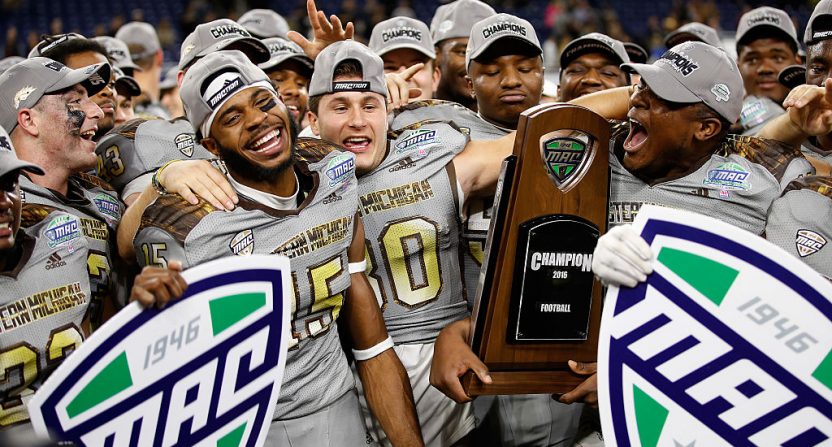 To those who have been paying attention, it was bound to happen. Over the years, the MAC has taken its football product to more and more weeknights in with the intent of establishing a national audience when there is minimal competition for viewers. This season, the odd scheduling hits a boil in November when the entire conference will not play a single game on a Saturday.

The idea behind the MAC’s scheduling philosophy is influenced by its partnership with ESPN. ESPN has loads of money invested in various conference media rights packages and wants to showcase the best possible product it can, but shuffling around games to maximize the return on investment had become tricky, and the idea of playing games on Tuesdays and Wednesdays started out as merely a way to add some content to the weekday primetime viewing on its various networks.

Over the years, the MAC has embraced the weeknight TV access even if the fans in the stands would get swindled. Getting the games on national TV took priority over the actual game day atmosphere and local fans paying money to come out and support the school. The stands may have been mostly empty, but the game was on national TV and that took priority from the conference’s overall branding initiative.

The last Saturday game on the MAC schedule this upcoming season will be played before Halloween on October 28. The MAC has just one game being played that Saturday, between Akron and Buffalo. The last full slate of Saturday football for the MAC will come a week earlier, with six games on the schedule.

As broken down by Eleven Warriors, in November, the MAC will play 12 games on a Tuesday, seven on a Wednesday, four on a Thursday, and three more on a Friday. Monday night is off limits due to Monday Night Football (as is Sunday, of course) and Saturday became the odd day out as a result. From a college football standpoint, that is just weird.

The issue may be that the MAC had no bargaining power to keep any games on a Saturday in November even if it wanted. The world of college sports has become run more and more to fit into the TV schedule, and the MAC simply does not stack up against the power conferences, and perhaps even some of the Group of Five conferences in college football. Every now and then the MAC will have a team like Northern Illinois or Western Michigan string together a nice run, but the markets covered by the MAC are overshadowed by bigger programs in bigger conferences, and those bigger schools tend to be playing more meaningful games in November. And because ESPN decides when the MAC can be fit into the schedule, the conference is at the mercy of the network and has few options until the contract is up.

The MAC is in trouble. The writing has been on the wall for awhile now. With the power conferences gaining strength and separating themselves even more from the mid-majors of the college football world, the divide only becomes wider and becomes more difficult for a conference like the MAC to keep up. Putting games on TV at any cost is what the conference has resorted to, because just having someone in Texas or Georgia or Florida watching a MAC game on a Tuesday or Wednesday night has become more valuable and lucrative to the conference than selling tickets to the games on these campuses. At some point, the leaders at the MAC universities need to come together and take a good look at what is happening and decide if the national TV exposure for a struggling product is worth the payday from ESPN or if it makes more sense to reinvigorate the product closer to home.

ESPN will not hesitate to cut the bait whenever the time may come that viewers stop tuning in to the weeknight MACtion, so the MAC needs to begin researching its alternatives and plans for long-term stability before it is too late.