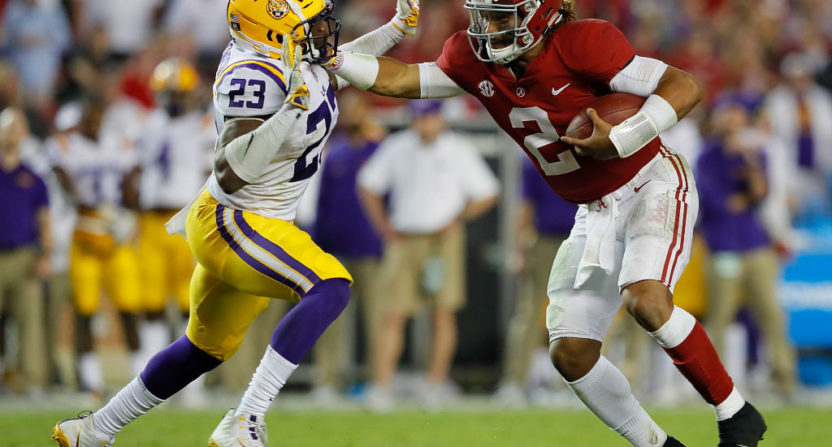 When you think of great college football rivalries in the new millennium, Alabama-LSU has to be at or near the top of the list for the most important game in the sport. The Tide and the Tigers have consistently been at the top of the national title picture with the SEC’s run of dominance through much of the early 2000’s. In fact, the two programs have combined for six national titles since 2003 with the rivalry culminating in the two schools representing the only intra-conference National Championship Game in the BCS era in 2012, won by Alabama.

However, in recent years (and especially since that title game clash) this great rivalry has become rather one-sided. You may recall that LSU beat Alabama during the regular season that year, but the Crimson Tide beat the Tigers in the championship game in New Orleans. That victory has kicked off a seven game winning streak for Alabama against LSU, which continued this past weekend with a relatively straight-forward 24-10 victory in Tuscaloosa.

At least according to the TV ratings, the Alabama-LSU rivalry isn’t quite what it used to be. According to Sports Media Watch, the game drew a 3.7 overnight rating on CBS, down a whopping 38% versus last year’s rating. That number was the lowest for the game in 11 years, dating back to 2006. Additionally, and even more peculiar, it was the lowest SEC on CBS primetime game period in that same timespan as well. Given Alabama is in the national championship chase pretty much by default these days, it’s surprising that ratings would be trending downward. Just two years ago, a #2 vs #4 showdown brought a 6.4 rating for the SEC on CBS for the Alabama-LSU rivalry game.

While it still beat the rest of the competition this weekend, it might be a sign that college football fans aren’t giving too much credit to Alabama’s competition in the SEC these days and that the LSU matchup isn’t an automatic primetime lock anymore. Just take a look at how Alabama has manhandled its biggest conference rivals recently…

While many of those teams also won championships in the last 15 years, they have all struggled to maintain a standard of excellence that is pretty much now a guarantee at Alabama. Florida just fired their coach, Tennessee’s is next out the door, and LSU fired Les Miles last year. The only SEC teams to beat Alabama in the last five years are Ole Miss (twice), Texas A&M, and Auburn on the Kick Six.

Of course, this all comes when the college football playoff committee has done Nick Saban’s dirty work for him by placing Georgia at #1 in the first rankings release and the Tide at #2. Given Alabama’s dominance over the SEC and over all of college football, pretty much everyone should be taking a wait and see approach to see whether or not the Bulldogs can actually compete with the Tide if and when they reach the SEC Championship Game.

But therein might lie the dilemma with Alabama and Nick Saban’s rule over college football with an iron fist. Their competitive advantage over pretty much everyone on their schedule means there’s not a lot of drama until the SEC Championship Game and playoff. Alabama could suffer a loss at any point this season and still safely be in the top four because they have that much respect from the playoff committee. It would take a supernatural series of events to take them out of the top four. As crazy as it sounds, Alabama might just be too good for the SEC, and it may be showing in the ratings.