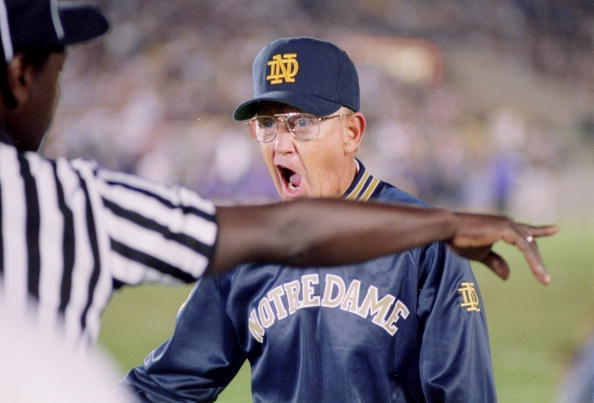 There’s usually controversy whenever sports and politics mix, especially in the hyper-sensitive political climate in which we currently reside. One such example came after comments Lou Holtz made at the Republican National Convention in 2016.

To catch you up and make a long story short, the Daily Beast said that Holtz had called immigrants deadbeats. A year later, Holtz sued the Daily Beast for defamation over their story, claiming the outlet had purposely misrepresented him and his comments. At the time, Holtz was seeking more than $75,000 in damages, claiming to have lost speaking engagements over the matter.

Well, now the matter is finally settled. Holtz and the Daily Beast have reached a settlement which includes a public apology issued by the Daily Beast reaffirming that Holtz did not use the word “deadbeats” when speaking about immigrants.

Via the Orlando Sentinel:

Hall of Fame football coach Lou Holtz received an apology this month from The Daily Beast to settle a defamation lawsuit he filed against the news website over an article that claimed he called immigrants “deadbeats” at the Republican National Convention in Cleveland.

The apology, dated May 8 and signed by Neil Rosenhouse, vice president of The Daily Beast, acknowledges Holtz never used the word “deadbeats” in his speech.

“While The Daily Beast stands by the rest of its story, we recognize that Mr. Holtz also spoke to his audience about his poor grandparents, who themselves immigrated to the United States and were processed through Ellis Island,” the apology read.

The Daily Beast article about Holtz’s comments also now leads to a 404 error.

Since leaving ESPN as a college football analyst, Holtz hasn’t been shy about sharing his personal political views, sometimes going full speed ahead into controversial subjects.

While that may come as a surprise to younger fans who know him largely from his time at Notre Dame and ESPN, Holtz actually has a lengthy history of being involved in politics.

In 1983 Holtz actually resigned from Arkansas after drawing scrutiny over a public endorsement of controversial North Carolina Senator Jesse Helms. Holtz also toyed with the idea of running for Congress in 2009 before ultimately deciding against it. He endorsed Donald Trump in the 2016 election.