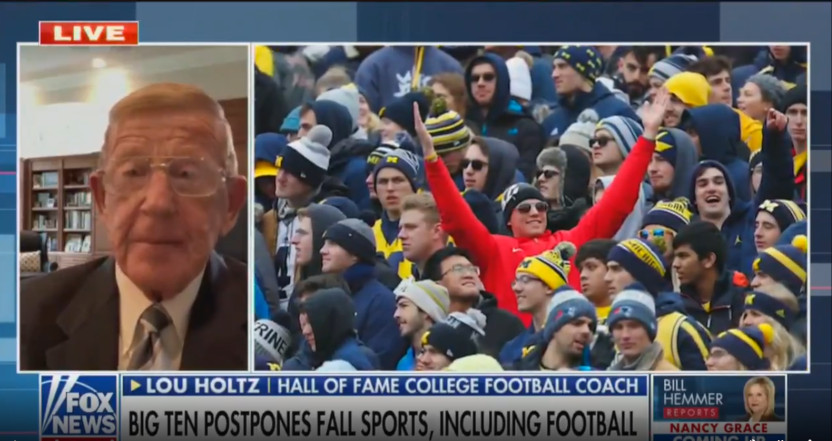 Back in early July, Lou Holtz went on Fox News to complain about the Big Ten cancelling out-of-conference games, saying “People stormed Normandy.” Holtz, a former college football coach and former ESPN CFB commentator (he left that role in 2015, but went on to some other media roles and quite a few political commentary spots), was roundly roasted for those comments at the time, but that apparently didn’t reduce his interest in political commentary, and it didn’t reduce Fox News’ interest in booking him. On Tuesday, after the news of the Big Ten postponing their fall season (which would be shortly followed by the Pac-12), Holtz again went on Fox News, and he again brought up the D-Day comparisons:

As many noted, this is a particularly funny analogy considering that Holtz was only seven “when they stormed Normandy”:

Lou Holtz was 7 when the Allied Forces stormed the beaches at Normandy.

Lou Holtz’s experience of D-Day as a 7-year-old is as relevant today as is his current analysis that college football is like Normandy.

Which, to be clear, is not at all.

It’s great that Fox News has continued to book someone who isn’t a recent coach (Holtz’s last coaching season came in 2004 at South Carolina) or analyst (Holtz’s last really high-profile analysis job was with ESPN, and that ended in 2015). And it’s really funny that they brought him on again to make the same Normandy analogy that he was previously roasted for. Fox News is clearly reading the room here.