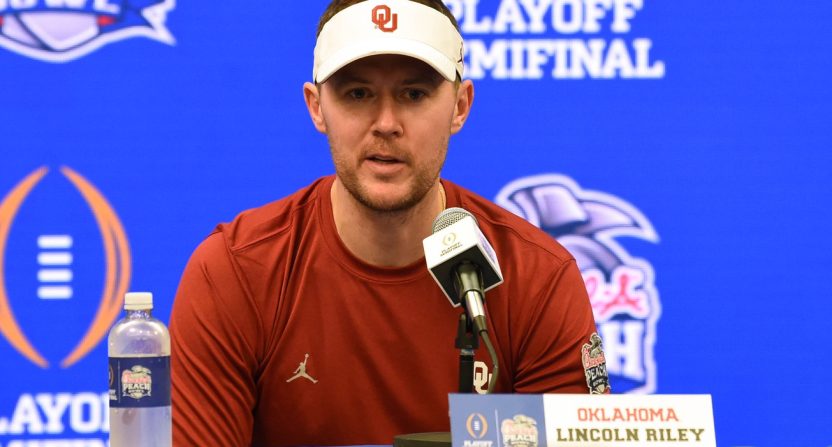 When a head coach leaves one college football program for a new one, it often happens very fast and without warning, even if the coach literally said it wouldn’t happen the day before. It might be something that fans and media should be used to by now, but it can still be a bit shocking at the moment when it all comes to an end.

Lincoln Riley, who has led Oklahoma to a 55-10 record and four Big 12 titles in five years, came into the weekend as perhaps the hottest head coaching prospect in the country. Despite commanding a program that is one of the sport’s blue blood programs and is about to enter the SEC, that hasn’t stopped some of the other big national powerhouses from looking in his direction to lead their own.

Word got out on Saturday that Riley was going to leave Oklahoma for the LSU Tigers. However, he denied those rumors, literally telling reporters “I’m not going to be the next head coach at LSU” and affirming his commitment to OU. In the end, he was 100% right about the former and 100% wrong about the latter.

Instead, according to The Athletic and ESPN, Riley accepted the head coaching position for the USC Trojans and has already left town to take over the former Pac-12 power in need of some serious rebuilding.

Dean Blevins watched all of this play out in real-time. The Oklahoma City sports TV and radio host has a few different jobs but one of them is hosting the weekly Lincoln Riley Show. As news started to trickle out on Sunday morning, Blevins was glued to the updates, wondering if his scheduled Sunday show was going to start on time.

Would be nightmare scenario. Including his No. 1 2023 Recruiting class that is Cali-centric. Beginning w QB Nelson. @news9 https://t.co/R1bZHWC4ii

Turns out, Blevins was initially told that Riley would be a few hours late before he was eventually told right at showtime that Riley would not be showing up to talk about the state of Sooners football this day. Or any day hereafter.

Again, this isn’t something that is very surprising from a macro level. We’ve seen this play out so many times before that we should only be surprised when stuff like this doesn’t happen. However, on a local level, the impact of a college coach leaving town in a cloud of dust can have tons of little impacts that affect many people across the football program, school, local media, and local business landscape. And it’s fair to have some sympathy for them, especially when they’ve been told time and time again that the coach would be there next week and for many more weeks to come.

This isn’t a good look for Lincoln Riley, in my opinion. From everything I’ve seen, he certainly didn’t handle any of this the right way and pretty much just bolted on Oklahoma out of nowhere. I’d say Sooners fans aren’t sad to see him go. https://t.co/KqIExW2xDB

Lincoln Riley stood up the crew of his own coaching show ? https://t.co/WrvR0n5jUa

The show will go on. Oklahoma is still Oklahoma, getting ready to become an SEC program, and they’ll surely bring in a new coach with bona fides of their own. The coach’s show will return with a new name, a new star, and new promises that he’ll stay there forever. Until, one way or another, he doesn’t. So it goes.