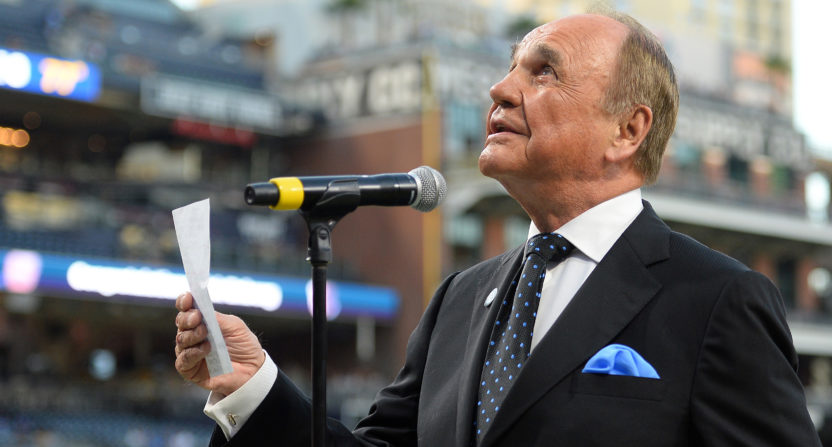 San Diego-Union Tribune columnist Bryce Miller reports that Hall of Fame broadcaster Dick Enberg passed away on Thursday morning in La Jolla, CA, according to Enberg’s wife Barbara. He was 82.

Incredibly sad news: Dick Enberg’s wife Barbara just told me Dick died his morning in LaJolla. Thinks it was a heart attack. Such a legend. Such a gentleman. There are no words.

This is just terrible news for the sports and media world.

Enberg served as a broadcaster or anchor for just about every sport and sporting event imaginable over the last 60 years for NBC, CBS, ESPN, radio stations, and regional sports networks.

He began his career in 1957 (through 1961) calling Indiana Hoosiers basketball and football, and finished his career as the play-by-play announcer for the San Diego Padres (2010-16).

In between, Enberg was the play-by-play voice of UCLA basketball in their dynasty years (1966-77), as well as the play-by-play man for the Los Angeles Rams (1966-77) and California Angels (1969-79; 85). He called eight Super Bowls (for NBC). He called the Summer Olympics, Wimbledon, the Australian Open, the French Open, U.S. Open (tennis), the Rose Bowl, Notre Dame football, and also contributed to The Masters and PGA Championship.

Enberg’s catchphrases included “Touch ’em all!” for home runs, and “Oh my!” when he was amazed by a play (if you’re an athlete and got an “Oh my!” from Dick Enberg, that’s definitely a special moment in your career).

I can say as somebody that lives in the San Diego area that Enberg will be very, very missed around here.

And last year, I happened to catch a fantastic hour-long special about Enberg and his retirement that was shown on Fox Sports San Diego. I really hope the full program will be shown nationally as a tribute or at least available online, but there was a moment to conclude the show that was especially touching about Enberg’s relationship with his father.

Oh my god. Dick Enberg's closing words on this fantastic 1-hour special on him. pic.twitter.com/eJnjDOnWKU