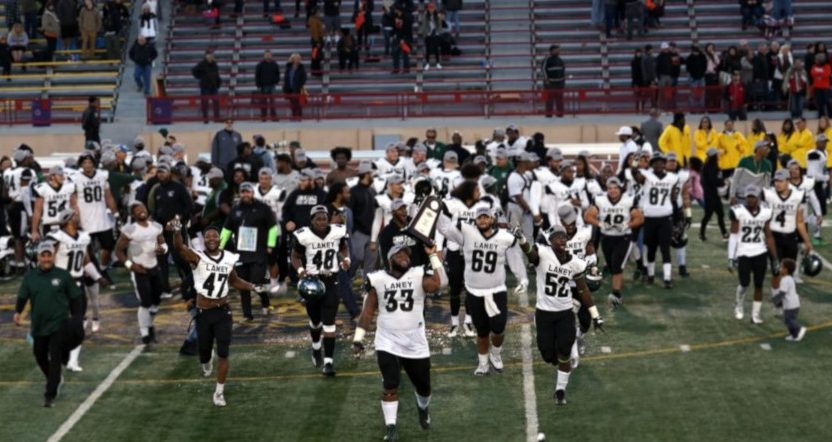 Ready for another season? Last Chance U will return to @netflix in 2020. This time, at Laney College in Oakland, CA. pic.twitter.com/YfqPWbhsSX

There are a few notable things with this choice, and one is that the series is returning to a college that’s had a lot of recent on-field success. East Mississippi Community College had won National Junior College Athletic Association championships in 2011, 2013 and 2014 ahead of the show covering them in 2015 and 2016 (they were disqualified from the state playoffs in 2015 after a brawl, but won the state title in 2016, and then won state and national titles in 2017), while Independence was more of a rebuilding project that had only had one winning season before the show began covering them. And Independence’s quest for national success came up quite short in both 2017 and 2018, with head coach Jason Brown eventually resigning in early 2019 following an “I’m your Hitler now” text scandal and then later being charged with felonies for impersonating a lawyer and trying to silence local newspapers.

Meanwhile, the Laney Eagles are coming off an impressive 11-2 season, which saw them win their first-ever California Community Colleges Athletics Association title and then pick up the highest junior college ranking (and a ranking higher than some Division I schools) from Massey Statistics. (However, that doesn’t make them NJCAA champions, as the NJCAA doesn’t include California; last year’s NJCAA title game saw East Mississippi beat Garden City 10-9.) So it seems likely that the on-field stories here may be closer to what we saw in the first couple of seasons of Last Chance U rather than what we saw at Independence. And football head coach and athletic director John Beam (who’s been at the school since 2004, and has been the head football coach since 2012) told Jon Becker of the San Jose Mercury News he thinks the show’s name isn’t accurate for his program:

“I told them we’re not ‘Last Chance U,’ ” Beam said. “We’re your first chance. We’re your Best Chance U.

“I said you’re not (rejects). All those kids from the other shows either left school, got kicked out from a four-year school or something. Well, that’s not us. You’re the kids who came here for a reason. To better your grades or better your football outlook. We’re your best chance.”

Of course, just because the Eagles were successful in 2018 doesn’t mean that will remain the case this coming year while the documentary covers them. But Beam has quite a history of success over his 40-year coaching career,  which has covered both the high school and community college levels, and he has a resume that looks closer to that of long-time EMCC coach Buddy Stephens rather than former Independence coach Brown. And it certainly sounds like the show is aiming to go back to covering already-prominent teams rather than rebuilding projects like Independence. But we’ll see what happens with Laney football this season, and we’ll see how the show turns out when it’s released in 2020.