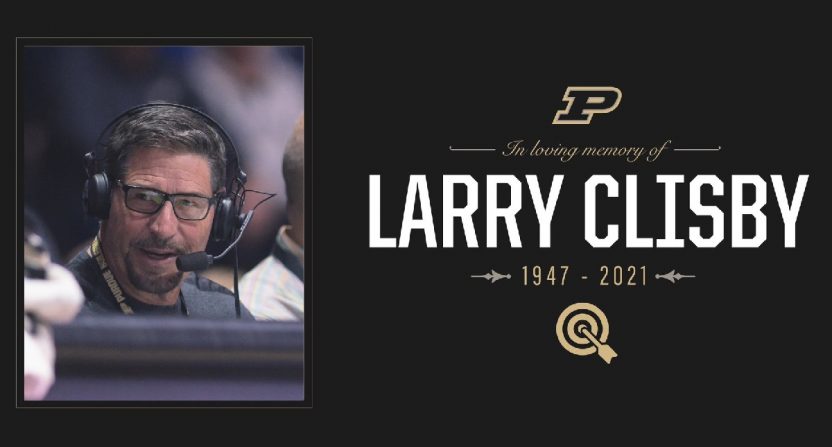 The Purdue Basketball team mourns the loss of longtime radio voice Larry Clisby. He was a part of our team for over 40 years and as big a part of our program as anyone.

We will miss you Cliz.

As a young Purdue fan listening to Larry Clisby during a tough season 14 years ago, I felt compelled to email him to tell him that even during bad years it was great listening to him on the radio. He replied. pic.twitter.com/boDtPRenMD

Absolutely heartbroken this morning. Larry Clisby was my hero growing up, and one of the major influences that spurred me into sports media. The best in the business. ? ? #Purdue https://t.co/34ajsPIPCU pic.twitter.com/NovKygXH1R

We wrote in 2018 about his battle with Stage 4 brain cancer, and how he managed to beat it to be able to return to broadcasting that fall just months after his diagnosis.

They don’t get quite as much publicity as national broadcasters or professional announcers, but a college broadcaster has an incredibly strong connection with their team’s fans. That’s especially true if you’ve called games for as long as Purdue’s Larry Clisby has; he’s been the voice of Purdue basketball since 1984, and has been calling Purdue games on the radio since 1977.

Every fall, Purdue fans have been able to count on Clisby’s presence, so from that perspective the fact that he’ll once again be back on the air this year isn’t that surprising. When you learn that just four months ago Clisby was diagnosed with Stage 4 cancer that had spread from his lungs to his brain, his return is incredible.

Clisby officially retired in November, having called 1,189 Purdue basketball games. In a statement upon his retirement, Clisby looked back on that career with a palpable sense of pride:

“For 40-plus years, Purdue Basketball has been a big part of my life, but I am ready to enjoy retirement and watch the Boilermakers from afar,” Clisby said in a statement. “There have been many great moments working with this program over the last 40 years that I can’t begin to name them all.”

“I want to thank coach (Gene) Keady and coach (Matt) Painter and all of our listeners for all of their support and friendship. I will always be a huge Boilermaker fan.”