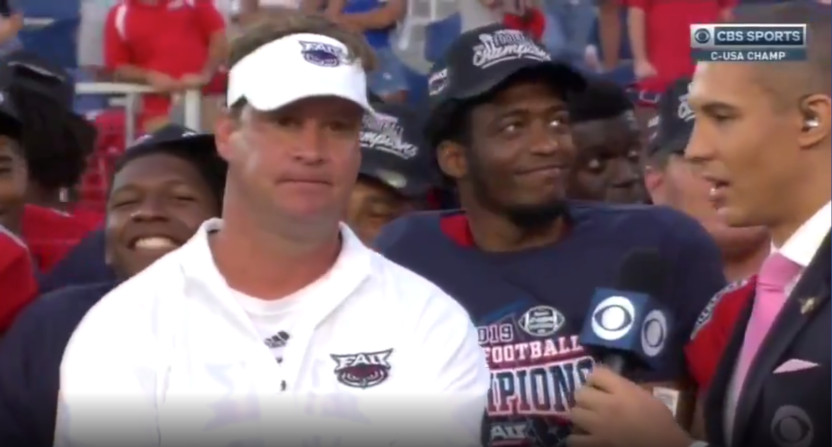 There had been a lot of speculation about what’s ahead for Florida Atlantic Owls head coach Lane Kiffin over the last week, with Kiffin linked to jobs at Ole Miss and Arkansas (and with technical difficulties during a radio appearance furthering that talk). That talk further intensified Friday night when ESPN’s Mark Schlabach, Adam Rittenberg and Chris Low reported that Kiffin was finalizing a deal to head to Ole Miss, and that became a subject of discussion as Kiffin and the Owls beat the University of Alabama-Birmingham Blazers 49-6 in the Conference USA championship game Saturday. That led to a somewhat-awkward postgame on-field interview when CBS sideline reporter John Schiffren asked Kiffin if this was his last game with the Owls:

Lane Kiffin laughed and deflected when he got asked about taking the Ole Miss job. pic.twitter.com/7inpbHfdd9

Honestly, though, Schiffren’s “There’s been a lot of speculation this week; was this your last game coaching as the head coach for FAU?” is a fair way to phrase that question (and it’s likely one producers were telling him to ask), and Kiffin’s response of “This is not about that. Today is about our team, our fans, our university, winning two championships in three years is awesome, so this is an awesome day for everyone” is a good way to handle that question. It would certainly be more awkward still if he’d talked about leaving the team while they’re surrounding him on the field with the trophy. Instead, Kiffin shifted the focus to his players and to the school. And further to his credit, Kiffin actually confirmed the news of his departure in a postgame press conference (after FAU announced it as well), which was a nice change from the many awkward non-comments we’ve seen in similar circumstances. That press conference also felt like a more appropriate venue to address this than during the post-game interview:

At any rate, while this wound up being a bit awkward, everyone involved was doing what they were supposed to do, with Schiffren asking an important question and Kiffin putting the focus back on his team and deciding to not fully answer it until later. And it could have been much more awkward if Kiffin had responded differently.