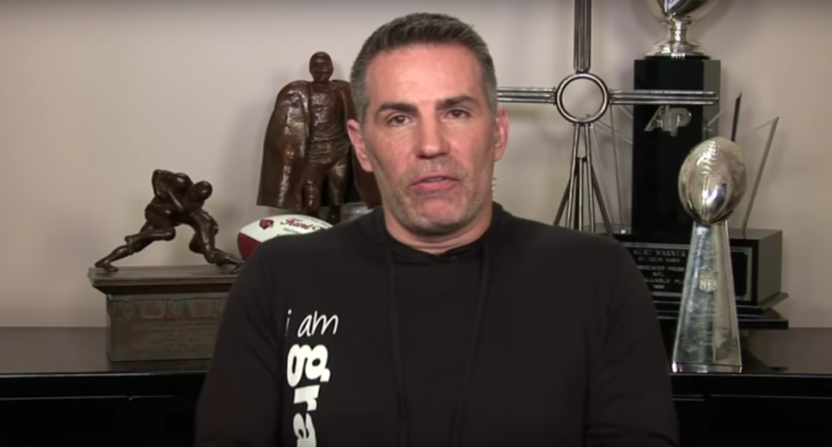 New Arizona State head coach and former ESPN NFL analyst Herm Edwards might get some help from another NFL TV analyst. That would be NFL Network’s Kurt Warner, the former Arizona Cardinals’ quarterback who still lives nearby. As Shane Dale of Phoenix’s ABC 15 reports, Warner said this week he’s “open” to helping Edwards in any way he can:

“I’m always willing to help anybody if I can,” Warner said. “Knowing Herm, obviously this is a big jump for him, but I know he’s up for the task.”

“I just always keep myself open. If there’s anything that I can add or any expertise that I can give, whether it’s a player, an organization, a university, Coach Herm — any of those people.”

…”I’m not back here begging for a job. I’m not looking to be an offensive coordinator at the college level,” he said. “I just make myself available (and) if anybody can use me as a resource, I’m happy to do that.”

It seems unlikely Warner’s going to take on a full-time job with ASU, especially as the Sun Devils have already promoted wide receivers coach Rob Likens to replace Napier, but it’s definitely interesting that he’s ready to help if Edwards wants him. It’s also interesting that Warner considers Edwards “up to the task,” as that’s far from the media consensus.

If Warner does wind up taking on an official or unofficial role with Arizona State, that isn’t necessarily a huge conflict of interest with his NFL Network role given his focus on the pro game there. But it’s something that should be disclosed if and when relevant; say, for example, if Warner’s in an on-air conversation about particular Sun Devils’ NFL prospects. That’s several steps down the road at this point, as we don’t even know that Edwards is interested in Warner’s help, but it’s worth keeping an eye on.

And this discussion is also notable from the standpoint of something that might eventually lead to Warner leaving the media for a coaching job. He may be saying he’s not looking to do that right now, but a smaller or unofficial role could provide some experience that leads to him getting offered a college offensive coordinator job one day, and if that deal’s good enough, it may be enough to convince him to leave NFLN. It’s also possible that Warner might even be offered a head coaching job directly at some point. Hey, the NFL analyst to college head coach pathway worked out for Edwards…

[ABC 15; screengrab from this video]