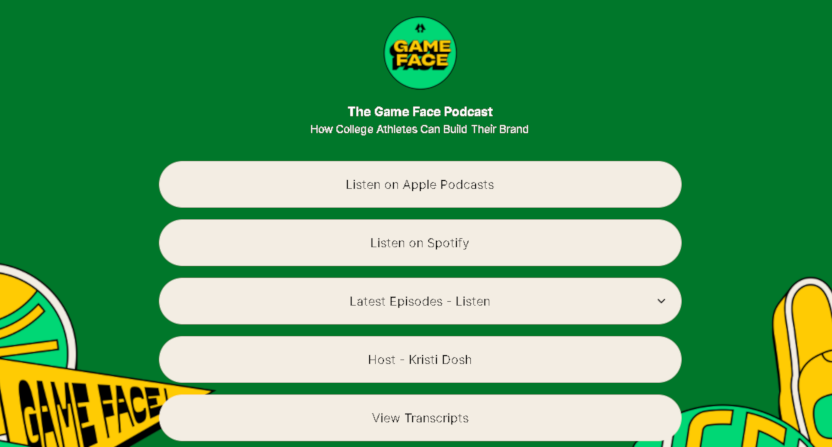 Kristi Dosh has been covering business aspects of college sports for years, including at Forbes, through her own Business of College Sports site and podcast, with her Saturday Millionaires: How Winning Football Builds Winning Colleges book, on Twitter at @SportsBizMiss, and through talks and presentations at individual schools. She recently teamed up with linking platform Linktree for the new Game Face podcast, which has her talking with current student-athletes, agencies, business executives and more about the opportunities name, image and likeness legislation presents for athletes and how they can best take advantage of those. Dosh spoke with AA recently and said this opportunity was perfect for her, with it coming from a platform she already used and on a subject she was already highly engaged with.

“I have to say, as soon as I saw the email subject line and saw that it was something that Linktree wanted to do with me, I felt really honored. I’ve used Linktree for years in my Instagram bio, because it makes it so much easier for all the links that I wanted to share with people.”

“And I was really honored that they’d reach out, and excited, because NIL has become my whole life for the last year. I have really shifted all of my reporting to NIL. And I’ve always been passionate about working with student-athletes on their personal brand, but that was always with an eye of developing this brand that they were going to use after graduation, because frankly, there wasn’t that much they could do with it right then and there. When NIL came out, I realized I was going to have the opportunity to work with them on branding in a way they could not only monetize, but really leverage in the here-and-now while they were student-athletes.”

“I knew I wanted to dive into that more, so when Linktree reached out and said they were creating this podcast and it was going to be all about student-athletes building their brand, I just thought that that was perfect. Because I’ve been going into athletic departments and doing that for the last decade. So to have a platform like Linktree to help me do it on a bigger scale than just me going one-by-one to athletic departments, that was a really exciting opportunity.”

Dosh said Linktree can be a useful tool for student-athletes as well, especially with NIL deals often featuring terms on where brands get mentioned and what links are included with that.

“I was using Linktree before they even came to me, and it’s been funny looking up student-athletes that I want to have on the podcast and seeing how many of them are already using it. Because an interesting trend that I’ve seen emerge, with my lawyer hat on, is that brands want their handle and sometimes a link in your bio. That’s valuable real estate for them, but you only have so much, and depending on the platform, some of them are shorter than others. So that’s valuable real estate for you as a student-athlete to give away. So I love that Linktree is this amazing tool for them to use to be able to work with multiple brand partners and have them featured in their profile; they can even set up a storefront and have commercial links in their profile.”

“So as much as I was excited about it because I already use Linktree in my own bio, I think there’s this nice intersection between what Linktree has already been doing and what student-athletes are having to learn to do. I think a lot of them are approaching their bios differently than they ever have before because of the demands that brands are making. So it’s just this really nice synergy between this personal branding stuff that was important to me, and that Linktree was already doing, and now this new world that student-athletes have to navigate as well.”

The combination of state NIL legislation and NCAA rule changes that kicked in this summer has dramatically impacted the landscape in a short amount of time, and Dosh said that’s also led to changes in what she does, from writing to podcasting to presenting to athletic departments.

“I’m a lot busier. It’s sort of fast and furious, and it changes so much, because you do have this patchwork of laws from some states having laws, some not, some who have passed laws but they’re not in effect yet. And then there’s the question of how this applies to high school students. There are so many issues around it that keeping up with the knowledge base you need to even be able to write about it, or to advise student athletes at any level, is a day-to-day task. I just went on vacation for 10 days and came back and I’m still catching up on all the stuff that happened when I was gone.”

She said the NIL picture also changes significantly depending on individual states, but her goal (especially with Game Face) is to try and cover information that’s relevant to athletes nationally.

“A lot of my focus, both in my writing and with this Game Face podcast, has been those foundational things that are the same for everybody, about ‘What is your personal brand? What does that actually mean? And how do you cultivate it? And how do you intentionally shape what that brand is, with an eye towards what you want to do after graduation? And how do you use social media? What are ways you can monetize your NIL without having to be on social media, without having to have hundreds of thousands of followers?’ Those kinds of things are the same no matter where you go to school, no matter what sport you play, male or female. So most of the focus has been on those foundational things that everyone can use.”

“There are little differences from state to state, like in Colorado, you can work with a gaming company, but in most other states that have a law, you can’t. Those little nitty-gritty details, I might report on as a reporter at Forbes or for my own site. But much of my writing and everything we’ve been doing at GameFace, it’s those foundational details that apply to everyone.”

Dosh said what those athletes already know and what they have available to them is also quite different depending on their school and level, but she thinks there’s still a lot of things that are more universal.

” If you’re talking about a Power Five athletic department versus a Division II athletic department, there are differences in the resources and the education that student-athletes have available to them. So it’s also been interesting to try and figure out how to best help student-athletes no matter what level they’re at and no matter what their school is providing to them, as it’s really different across the board.”

One interesting element out of NIL so far has been deals in sports well beyond football and men’s basketball. There were some suggestions ahead of this legislation that it would only help the most famous men’s athletes at each school, but there have been a lot of big deals involving female athletes. And Dosh said that makes sense to her, and fits what we see in other areas of the influencer world.

“I was actually surprised by how many people thought women weren’t going to benefit from this. I understand that male sports, especially football and men’s basketball, get more of the media attention, so sure, absolutely, that helps build your platform. But if you look at the traditional influencer world, and I’ve worked with female influencers and entrepreneurs for years outside sports, if you look at that space, there’s far more female influencers than male influencers. And women control so much of the buying power in the United States. I always thought women would have some of the best opportunities to monetize their NIL, particularly through things like social media.”

“And we’ve seen it happen not just for women that have hundreds of thousands or millions of followers. They’ve got some of the big blockbuster deals and headlines that we write about on Forbes, but I’ve also worked with a Wichita State softball player [Syd McKinney] who’s done about five or six NIL deals now, and no one knows her name, I’ve never watched a Wichita State softball game, and she still has a brand, she still has a personal platform. She only has about 1,500 followers [on Instagram, plus around 700 on Twitter], but she has a really unique personality and some unique skills that she’s leveraging.”

“So I think there are opportunities available across the board for female athletes, especially if they can really hone in on the things they’re already passionate about. Like [McKinney], she’s already passionate about art, she does sneaker art. It has nothing to do with the sport that she plays, but it was about learning how, now that she’s allowed to use her name, image, and likeness, how do you use that opportunity to really grow this other thing that you’re passionate about?”

Read on for more from Dosh on NIL deals benefiting charities, group NIL deals, and what she hopes to accomplish with this podcast.