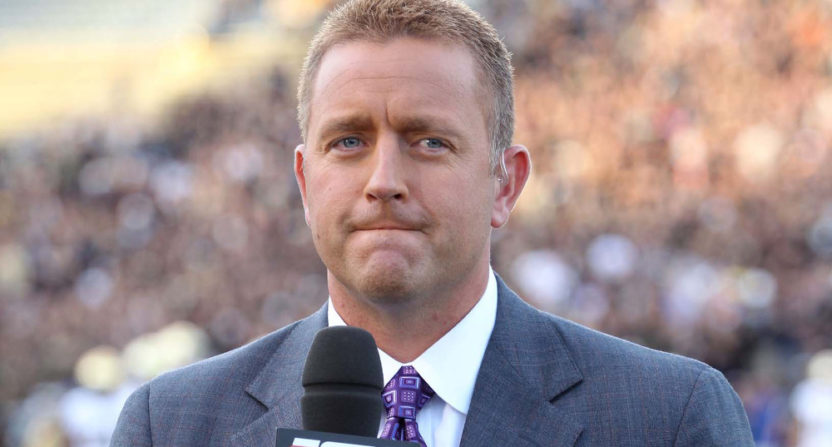 The 2020 college football season is set to kick off with “Week Zero” on Aug. 29. That’s 22 weeks from now. We’re talking about five months. That seems like an awfully long time remaining before any decisions have to be made on whether or not we’ll have a college football or NFL season this year.

On ESPN Radio late Thursday night, college football analyst Kirk Herbstreit was asked for his thoughts on the matter. And many football fans probably won’t like what he had to say.

“I’ll be shocked if we have NFL football this fall, if we have college football. I’ll be so surprised if that happens,” Kirk said on the “Freddie and Fitzsimmons” show, according to TMZ Sports.

Last Words on not ending well for @MLB @NBA @NHL @KirkHerbstreit on NO football plus when whiskey will help save lives. NOW w/@Ianfitzespn on @ESPNRadio and @SIRIUSXM Channel 80. pic.twitter.com/DvqBmkCnSL

Given what Herbstreit said, it’s a little bit surprising he wasn’t asked to repeat his concerns elsewhere, like on ESPN’s morning show, Get Up. But maybe their lineup and topics were already planned out for Friday. As mentioned already, football season is months away and other topics are probably more pertinent. And maybe that’s not a sentiment ESPN really wants to boost right now.

Yet as could be expected, expressing the notion that we might not have football this year stirred up quite a reaction among fans on social media. Many were not happy about Herbstreit hitting what many consider to be a panic button, though most just seem irrationally unhappy that he would dare be pessimistic. Here’s a sampling:

@KirkHerbstreit I hope the NFL and NCAA dont take your advice and prematurely cancel the upcoming fall seasons. We'll have a country full of healthy football fans pissed off due to unreasonable fear of an epidemic largely overcome months earlier.

@KirkHerbstreit Please shut up and stop with your fear mongering. You DONT KNOW when the college and NFL seasons will start. Stop acting as if you do and putting more fear into the American people. We are getting enough of this crap. STOP WITH IT. You are not an expert.

@KirkHerbstreit is doing exactly what @espn wanted him to do. Make some statement that all their talking heads can talk about for the next 48 hours+ to fill airtime.

Kirk Herbstreit needs to keep his freaking mouth shut. He’s not a scientist or a doctor. He’s a football analyst. He needs to stay in his lane and shut up.

Others, however, think Herbstreit was right to address what’s increasingly looking like a very real possibility.

Kirk Herbstreit said something we’ve all been thinking/wondering about and people are hammering him for it. Tensions are running high, folks.

No, Kirk Herbstreit is not a doctor. But Brian Kelly saying that they need to start off season training by July is a pretty big indicator that football season is in real jeopardy.

From a liability perspective alone, college football is a nonstarter for the foreseeable future. Has nothing to do with how bad fans want it back.

Kirk Herbstreit has become an identifiable name in college football as a thorough analyst. We can all hope he is wrong and there is a turnaround with this pandemic before July or August, but we also must pay heed to the safety concerns for all of us as we get through this. https://t.co/ptpO2VwqZm

No, Herbstreit’s expertise is in college football, not disease control and epidemiology. That’s understood.

Yet nothing is certain these days as the novel coronavirus outbreak continues to grow throughout the United States. The sports world has been shut down for the safety of athletes, fans, and everyone else involved with staging events. College sports are canceled through the summer. The NBA, NHL, and MLS are wondering when and if they’ll resume play. The 2020 Tokyo Summer Olympics have been postponed.

It’s natural to ask some of the same questions about football.  In college, spring practices have been canceled. The NFL Draft will proceed as scheduled, but what about minicamps and OTAs? Will training camps be held if the nation is still in lockdown and still other sports still haven’t resumed?

The Olympics were set to begin on July 24. NFL teams usually report to training camp around the same time. College football teams typically report for fall camp a week or two later on the calendar. So is it really that outlandish to believe that conditions still might not be safe for athletes and coaches to gather together in enclosed spaces, let alone being able to hold games with stadiums full of thousands of fans?

I’m not sure how many people on here are mentally prepared for the idea that football season is in jeopardy. It has been *the* topic of conversation this week in college athletics.

Are analysts like Herbstreit and reporters such as USA Today‘s Dan Wolken really fearmongering and inciting panic by acknowledging something that could happen?

As Wolken tweeted, this is something being discussed throughout college athletics right now. How could it not be when every other sport is having the same conversation? Just because football season is months down the line doesn’t mean that planning shouldn’t take place. Some would argue that not doing so is what led to this crisis.

Besides, Herbstreit’s job is to express an opinion based on what he sees, what he researches, and what decision-makers in the sport tell him. That’s exactly what he did here. It’s an unpopular view many would prefer not to hear right now. But it doesn’t mean it shouldn’t be expressed.