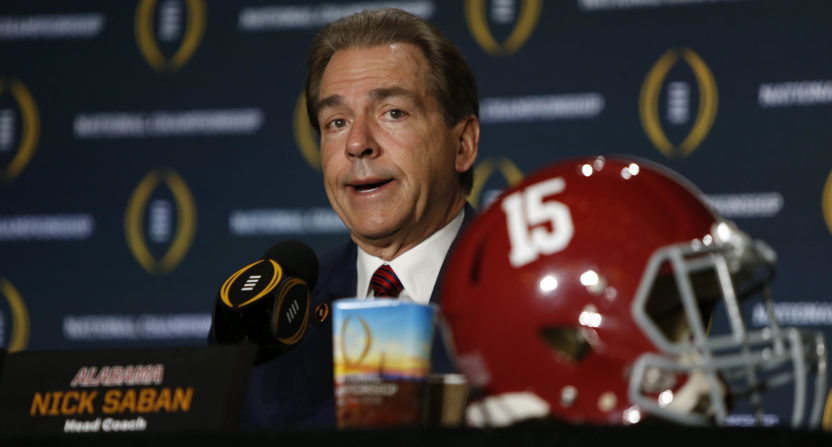 Outwardly at least, Nick Saban might be the most boring man in sports. The Alabama coach speaks in brief, Belichickian grunts, smiles sparingly and begins preparing for the next season as soon as the previous one ends. His existence is so consumed by football that he claimed in 2016 to have been unaware of the presidential election.

But according to some people who would know, Saban can also be something close to a regular guy. In a piece by The Boston Globe’s Chad Finn, ESPN broadcasters Kirk Herbstreit and Chris Fowler (who will call the college football title game Monday) said Saban is actually pleasant to talk to in pregame prep. Herbstreit in particular stressed that the version of Saban who grumbles his answers from a podium is different from the one he encounters behind the scenes.

Herbstreit said Saban is his favorite college coach to talk to when preparing to call a game, even referring to him as a “normal” guy. Fowler agreed that Saban is informative and pleasant in meetings with the ESPN crew, but wouldn’t go so far as to call him normal.

Herbstreit’s point about Saban being different with the cameras on is probably important for sports fans and reporters to keep in mind when considering high-profile athletes and coaches. Even when it feels as if we really know people in the public spotlight, we really know only the version of themselves they have chosen to present. Just because Saban doesn’t come off like a charmer at press conferences doesn’t necessarily mean there’s not more there. Herbstreit sees a side of Saban others don’t. Saban’s family presumably sees a side of the coach Herbstreit doesn’t. Everyone has layers. Even someone who barely grins after winning a national championship.

The Globe piece also included some interesting quotes from Fowler on concerns that the title game will draw poor ratings because it is an all-SEC matchup. Asked whether SEC fatigue might drive down viewership, the play-by-play man said:

“Potentially,” he said. “I think that we try to stay away from worrying about the business side of the matchup and the implications and just call the game. That’s where the enjoyment lies for Kirk, myself, and our entire production team.

“Certainly there are people at the network that are very concerned about the ratings and things like that. But honestly, there is not much you can do about that.

The College Football Playoff championship game airs next Monday at 8 p.m. ET. Then you can tune in to the postgame press conference to see whether Saban cracks a smile.