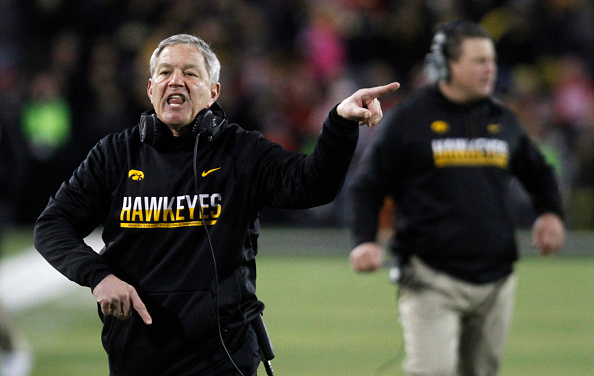 Former ESPN college football analyst Ed Cunningham announced he was leaving that role in a New York Times profile last week, saying his decision was because he felt uncomfortable promoting a dangerous sport. That sparked massive waves of discussion across media outlets, with much of the focus on his comments on concussions, CTE, and suicides of former football stars. However, comments Cunningham made that weren’t specifically about brain injuries may have provoked the sharpest response.

In that profile, Cunningham said the last straw was calling last December’s Outback Bowl and watching the Iowa Hawkeyes leave quarterback C.J. Beathard in during a blowout loss while he was taking significant hits. A week after Cunningham’s comments were published, the university has now shot back with a statement from Hawkeyes’ head coach Kirk Ferentz, defending his actions and calling Cunningham’s comments “surprising and offensive“:

“As a seasoned head football coach and the father of three sons who have played collegiate football, the health and safety of our student-athletes is a top priority of the Hawkeye Football program. We have a strong relationship with the medical staff and medical experts at the University of Iowa. Each player is fully evaluated and all established protocols are followed prior to the decision to play and during the game.

Comments made by a retiring sports broadcaster about the coaching staff subjecting a player to possible long-term health related issues because we allowed him to play in the Outback Bowl were surprising and offensive to our coaching staff, the player and his parents. We do not allow a student-athlete to play unless he is medically cleared – that is my commitment to our players and their parents.”

Iowa’s statement also includes comments from Beathard’s father Casey that the Iowa coaching and medical personnel were “very thorough and diligent in addressing any injury situations.” And Ferentz also discussed this in a press conference Tuesday. Here’s what he said there, from Ryan Connors at Land of 10:

“I found it offensive a little quite frankly because he wasn’t at risk medically,” Ferentz said.

For reference, here’s what Cunningham actually said about Beathard:

The last straw, he said, was working the Outback Bowl in December, when he saw the Iowa quarterback C.J. Beathard hobbled, taking hits and being left in the game until the final two minutes of a 30-3 blowout loss to Florida. Beathard went on to be taken in the third round of the N.F.L. draft by the San Francisco 49ers. The bowl game (“a game that means less than zero,” Cunningham said) still rankles Cunningham.

“I know some of the coaches from that team, known them for years,” he said. “And it was hard for me not to walk down after the game and just say: ‘Dudes, what are you doing? Really? What are you doing?’ These are just kids.”

Cunningham teared up again. “I get emotional,” he said.

It’s understandable that Iowa and Ferentz want to push back at comments questioning that decision, but it’s notable that Cunningham never said Beathard wasn’t medically cleared, or that leaving him in that game was irrevocably going to cause medical issues. Comments from a broadcaster wondering why a quarterback’s still in a blowout game are a regular occurrence, especially if the quarterback’s taking heavy hits. And Ferentz’s “he wasn’t at risk medically” seems a bit silly; he presumably means that Beathard had no medical condition going into that game and suffered no obvious medical condition that would necessitate removing him during it, but every player in a football game is at risk medically.

This whole situation is interesting because of the timing and the context. Comments questioning leaving a quarterback in a blowout win or loss are not unusual, from announcers, other media or fans, but they usually don’t generate this much blowback from the school, especially not almost a year after the fact. However, it makes sense that Ferentz and Iowa don’t like being mentioned as a negative example in a story that’s largely about brain trauma in football and its long-term effects (even if there was no specific reference to head injuries in the Beathard quotes), and that they want to push back against it.

This backlash may be somewhat counterproductive in the end, though, especially considering that Iowa’s coming out with it over a week after Cunningham’s comments. If they’d put this out initially, it would have been discussed in at least some of the coverage of those comments (well, at least in any coverage focusing on Iowa and the Outback Bowl, which honestly wasn’t a huge part of that piece or the implications of it.) But that story had already blown up and died down again by Tuesday; it’s still remembered and relevant, but it’s not top of the college football discussion any more.

This pushback from Ferentz and Iowa adds some fuel to that fire again, and it will definitely get people looking more closely at that Outback Bowl and weighing in on if they agree with Ferentz’s use of Beathard or not. By pushing back against this story so late in the game, Iowa’s drawn more attention to it. It’s understandable that they don’t like being associated with a story about head trauma and concussions, but this blowback isn’t going to help them disassociate from it.