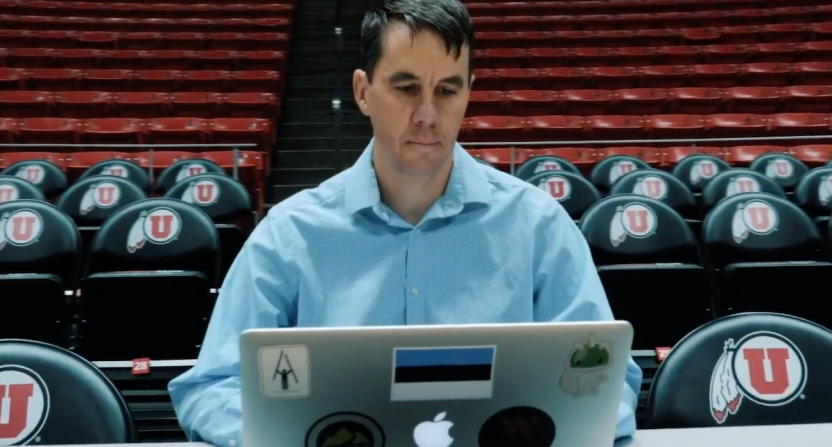 If you watch college basketball, you know about the Pomeroy Ratings. But perhaps you’re not as familiar with the man behind the data.

Ken Pomeroy, a former meteorologist for the National Weather Service, now forecasts college basketball. His statistical information on Kenpom.com is frequently cited on broadcasts. But despite being the sport’s most respected advanced metrics expert, you do not see his face on TV often.

Awful Announcing caught up with Pomeroy to discuss his life as a weatherman, and how he transitioned to becoming a stats guru.

You have a civil engineering degree from Virginia Tech. What was the original plan?

“There wasn’t. That was the problem. I didn’t have concrete goals out of college. I ended up going to graduate school (at Wyoming) and getting a degree in meteorology. That’s what I ended up doing for 12 years for the government.”

“I really enjoyed it. It was the National Weather Service. The people who oversee the tornado warnings. It was fun making a prediction and seeing that prediction play out the next day and affecting an entire state.”

How accurate were you?

“That’s a hard question to answer. I’d like to think that over time, I got better. Part of my job at the end of my career was measuring other people’s forecasts and giving feedback on how they could improve. Overall, I thought we did a pretty good job.”

How did you get into basketball analytics?

“I’ve always been mathematically inclined. I read all of Bill James’s works growing up. I like sports and I like math. I gravitated towards college basketball as my favorite sport.”

Why college basketball in particular?

“I grew up in Northern Virginia in the late 80s, early 90s. During my formative sports-watching years, college basketball was really good back then. The Big East and ACC were a big deal.”

Was there a team you rooted for?

“Virginia and Virginia Tech had pretty good programs in the 80s. I rooted for them. I eventually went to college at Virginia Tech, so I had to renounce my Virginia fandom at that point and pledge my loyalty to the Hokies.”

How did you transition from meteorology to doing sports analytics?

“(College basketball analysis) just gradually took up more and more of my time, to the point where I had two jobs. I had to decide which one I wanted to do full-time. That was 2012. Be my own boss. Set my own hours. I haven’t looked back.”

How has the acceptance of your data evolved?

“I was doing a little work for ESPN TV, providing them with statistical nuggets for various games. It ended up not going that well. Maybe it was too ahead of its time. It was 2007. Guys like Dick Vitale and Bill Raftery are not going to talk about arcane statistical things.

“I did it for about 50 games that year. Probably saw one thing make the air. Now, a lot of my stuff makes the air and I’m not working for anybody.”

What do people get the most wrong about your analysis?

“They think that my rankings should be rewarding teams for wins and losses. But the purpose of the rankings is to try and predict future games. I had Ohio State favored over Duke. Duke’s probably a better team in the long run but homecourt advantage makes a difference.

“Ohio State was favored, and they ended up winning. Ohio State fans think they should shoot up my rankings. They probably didn’t shoot up much because they were expected to win a close game and they won a close game.”

Last year, you were annoyed at CBS/Turner for using your data without attribution. Has that been resolved?

“We’ll see what happens in the next tournament, I guess. That was a weird situation. Every game they were mentioning some obscure stat that I’m pretty sure they could only get on my site. I don’t demand that people give me attribution every time they use my work, but every once in a while… just give a source a shoutout every now and then.”

What would you change in broadcasting?

“To me, it’s more interesting to know what a team’s 2-point percentage is and what’s their 3-point percentage. How many attempts are they taking on both? It’s a better way to analyze shooting and it’s easy to understand.”

How many games do you sit down to watch per week?

“I’m probably a regular avid fan. Whenever I’m home in the evening, the TV is probably on to a college basketball game. There are probably not that many games I’m watching from start to finish. There are so many options. I probably watch significant parts of eight to 10 games a week.”

Anything stand out so far about this season?

“Things are a little slower-paced. Pace is down a possession and a half, or two possessions per game from previous seasons under the 30-second shot clock. That’s a little surprising to me given that on the professional level, things are trending the other way.”

Has any player surprised you?

“Colin Castleton at Florida. His track record was not to be any big-time efficient scorer. It’s not that unusual to see a jump from freshman to sophomore. You’re kind of seeing that from (Purdue’s) Jaden Ivey. But to (vastly improve) from junior to senior is pretty unusual. To me, he’s probably the most surprising player in the country at this point.”

Is there a fanbase that constantly says you’re wrong?

“It depends on the rankings. I don’t reward teams just for winning. If you win a lot of close games against not great competition, you’re going to be ranked a lot lower in my system than the fanbase probably thinks. It depends on a given season. There’s not one fanbase consistently sending me hate Tweets.”