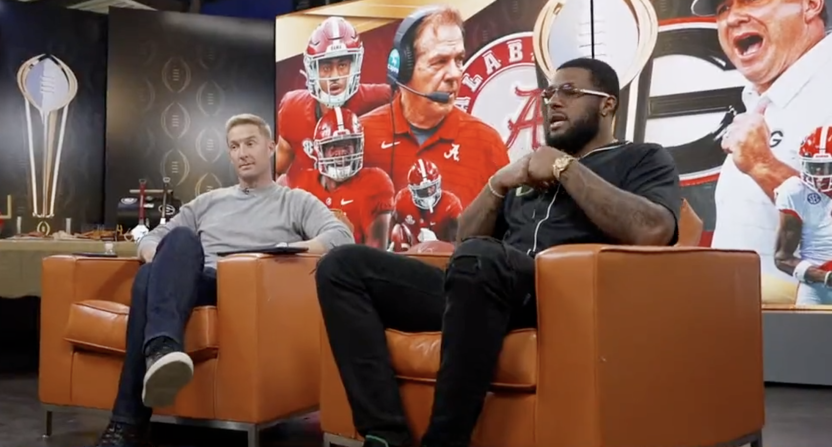 Kayvon Thibodeaux made headlines in 2018 when, as a five-star recruit and USA Today‘s High School Football Defensive Player of the Year, he chose to play for the Oregon Ducks over the Alabama Crimson Tide. While his college career is now over and he’s got his sights set on the NFL, he left Alabama with one more parting shot before he’s done.

Thibodeaux, a unanimous All-American selection and first-team All-Pac 12 defensive end this season, sat down with Fox Sports’ Joel Klatt to talk about his college career and plans for the future. When asked about why he chose Oregon over Alabama, Thibodeaux went all-in on the perception of an Alabama education, saying “I don’t know if my degree would mean anything.”

More than an athlete ?@KayvonT offers perspective as to why choosing @OregonFootball was about more than just what happens on the football field ??

“What people don’t realize is that football is an American sport. So, no matter how great Alabama is, you only play football in America, Canada, and a couple other places. But a brand like Nike? I mean, for me it was like, what brand associations do I want to be tied to? For me, I already hate the stigmatism of football players being dumb jocks. Do you know the stigmatism of Alabama education? It ain’t the West Coast. It ain’t Harvard…I don’t know if my degree would mean anything.”

“No, I hear you,” Klatt responded on two occasions as Thibodeaux spoke.

Kayvon Thibodeaux saying “stigmatism” when he means “stigma” while saying he hates stereotypes, while stereotyping Alabama… after a whole year of Oregon fans making fun of Jimmy Lake for saying “academically prowess” makes this one of the greatest quotes in the history of sports pic.twitter.com/kgPillxgsL

While plenty of people are taking Thibodeaux to task over the use of “stigmatism” when he meant “stigma” in a rant about how he didn’t want a bad education from another institution, Klatt received his fair share of flack for not pushing back on Thibodeaux’s assessment of the university’s educational bona fides.

For what it’s worth, while Oregon ranks No. 99 amongst national universities in the latest U.S. World News & Report rankings, the University of Alabama comes in at No. 148, which is lower but not unreasonably so. If anything, the Oregon star is likely conflating the state of Alabama’s public school and educational reputation with the university’s. But we digress.

Klatt clearly heard the feedback about the comments and his lack of clarification, taking to Twitter a day later to apologize for it, saying that he “should’ve pushed back.”

No excuses…should’ve pushed back! Fact is a University of Alabama education is very good

Meanwhile, Thibodeaux appears to have responded to critics as well, by trying to brush them off, which will probably go over about as well as you’d expect.

Don’t lose sleep trying to correct someone else…find something more important to do?

Ultimately, it seems like everyone got what they wanted. Alabama did indeed with a national title during the time Thibodeaux would have been there. Meanwhile, he got to experience the close proximity of Nike at Oregon. That said, Thibodeaux will probably be hearing about this one from Alabama fans for a while, especially if he has any struggles in the NFL.

For what it’s worth, it’s not even the worst thing Thibodeaux has ever said while live on national television.