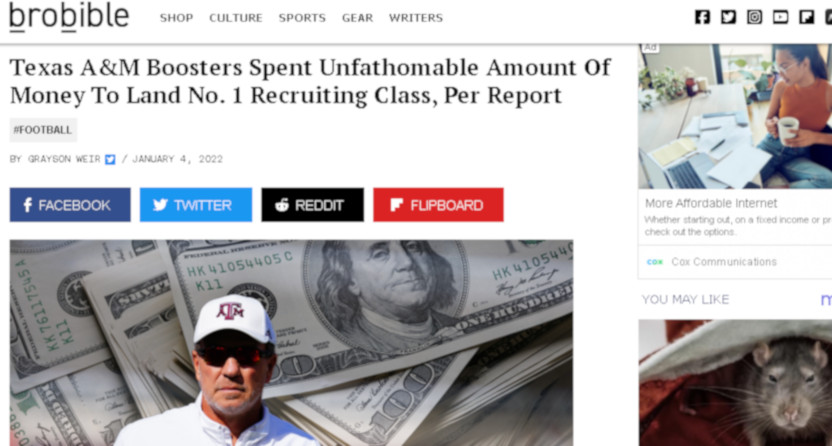 One of the most remarkable comments from a head coach about a media outlet in some time came from Texas A&M coach Jimbo Fisher Wednesday. During a National Signing Day interview on CBSSN, after Texas A&M landed a class considered to be the best of any school ever by the 247 Sports composite index, Fisher blasted those who have made claims about A&M boosters offering name, image, and likeness inducements to recruits. And he particularly singled out a Jan. 4 BroBible article from Grayson Weir (titled “Texas A&M Boosters Spent Unfathomable Amount Of Money To Land No. 1 Recruiting Class, Per Report,” and featuring the remarkably subtle top image seen above of Fisher photoshopped in front of a pile of money), and incorrectly claimed it was written by “SlicedBread,” which was actually the message board alias of someone quoted in the piece:

“Things were taken off a message board, BroBible, by a guy named sliced bread, whoever the heck that is” maybe the greatest quote ever pic.twitter.com/Bvud3tNhRl

Here’s a transcript of Fisher’s comments there, via TexAgs:

“There is no $30 million fund. This is garbage. It pisses me off. It comes from a site called ‘BroBible,’ and it comes from a guy called ‘SlicedBread.’ It’s unbelievable to me. It’s insulting to me that they think this is why these players chose to come here. To have coaches say it, clown acts. Irresponsible as hell, multiple coaches in our league. That’s the ironic part. It’s a joke. It does piss me off. The vice president of Notre Dame. I wouldn’t be really proud to hire that guy. We worry about the kids and social media, what about grownups? I know the history, the tradition, and I know things. You don’t want to go down that avenue. It’s funny when Nick Saban said his quarterback got an $800k deal. It’s funny when they do it. The hypocrisy is a joke. It’s insulting to our staff and our school. There’s no better place to play ball. It’s irresponsible. It’s funny when they do it. The ball game is changing, and it’s not because of NIL.”

And here are some excerpts from the BroBible article Weir built around that post:

According to a message board user who goes by SlicedBread, Aggie boosters spent between $25 and $30 million to sure-up [sic] the nation’s top class. He reported that the effort was targeted and coordinated.

…Like what is reportedly being done amongst the boosters at A&M — and everywhere across the country — money can be distributed through deals for NIL. A recruit cannot be offered a lucrative deal in return for a commitment directly. BUT, the idea can be floated and if/when a prospect enrolls, it can be signed and paid out.

…So, when the math is all said and done, for Texas A&M to spend that reported number, is not hard to believe. The price of oil is up right now, there is money in the state of Texas. Good for the Aggies boosters for having that kind of dough and using it effectively.

Here is how it reportedly plays out in College Station:

A recruit is targeted for a specific recruiting class.
A “point donor” then heads the recruiting effort.
The “point donor” gathers other donors around him.
Those donors create an LLC.
The LLC sponsors the targeted recruit and pays out deals for NIL if/when he enrolls.
That recruit, upon arrival on campus, receives money from the LLC.
In turn, the recruit promotes the LLC and its “cause,” whether that be a charity or a business.

While Weir writes in that article “IT IS PERFECTLY LEGAL” and “Texas A&M is doing nothing wrong, or even involved,” these kinds of claims are still problematic for a school. A key distinction drawn with NIL rules so far is that a NIL deal cannot be offered to specific players as an enticement to go to a specific school; those deals are supposed to be made with players after they have signed with the school. (There are some apparent exceptions to this so far that have not yet been targeted by NCAA enforcement when it comes to sponsorship of whole teams or whole position groups, but even there, there’s maybe plausible deniability of “We’re offering it this year to the current players, and we’re not promising recruits it will continue, even though it probably will.”)

And yes, it’s certainly plausible that there are backchannel conversations going on between boosters and recruits. The idea of paying recruits to go to a certain university has been discussed throughout most of the history of college football, and has been confirmed to be happening in some cases. (Steven Godfrey’s 2014 “Meet The Bag Man” SB Nation piece remains a good read on this.) But actually suggesting that impermissible activity is happening at a particular school requires a whole lot of dogged and detailed reporting. And it creates a whole lot of problems if those suggestions are made without sufficient factual backing.

An interesting media case in point there is Charles Robinson’s 2011 Miami investigation at Yahoo, widely praised for the specific and detailed allegations it made (and although it led to only limited sanctions, much of that was on the NCAA’s own investigation), versus George Dohrmann and Thayer Evans’ 2013 investigation of Oklahoma State at Sports Illustrated, which saw incredible pushback from the cited sources and from other media outlets and led to only very minimal NCAA punishment. There’s still plenty of debate over just what happened at Oklahoma State and just how justified SI’s series was, but it’s notable that it was going on a whole lot more than “one message board post from an anonymous user the article author doesn’t even claim to know,” and it still drew tremendous flak.

And yes, absolutely, no one is confusing that BroBible piece with an actual investigation. But it’s still sort of remarkable that it just takes this poster’s claims at face value and provides no further supporting evidence for them. Also, suggesting that an unsupported post on a message board about another school is a “report” is the biggest stretching of the word “report” we’ve ever seen. And while it is somewhat annoying that Fisher conflated someone quoted in the article with the author of the article, even that isn’t as much of a problem in this case as it’s been in other cases, as Weir thoroughly and uncritically presents the unsupported “SlicedBread” thesis as something he agrees with. This isn’t “SlicedBread” saying one thing and Weir saying another thing in a post commenting on it; it’s Weir taking the thread of SlicedBread’s post and sewing a whole sweater around it.

Of course, it is not out of the question that “SlicedBread” is right. We’ve seen several cases where anonymous message board posters do actually have a correct scoop, including noted MLB insiders KatyPerrysBootyHole and wetbutt23. We’ve also seen this on Twitter, from noted NHL insider FredTheDog04 to actual named fans like Katie Camlin and Brian Chandler. But levying improper NIL allegations at a particular program is a serious matter, and one that, in a non-message board venue, probably deserves sourcing beyond a post on a message board about a different school entirely. So it’s hard not to see Fisher’s point here, even if it wasn’t “SlicedBread” who wrote the story in question.

Update: For his part, Weir responded to Fisher’s comments with a “Jimbo Fisher Got VERY Defensive While Denying That Texas A&M Spent A Small Fortune On Recruiting” BroBible article. And he also updated the initial piece with “EDITORIAL NOTE: I identified the source Sliced Bread as someone with knowledge of recruiting in this specific region.” And in a conversation with AA about his initial piece, Weir said ‘It does not say that recruits are made aware of a deal, nor does it imply that there are discussions of a specific deal.'”