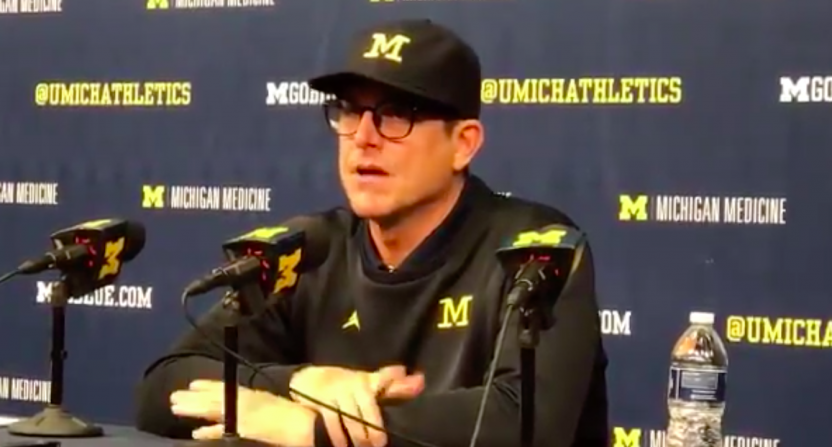 While the Michigan Wolverines made it a game for a little bit, the Ohio State Buckeyes ended up winning easily in Saturday’s rivalry showdown, 56-27. That marks the eighth-consecutive year that the Buckeyes have won the game, but more importantly, it means Michigan head coach Jim Harbaugh is now 0-5 in the rivalry game.

Whether or not Harbaugh could find a way to finally beat the Buckeyes has been a discussion point since, well, last year’s loss. It’s the albatross that will always hang around his neck regardless of whatever else he accomplishes as head coach there. So, knowing that he was unable to get a victory once more as the Buckeyes march into the Big Ten Championship Game with a College Football Playoff berth on the line, you could imagine that Harbaugh was in no mood to get into it after the game.

Still, a head coach has to face the media at the post-game presser and Harbaugh did just that. And while he didn’t blow up or call media members names like some of his contemporaries, he made it clear that he didn’t want to have any kind of discussion about the perceived gap between the two programs.

During the presser, Harbaugh was asked about that difference and whether or not it was a talent gap, a scheme gap, or a coaching gap. That last option seemed to tick him off and he responded by saying, “I’ll answer your questions, not your insults.”

The reporter followed that up by clarifying he did not mean it as an insult but wanted to know how Harbaugh felt about the ways Ohio State is just clearly a better program right now. Harbaugh wouldn’t budge and simply said, “They played really good, they played good.” He eventually ended the whole exchange by saying “they played better today” and moving on.

Harbaugh may not like the question but there’s no dodging that Michigan seems unable to close that aforementioned gap on Ohio State. This is now the fourth time under Harbaugh that the Wolverines have lost to OSU by double digits. And while Michigan has had plenty of success during his tenure, it’s not the kind of success boosters and fans were hoping for and it’s certainly nowhere near where the Buckeyes have been (and still are).

The hard questions are only going to keep coming for Harbaugh and they won’t stop until, well, he closes that gap.