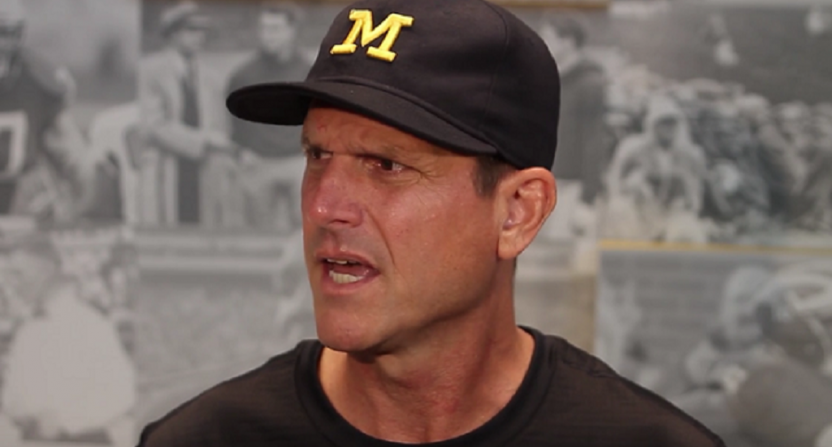 In 2015, Michigan Wolverines head coach Jim Harbaugh claimed he had no idea who Paul Finebaum is.

Now, it appears that he’s aware of the radio host/SEC Network talking head, but thinks Finebaum’s name is “Pete” (or is just calling him that intentionally out of disrespect, of course).

Harbaugh sent out a Tweet on Thursday night about “Pete” and his “#AlternativeFacts”:

Finebaum has been critical of the Michigan football program and its fanbase for a long while. He called Michigan fans a “whiny and sniveling bunch” in September, and in October, said to them, “When you win championship, call me back.” He continued to rant about them in December, specifically regarding their arrogance (in his opinion).

But we can assume it’s what Finebaum said on Wednesday’s edition of Outside The Lines that got Harbaugh to fire off that tweet.

Finebaum went off about Harbaugh’s recruiting tactics after Michigan hired Michael Johnson Sr. as an offensive analyst on the football staff. Johnson Sr. is the father of the top-ranked dual-threat quarterback of the 2019 recruiting class, so this led Finebaum to call the hire “cheating”.

Here’s what Finebaum had to say on Outside The Lines:

And here are the comments transcribed by MLive:

“He’s an evil genius. I think he’s one of the smartest people I’ve run into in a long time. Most of what he’s done is just that: Genius … but this is wrong,” Finebaum says. “It may not be illegal by NCAA standards and bylaws as of this moment, but to me, it’s cheating. It’s blatantly disregarding the spirit of the NCAA rule. We all know why he’s doing it. This is the same person who, last year, accused Nick Saban of cheating and Hugh Freeze of cheating.

“I know he won’t be penalized for it, but he’s cheating. Why don’t we just face up to it? There’s no other reason why he would hire this man. It’s been done in the past. But it’s still wrong. I don’t know why the media celebrates Jim Harbaugh and doing things that are, in my mind, unethical.”

Harbaugh’s intentions with the hire are certainly fair to question, but it’s not like Johnson Sr. isn’t qualified, as MLive explains:

Johnson — whose job has not yet been defined at Michigan — spent a decade as an NFL assistant, including a run as Harbaugh’s quarterbacks with during a year with the San Diego Chargers.

He’s also been an offensive coordinator with the San Francisco 49ers (the year before Harbaugh took the job in 2011) and with the UCLA Bruins. He also served as UCLA’s interim head coach for one game.

He had been the head coach at The King’s Academy in Sunnyvale, California since 2014

There is sure to be more to come from this feud, and expect “Pete” to address it more on his radio show.