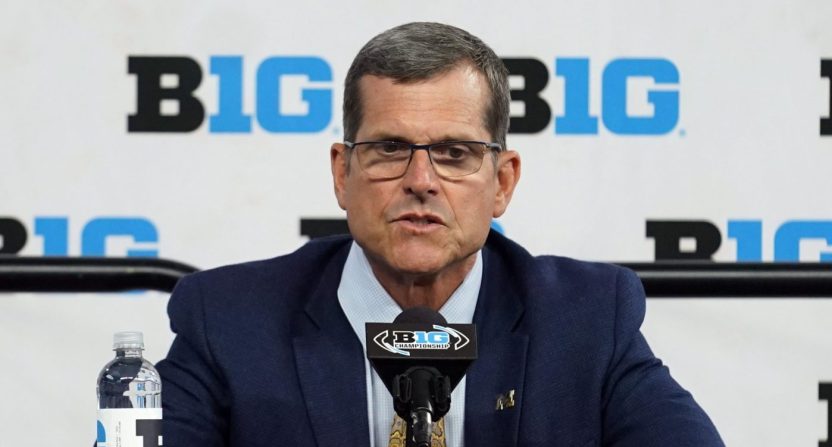 While many have wondered how Jim Harbaugh’s vocal anti-abortion stance might affect him on the recruiting trail, the Michigan Wolverines’ head coach recently took an unrelated position that is sure to have a positive impact.

Speaking to reporters at Big Ten Media Days, Harbaugh endorsed college players getting paid for Name, Image and Likeness rights. And he took it a step further by suggesting league-provided revenue sharing for players.

“You know me, I’ve always been for NIL,” Harbaugh said. “I believe players should have a share in the revenues, and I think that’s something that’s really possible at Michigan. I think that’s where we’re headed.”

Harbaugh expounded on the idea of league-provided revenue sharing by citing the Big Ten’s next media rights deal, which is in negotiations (the largest portion will remain with Fox, but who else gets involved is still up in the air). The Big Ten’s current media deal is set to expire in 2023 and is reportedly worth $440 million annually. Many anticipate the conference’s next deal to exceed $1 billion per year, and according to Harbaugh, the players should get a cut.

“The Big Ten even, they use their name, image and likeness on the TV broadcasts,” Harbaugh continued. “They’re the ones signing the mega TV deals, and a new one is coming in 2024. Why can’t that be a NIL deal right from the Big Ten? That’s who is negotiating the TV deals and that’s where the big money is.”

The stance by Harbaugh can be viewed as somewhat hypocritical, considering he’s for the players getting some sort of financial compensation, but doesn’t want Michigan to pay them directly.

Michigan football can certainly benefit from a league-provided revenue sharing system considering their popularity and ability to generate TV viewership. It remains to be seen how such a system could be implemented, or if anyone at conference headquarters has any interest in this. But Harbaugh appears eager to lobby for his players getting paid, so long as someone else is covering the cost.