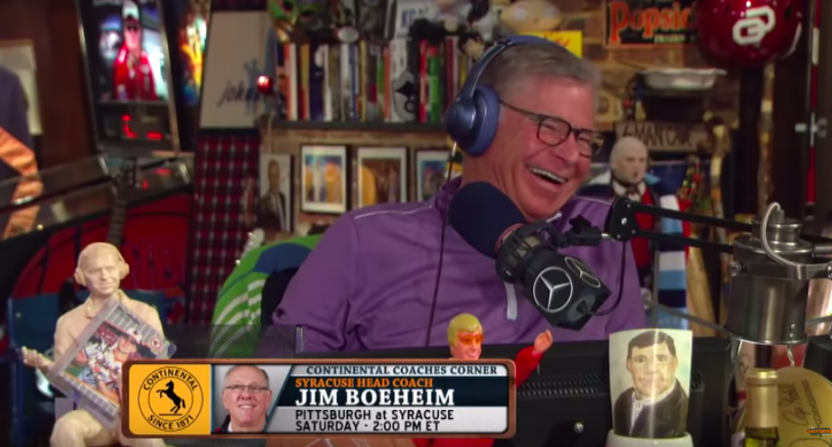 At some point in every college basketball season, Jim Boeheim shows up in your life whether you asked for it or not. Every time you decided to write off the Syracuse Orange, here they come with a crazy win or an absurd NCAA Tournament run.

Such was the case on Monday when the school’s somewhat-disappointing season was salvaged thanks to a shocking overtime victory in Durham over the No. 1 Duke Blue Devils. Just like that, Syracuse and curmudgeonly head coach Jim Boeheim are back in the spotlight and that means Boeheim was going to get behind a microphone and say something controversial, deeply sarcastic, or just plain mean (perhaps all three at once).

As often happens, Boeheim’s latest bon mot comes in the form of praise. After the game, the Hall of Fame coach had high praise for Zion Williamson, the Duke phenom who scored 35 points and grabbed 10 rebounds in the losing effort. In fact, Boeheim went on to compare Williamson to another Hall-0f-Famer, though he made sure to get a zinger in there.

"He’s like Charles Barkley was, except he shoots better … and he’s not as fat.” @Cuse_MBB HC Jim Boeheim had some thoughts on Zion Williamson ? pic.twitter.com/PkfWnXIg31

“He’s a physical specimen…He’s like Charles Barkley was except he shoots better than Charles did. And he’s not as fat.”

That’s really saying something consider Barkley was listed at 6’6″ and 252 pounds when he played at Auburn while Williamson is listed at 6’7″ and 285 pounds.

Boeheim added, “he’ll have something for me there,” alluding to the fact that he’s going to have to eventually hear about it from Barkley about that little add-on at the end.

Turns out, he didn’t have to wait very long. Boeheim appeared on The Dan Patrick Show (available via Podcast One, Premiere Radio Networks, and DirecTV channel 239) on Tuesday and while most of the talk was about the big upset and what Boeheim thinks the rest of the season might look like for his Orange, Patrick made sure to bring up Jim’s comments about Sir Charles the night before.

“Just to recap what you said last night after the win…’He’s like Charles Barkley was except he shoots better than Charles did. And he’s not as fat.'”

“Charles is gonna kill me,” Boeheim said, as Patrick signaled to his producer who then let him know that Barkley himself was already on hold waiting to join the conversation.

What follows is a delightful chat between the two that combined the ribbing of old friends with some actual analysis of Zion Williamson as they attempt to figure out exactly how big he is and whether or not he really might be a “non-fat” Charles Barkley. Boeheim also manages to throw his wife under the bus, blaming her for the initial comparison (Juli Boeheim, always a good sport, apologizes in the background).

Cooler heads and large posteriors prevailed. Boeheim finished by saying that he’s “glad there’s a one-and-done rule right now” as he’ll only have to worry about seeing Zion again one or possibly two more times this season. And this time he’ll have to deal with a Zion Williamson with revenge on his mind. As if he needed to add anything else to be intimidating.

The Dan Patrick Show is available on DirecTV channel 239.