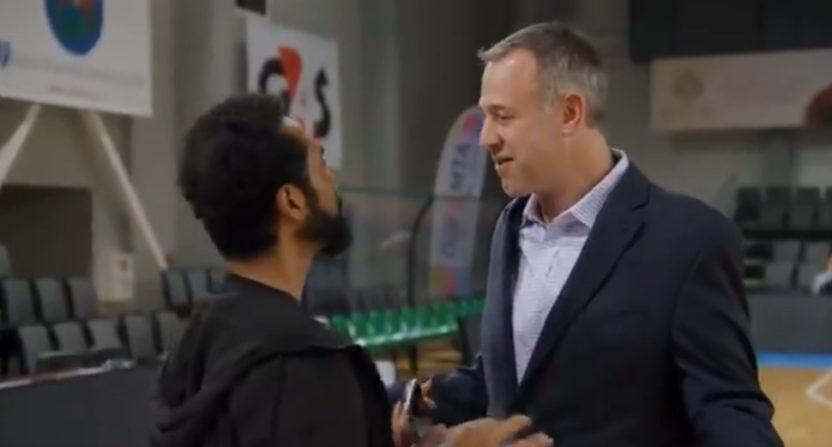 It sounds like ESPN is losing another college basketball reporter, this time to Stadium. Ryan Glasspiegel of The Big Lead reported Tuesday that Jeff Goodman appears set to leave the Worldwide Leader for a multi-year deal with Stadium, which will include both written and video content:

Jeff Goodman is leaving ESPN and joining the upstart Stadium, The Big Lead has learned from a person with direct knowledge of the news. Unauthorized to speak publicly on the matter, the person requested anonymity. Goodman and an ESPN spokesperson declined to comment.

Goodman has signed a multi-year deal with Stadium, which started as a streaming platform and is making a big financial commitment toward an editorial push.

…At Stadium, Goodman will have a variety of roles: He will write features, break news, analyze and opine, and do sit-down interviews pertaining to both college basketball and the NBA. Further, he will appear on their college basketball broadcasts; Stadium has rights deals with Mountain West, the West Coast Conference, Conference USA, and Atlantic 10. Last year, they partnered with Facebook to air 47 games.

Goodman joined ESPN in 2013 after time at CBS and Fox. He broke plenty of major stories while there, from Kevin Ollie being fired for cause (with Jeff Borzello) to Pat Kelsey changing his mind on going to UMass to NBA teams’ bizarre combine interviews. And the combine element is notable, as Goodman was regularly part of ESPN’s combine and draft coverage. But the network overhauled their combine coverage this year to emphasize Adrian Wojnarowski and many who came over from Yahoo with him, replacing the likes of Goodman and Fran Fraschilla. And it sounds like this year’s draft coverage may be similarly modified.

Goodman also produced plenty of high-profile coverage of the Ball family, from breaking the news of the arrest of LiAngelo Ball and other UCLA players in China to reporting on the Balls heading to Lithuania to their team’s Big Baller Brand Challenge Games plans to the piece heard around the world on LaVar’s thoughts on Lakers’ coach Luke Walton, which produced massive backlash and even threatened boycotts from NBA coaches. Much of that backlash from coaches was ridiculous, but it had a lot of people yelling at Goodman. And he took further fire from the other side not long after, after an episode of Ball in the Family tried to “expose” Goodman and showed LaVar cutting him off. Of course, that sequence really looked bad for LaVar, not Goodman, but Goodman did take some internet flak from Ball family fans afterwards.

As Glasspiegel notes, lessened opportunities for Goodman at ESPN may be part of what’s at play here. He wasn’t regularly in the college basketball studio last year, and while he made plenty of on-air appearances on SportsCenter, there are now four less hours of that show on the main ESPN network these days thanks to Get Up and High Noon, and the separate evening editions on ESPNEWS were cancelled last fall. There isn’t much need for intense Ball family coverage these days, and Goodman probably wouldn’t be the one to provide it in any case after LaVar got mad at him. With him being moved off combine and presumably draft coverage as well, that adds to the mix, and maybe made it more compelling for him to head over to Stadium.

And it sounds like Goodman will have plenty to do there. Stadium is getting more into sit-down interviews and shoulder programming, such as Baseball Stories (with fellow ex-ESPNer Jayson Stark), and it sounds like they’re expanding into written content as well, bringing in the likes of Goodman and fellow ex-ESPNer Brett McMurphy. They have significant college basketball rights, so there are lots of broadcasts for him to appear on, and it’s significant that they’ll have Goodman cover both college basketball and the NBA, maybe an expanded opportunity relative to what he was given at ESPN. We’ll see how this works out for him, but it’s certainly a nice addition for Stadium, and yet another college basketball name leaving ESPN.