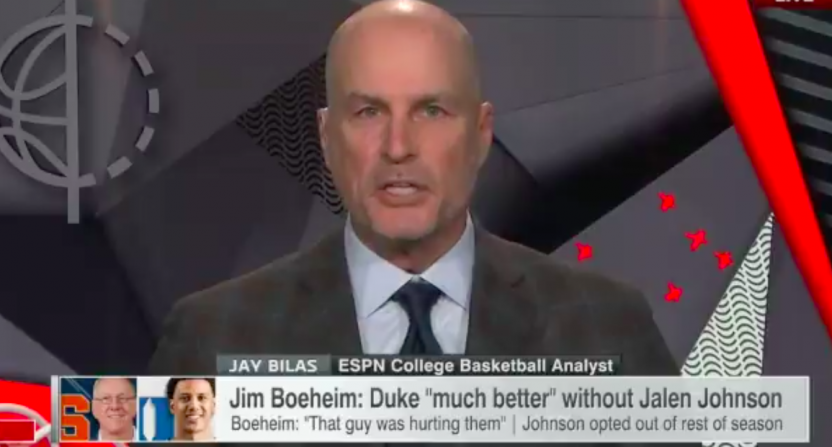 Jim Boeheim is Jim Boeheim and from time to time he does very Jim Boeheim things. One of those things that the longtime Syracuse men’s basketball head coach loves to do is give his opinion on things that perhaps he would have been better off keeping to himself. Over the years, Boeheim’s penchant for providing hot takes has turned an entire city against him, led to plenty of press conference drama, and even put himself in legal trouble.

Boeheim dipped his toe back into the drama pool this past week when he appeared on his weekly radio show in Syracuse. He was in rare form, taking on all sorts of old-man grievances, including the Ivy League’s decision not to play sports (They didn’t think at all about these kids”), whether the NCAA should consider shortening the tournament for safety (I don’t think anybody will have a problem with catching the disease once we get there”), and whether or not Syracuse should have to cancel in-person classes if it reaches 100 positive COVID cases (“Anybody can see that makes no sense”). Then he was asked about the recent decision by Duke freshman Jalen Johnson to opt-out of the rest of the season and start prepping for NBA Draft.

“That guy was hurting them so they actually are much better now without him. He was just doing some things and keeping other people from playing that are good. They’ve had two monster wins since he’s opted out and they’re playing good basketball. They’ve got very good talent. You knew they were going to play out of this thing and now they’re playing well. Every game we play is a very difficult game, a great challenge and we look forward to it.”

Not a great thing to say about an unpaid kid playing for someone else’s program! It’s very much in line with how Boeheim has always discussed players staying in school, but that doesn’t mean he should be offering up such harsh advice, especially when many of the “facts” he presents are subjective.

this is: “lame as hell” https://t.co/zvuyi8nlvw

Naturally, Boeheim received plenty of criticism for the comments and, in particular, ESPN’s Jay Bilas took the coach to task in multiple appearances this week.

“The idea that somehow they’re better without Jalen Johnson is patently false,” Bilas said, who used the example of Boeheim’s previous comments about James Akinjo to show how the head coach has a penchant for doing this kind of thing.

Jalen Johnson does not have a “camp,” “people in his ear,” or a “posse.” He has a family. He has a mother and father helping him, with his best interests in mind, making decisions. We can differ with the decision, but the undertones of the criticism of Johnson are concerning. pic.twitter.com/icKqC9u0Cp

More on Jalen Johnson and the manner in which his decision has been presented and commented upon. We can, and should, do better. pic.twitter.com/tWOVFJRx2z

Bilas’s critique of Boeheim is very fair overall, but in multiple appearances, there does seem to be a bit of a mixed message in terms of what the coach was saying.

It would be pretty easy to read those tweets and listen to Bilas in both segments and come away thinking that Boeheim referred to Johnson’s family as a “camp” or “posse” when those quotes appear nowhere in the coach’s comments. Bilas is asked to respond specifically to Boeheim’s comments but also uses the discussion to combine what Boeheim said with what others may have said or implied. That gets a little lost in translation and sets up Boeheim to have used some very coded language that, to be fair, he did not.

Jay and Jim can disagree about whether Duke is better without Jalen Johnson. That’s the Ewing Theory, right?
But we need to do a better job of making it clear that Boeheim never used the coded language of posse and camp. https://t.co/yyXT81vhUw

Is this ultimately a big deal? Maybe, maybe not. If someone watching the segments came away thinking Boeheim is an idiot for his comments on Johnson, that’s fair. Boeheim almost certainly shouldn’t have said anything and now he should fairly pay the public price for having done so.

But if someone watching the segments came away thinking Boeheim was using coded language with racial undertones, that simply didn’t happen. And it’s worth being very clear about that because that’s a whole other discussion.