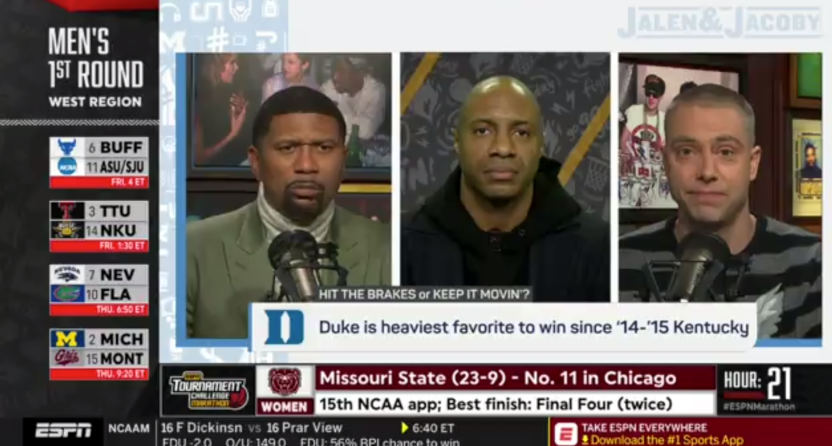 It’s not just Stephen A. Smith making high–profile missteps on ESPN. On Jalen and Jacoby Tuesday, Jalen Rose asked if the 2014-15 Kentucky Wildcats men’s basketball team was the one with John Wall and DeMarcus “Boogie” Cousins, and both David Jacoby and Jay Williams agreed it was.

The problem? Those players only played for Kentucky during the 2009-10 season. Here’s the clip of that:

Rose’s “That was John Wall and Boogie, right?” drew “I think so” and “Yes, sir” responses from Jacoby and Williams respectively. And yes, the Wildcats weren’t the point of the discussion here (the topic at hand was this year’s Duke team being the heaviest favorite since Kentucky in 2015), but missing when prominent players Wall and Cousins played at Kentucky by five years feels pretty significant. Mistakes happen, but this is a notable one. (And it’s funny to see Jacoby and Williams confirm Rose’s very-wrong thought.)

And with Smith, there’s always the defense that he doesn’t really care about the NFL (although that sure doesn’t stop him from incorrectly shouting about it), but both Rose and Williams are primarily basketball analysts who should have a decent idea of how long guys like Wall and Cousins have been in the NBA. Or so you’d think, at least. At any rate, this led to some funny dunks on them on Twitter:

Kemba Walker was magical in that 2004 run.

I’ll never forget Sean May in the 2009 tournament. Dominant.

Apparently, this wasn’t the only questionable thing Williams said today either.

Jalen Rose just compared Ja Morant to Lillard. Really good comp. Hadn't thought of that … Then Jay Williams called Bol Bol "a big guard." Which, at 7-3, might be a stretch.

But hey, Rose has long been an admirer of Wall.

That’s pretty good of Rose to “tell fools about Wall” two years before Wall supposedly played for Kentucky. Very prescient of him.