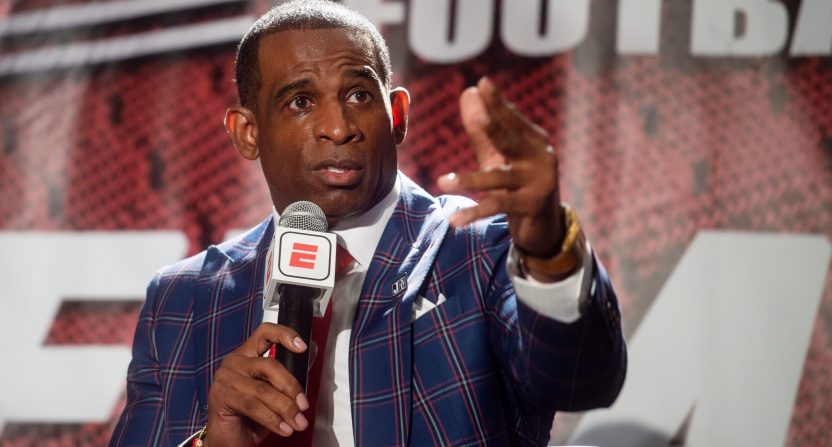 On Tuesday, the main national news out of SWAC football media day was about Jackson State head coach Deion Sanders walking out of a press conference after a reporter referred to him by his first name. Sanders, who was offended by not getting the perceived same treatment as a coach like Nick Saban (which was incorrect), made sure that the only thing anyone would be focused on for the rest of the day was this transgression.

Turns out, that might have been by design. Here’s what Awful Announcing’s Andrew Bucholtz said in our initial write-up of the drama.

Late Tuesday, the Clarion Ledger, the same paper that the reporter in question works for, noted that reporter Rashad Milligan was barred from covering anyone associated with the Jackson State football team following a story about a domestic violence charge against the highest-ranked high school recruit in JSU history. Specifically, the paper had been told that Sanders himself didn’t want Milligan interviewing JSU players or coaches.

“A Clarion-Ledger reporter was punished for simply doing his job,” Clarion-Ledger Executive Editor Marlon A. Walker said. “The decision to interfere with a working journalist not only is disappointing but also intolerable. It runs counter to the Clarion Ledger’s unwavering mission to freely and fully inform readers throughout Mississippi. It is imperative to stand strong against any attempts to disrupt that effort.”

The offending article was about Quaydarius Davis, a four-star wide receiver (and former Kansas signee) from Dallas who had been charged with “assault causes bodily injury family violence” in March. Milligan reported that Davis was expected to plead guilty to the misdemeanor. Davis’ attorney later told the Clarion-Ledger that he was not planning to plead guilty, though Milligan had been unable to reach the lawyer prior to publishing.

A Jackson State spokesperson told the Clarion-Ledger that Milligan’s credentials were not taken away and that he had not been barred from covering the team in the future, though there didn’t seem to be much clarity about why he was unable to speak with anyone on Tuesday.

“Two Clarion Ledger reporters were credentialed for SWAC Media Days, those credentials were not taken away and the SWAC also said they were not taken away. I am not privy to any reporter being barred or banned. Rashad Milligan has not been barred from covering Jackson State. We have no further comment at this time.”

The article also noted that Milligan had been told by JSU athletics spokesperson Dennis Driscoll that publishing the Davis article could lead to him losing access. When he did publish the piece, JSU athletics director Ashley Robinson reportedly told Milligan that the article was inaccurate and that he should cover other schools at media day. When he showed up to report on JSU, Milligan was reportedly told by both Driscoll and Robinson that he would not be allowed to. When he tried to continue reporting, he was reportedly told by Driscoll that he would not be allowed to “because of the Davis story.” Milligan was then told that interviews for all press would not begin so long as he was present.

This is how all of this started, I really Pray for all of us because this was something so minimal that was hilarious to me that you allowed a FOOLISH media outlet and person to play on your Preconceived notions. I’m all about Peace,Love,Work,Commitment,Sacrifice & Forgiveness. pic.twitter.com/ZjZPMVJVfj

In what was already a day of bad looks for Deion Sanders and Jackson State, this makes the initial story seem rather inconsequential. Getting mad about a story involving one of your incoming recruits is understandable, but to deny a local beat reporter access to your program as punishment, when all they did was report facts, is just petty and inane. The Ledger is clearly going to back their reporter for doing their job and all of the headlines are going to be about the over-the-top reaction that the program had. That goes double given the over-the-top reaction that Sanders himself had during the press conference to hearing his first name.

When they hired Deion Sanders, Jackson State was certainly letting the world know it was ready for prime time. But now that they’ve got the attention, one wonders if they’re going to be able to handle the spotlight.