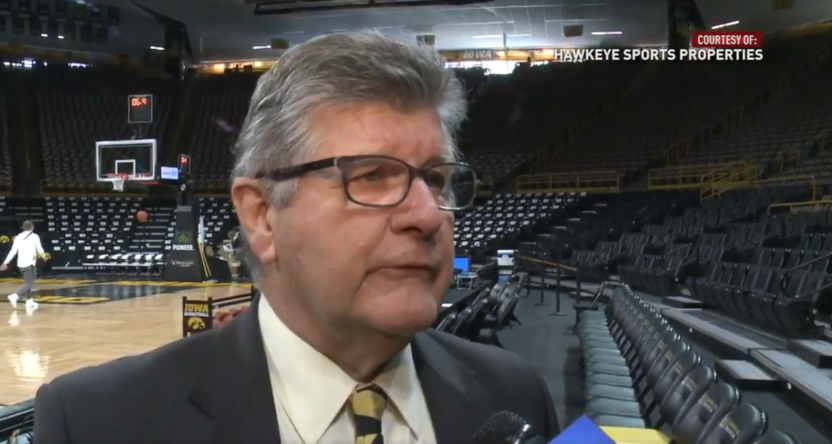 Back in November, Iowa Hawkeyes’ multimedia rights holder Learfield suspended long-time Hawkeyes’ radio announcer Gary Dolphin for two games after remarks of his criticizing the team’s recruiting and the play of some specific players (guard Maishe Dailey in particular) were picked up on a hot mic. That proved controversial, though, as one Iowa booster even launched a radio ad criticizing Dolphin’s suspension. Well, Dolphin’s now been suspended again, for the remainder of the season this time, and what’s at issue is what he said about Maryland player Bruno Fernando after Tuesday’s Hawkeyes-Terrapins game, comparing him to King Kong. Here’s audio of that via Chris Hassel (the former ESPN anchor who now works for CBS Sports HQ and Stadium):

Here’s the audio that got the Voice of the Hawkeyes, Gary Dolphin, suspended for the rest of the basketball season.

“Fernando was King Kong at the end of the game.”pic.twitter.com/C5Adruj3St

Here’s more on Dolphin’s suspension from Des Moines’ 1460 KNXO (the sports sister station of Iowa rightsholder 1040 WHO; both are owned by iHeartMedia)

Hawkeye Sports Properties, the multimedia rights manager for University of Iowa Athletics, today announced it has suspended play-by-play announcer Gary Dolphin indefinitely through the remaining basketball season. The decision follows an inappropriate comment made by Dolphin during Tuesday’s broadcast of the Iowa men’s basketball game against Maryland.

Gary Dolphin issued the following statement: “During the broadcast, I used a comparison when trying to describe a talented Maryland basketball player. In no way did I intend to offend or disparage the player. I take full responsibility for my inappropriate word choice and offer a sincere apology to him and anyone else who was offended. I wish the Iowa Hawkeye players, coaches and fans all the very best as they head into the final stretch of the season. I will use this as an opportunity to grow as a person and learn more about unconscious bias.”

For the remainder of the basketball season, Jim Albracht and Bobby Hansen will serve as the radio announcers for Iowa’s men’s basketball games.

Dolphin may not have meant anything related to race with his comments, but comparing an Angola-born basketball player to a gorilla-like monster is obviously going to take some flak, especially considering the long and troubled history around references comparing black people to primates (something that cost Roseanne Barr her TV job last year). And while Dolphin has a lot of supporters from all his years calling Iowa athletics (he’s in his 22nd year calling the Hawkeyes’ football and basketball games), and while many of them are insisting that this couldn’t possibly be racist, someone who’s been broadcasting this long probably should know better than to bring up primates. (But, he also should have known better than to say “jigaboo” in 2011.) To Dolphin’s credit, his statement does recognize that his remark was inappropriate, and his desire to learn more about unconscious bias is positive. But that doesn’t suggest that he didn’t deserve punishment here.

Whether the rest-of-the-season suspension is appropriate can be debated a bit more, and there’s no clear guideline for just what punishment is appropriate for racially-associated remarks. Those have sometimes led to suspensions and sometimes led to job losses, but other times, an apology alone has proven enough for the employer. And something noteworthy here is that Iowa athletics director Gary Barta is again not offering much comment; Barta was criticized the last time Dolphin was suspended for referencing “ongoing tensions” in a release and then declining all further comment, and the Hawkeyes have now put out a statement attributed to no one, with Barta again declining further comment. Here’s that statement:

The University of Iowa athletics department values diversity and is committed to creating a welcoming environment for all members of its campus community.”

How much longer will you put up with this from the Iowa athletics department? The decision not to address this ASAP makes more than one or two people look bad. It makes everyone Iowa look bad. Like they're hiding. I can't imagine you want that. https://t.co/V6OWe5Ft3V

If the University of Iowa thinks this is a big enough deal to suspend its announcer for the rest of the season and make this a national story — the AD needs to be available to comment. IMMEDIATELY https://t.co/XDsgtazNwd

"An Unnecessary Mess" is such a perfect summation of the Gary Barta era that I want to commission a statute of him just to give it that name. https://t.co/vqEnMlDzn8

In terms of the overall cultural and broadcasting landscape at the moment, it definitely seems reasonable to suspend Dolphin for these comments, and he should have known better than to make this reference. Whether a suspension for the remainder of the year is appropriate can be debated, but there’s no clear answer there. But it is disappointing to see Barta and the Iowa athletics department again doing everything they can to avoid really commenting on this or answering questions. Yes, this decision was supposedly made by their radio partner, but it’s unrealistic to think that the athletics department wasn’t involved or at least consulted. And they should be willing to defend their position here. Instead, we just get an unattributed statement and a “No further comment,” and that’s not the best way to handle anything, much less a sensitive broadcasting situation.