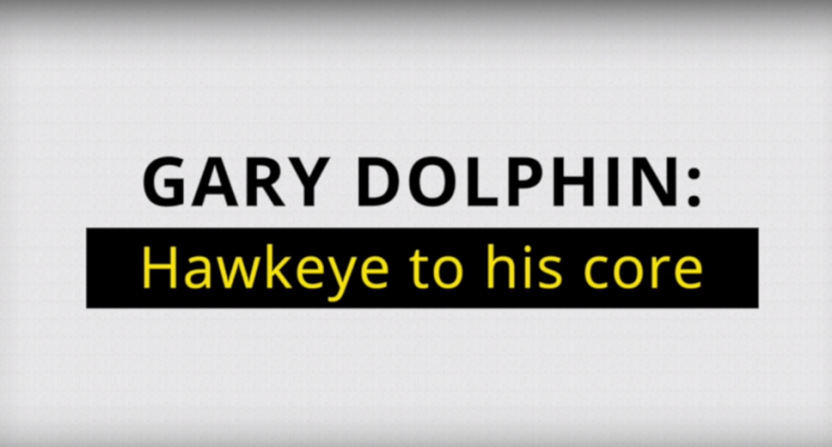 Somehow, the story of long-time Iowa radio broadcaster Gary Dolphin being suspended for two games after some of his criticisms of the team (and guard Maishe Dailey in particular) aired on a hot mic has gotten even stranger, with the company that carries Iowa games now asking affiliates not to run a commercial supporting Dolphin. That move was already taking criticism for athletic director Gary Barta’s unnecessary comment that the suspension was not just about those remarks, but also “ongoing tensions that have built up over the past couple of years,” and now it’s facing backlash from supporters of Dolphin.

One of those supporters of Dolphin is Nick Ryan. Ryan is the founder and CEO of public affairs firm Concordia Group, as well as Global Direct Mail & Marketing and the BeyondBall charity basketball program. He’s also a long-time Iowa Republican fundraiser. And now, he’s created an ad supporting Dolphin:

Thankful for all the Loyal Hawkeye Fans that support this commercial and our friend Gary Dolphin. https://t.co/90GUCCSV4F https://t.co/8DWj99oONH

Yep, that’s an ad with a bunch of clips of Dolphin calling Iowa football and basketball, and the message of “Gary Dolphin is a Hawkeye down to his core” and “It’s time for Gary Dolphin to get back behind the mic. It’s where he belongs. It’s where we need him.” (To generic swelling patriotic music that makes it even more clear that the guy who came up with this usually makes political ads, if the “Paid For By Loyal Hawkeye Fans Inc.” didn’t make that obvious enough.)

Oh, but the story doesn’t end there. As per Ryan J. Foley of The Associated Press, Learfield (the company that runs the Hawkeye Radio Network that carries Iowa games, and the company that actually employs Dolphin and was listed as giving him the suspension) is asking stations to decline the ads:

Learfield official, in email obtained by AP, telling stations to reject ads that support the star of its Hawkeye Radio Network. "I ask you, on behalf of Iowa athletics, Hawkeye Sports Properties, and Learfield, please do not" air the ad

Loyal Hawkeye Fans, Inc. is sponsoring the pro-Dolphin ad that will run on several stations during his two-game suspension.

…Hawkeye booster Nick Ryan says he’s behind the pro-Dolphin group and his family’s putting $12,000 into the campaign.

…A Learfield representative told a media buyer that it appreciates the “immense passion” for Dolphin but that it’s unable to consider the spot for broadcast.

The ad includes play-by-play audio that Learfield says the group doesn’t have permission to use. Ryan says some Learfield affiliates have also declined the ad.

Meanwhile, Dolphin himself restated his apology on Twitter Friday:

In the SEC, aggrieved fans buy billboard ads outside the conference headquarters. In the Big Ten, apparently, they buy radio ads in support of a suspended broadcaster. But, you know, this idea of buying ads on programs to criticize the announcing choices on those programs doesn’t seem all bad. We’ll eagerly await the formation of a PAC to run anti-Jason Witten ads on Monday Night Football…