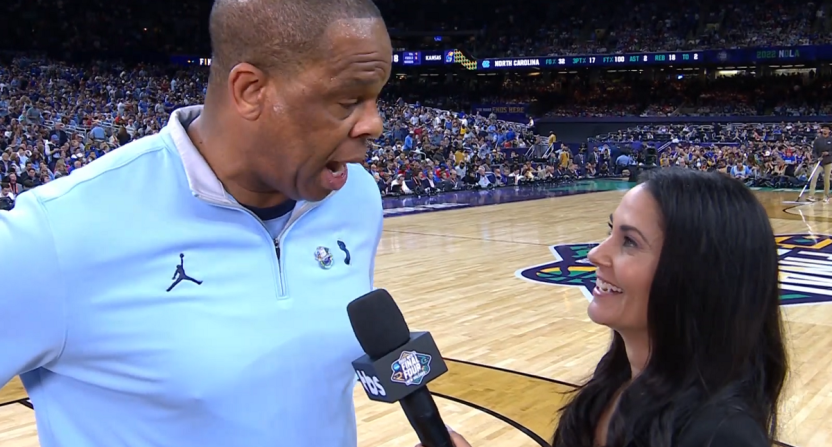 With Kansas off to a hot start, the Turner broadcast threw it to Tracy Wolfson for an in-game interview with North Carolina coach Hubert Davis.

Davis proceeded to fire up just about everyone, Carolina fans or not. Just watch this clip:

INCREDIBLE energy from Hubert Davis during this in-game interview with Tracy Wolfson. pic.twitter.com/XphPRKoDiE

At that point UNC had overcome a 7-0 deficit to start the game to take a 22-18 lead. After Davis gave that interview (and presumably took a lot of that energy back to his team’s huddle), the Tar Heels proceeded to finish the half on an 18-7 run, taking a 40-25 lead into the locker room.

It wasn’t just his own team Davis fired up, though.

I just ran through my own apartment wall after that Hubert Davis interview. And I’d do it again.

Heading into halftime, Davis was a bit more subdued, but still forceful while making his point that his team was very much not satisfied after beating Duke over the weekend:

It shouldn’t be a surprise that Davis is magnetic on camera or talking into a microphone. After all, he spent half a decade as one of ESPN’s top college basketball analysts, including work on the basketball version of College GameDay, which is certainly great training for working to the crowd.

If North Carolina hangs on, Davis will add a national championship to his coaching resume in his first year on the job. Watching that interview, you can see how he’s doing it; who wouldn’t want to play for a coach like that?