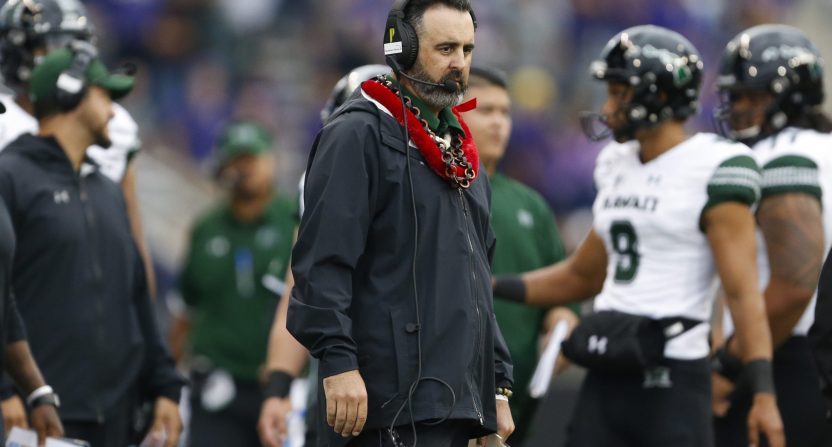 For the most part, many college football fans usually only hear about the Hawaii Rainbow Warriors football team when it’s late on Saturday night and they’re just kicking off their game. But some recent allegations are about to bring some unfortunate attention to the program and their head coach.

The Honolulu Star-Advertiser, the local paper of record, reported Friday on allegations from staff photographer Jamm Aquino, who says he was assaulted at the previous Hawaii football game. He claims that he was shoved by head coach Nick Rolovich and then pushed to the ground by another UH employee, causing harm to himself and his camera.

The paper also included a photo that was presumably from just before this moment with their story:

A Honolulu Star-Advertiser photographer said he was assaulted at last week’s University of Hawaii football game and suffered injuries after being shoved by the head coach and then knocked to the ground by a UH employee. Photo by @jammaquino https://t.co/CWpIzhZyO6 pic.twitter.com/jZqfBVWcX6

The alleged assault in question took place near the end of the Hawaii-San Diego State game last Saturday. Aquino had run onto the field near San Diego State coach Rocky Long in order to photograph the customary post-game handshake. That’s when he noticed that Rolovich was pointing and swearing directly at him. According to Aquino, Rolovich then made contact with the photographer before a separate UH employee pushed him to the ground, where he fell onto his camera. The fall left him with a concussion, bloody nose, a sore shoulder, and a split lower lip. The lens of the camera was also damaged.

An Associated Press photographer who was close to Aquino says they were also shoved, per the Star-Advertiser.

The incident may have been related to the fact that San Diego State had just missed a field goal that could have tied the game with two seconds left. Hawaii players and coaches started to rush the field in celebration, thinking the game was over. However, they were all made to head back to the sidelines in order to finish the game. Aquino had trailed the players running onto the field in order to get celebratory photos, and it was during that melee when the alleged assault occurred.

The field goal attempt from San Diego State is NO GOOD as time expires… Hawaii wins 14-11.

The Rainbow Warriors will represent the West Division in the Mountain West Conference Championship Game. pic.twitter.com/yur9cZnaog

Hawaii Athletics media guidelines state that members of the media are not allowed on the field, but the Star-Advertiser notes that it’s a rule that has rarely, if ever, been enforced. Photographers have taken to the field after a game is over in order to get celebratory footage without objection many times. In fact, you’d be hard-pressed to find a college football field anywhere in the country that wasn’t swarming with media members and photographers following any game, regardless of local guidelines.

“Our photographers are representing our readers and deserve to be treated as professionals,” said Frank Bridgewater, editor of the Star-Advertiser in the piece. “Swearing at and, worse, physically assaulting them, will not be tolerated. We will take whatever steps are needed to protect our photographers’ rights and to ensure that those who abuse them are called out.”

The school also released a statement that begins by scolding Aquino for being on the field against their guidelines before explaining that they are aware of the situation, that Rolovich was just trying to clear the field, and that he had apologized to the photographer in a phone call afterward.

“We are disappointed that a Star-Advertiser photographer violated sideline protocol by entering the field of play Saturday night.

“Coach Rolovich acknowledges that he came into physical contact with the photographer as he was attempting to clear the field to avoid being penalized because, with two seconds left on the clock, the game was not over.

“The university is addressing the situation with Coach Rolovich regarding the matter and will have no further comment.”

With the win, Hawaii clinched the Mountain West Conference West division and will play Boise State next week for the conference title. No word on whether or not Rolovich will face any internal or conference punishment over the incident. Also no word on whether not Aquino will take legal action against him or the school.