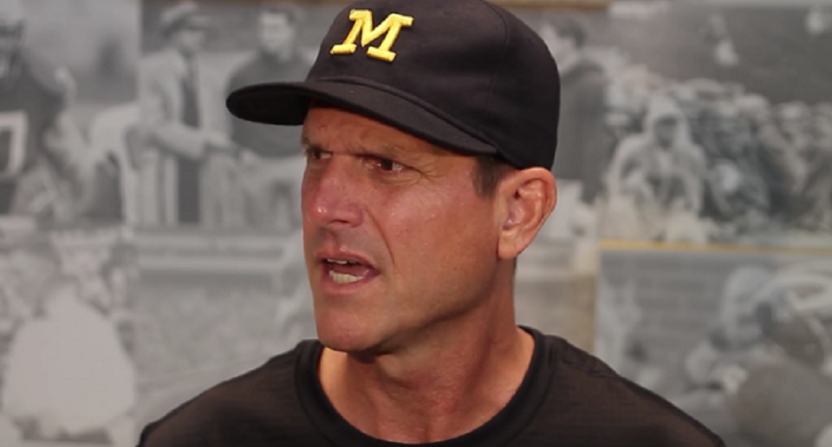 College football coaches are mostly a predictable lot. They are paranoid, restricting media access more and more as if Edward Snowden might leak their top secret off-tackle plays. They are contradictory, preaching toughness and aggression while punting way too much on fourth down instead of going for it. They are often bland, purposefully not saying anything interesting and instead choosing to speak in clichés and platitudes.

That’s the way it is in public. In private, apparently it’s different.

A CBS Sports story named Michigan’s Jim Harbaugh and Alabama’s Nick Saban as the most overrated coaches in the nation. According to the piece, written by Barrett Sallee, CBS Sports spoke to one-fifth of the 130 coaches in the FBS. In return for anonymity, the coaches spoke frankly about various topics including fellow coaches. That’s not unusual. It’s a trade media members often make to get critical information and break stories.

Sallee did his job – and it’s an interesting read. It’s the media’s job to get truth. You want to know what coaches really think? Wouldn’t it be great if you could have a polygraphist at every postgame news conference? How much fun would it be to inject them with sodium pentothal? Football needs more honesty.

Anonymity would be understandable to get expert analysis without fear of retribution. The coaching fraternity is very small and you never know who you might be working for in the future. Coaches are programmed from Day One to protect their own. Their knee-jerk reaction is to compliment and say a team is “well-coached” regardless if that’s true.

They don’t want to burn any bridges. I get it.

However, in this case, the honesty shown here makes me question their motives and prejudices. These unnamed coaches are cowards, no better than whiners on Twitter with egg avatars and pseudonyms. There is nothing easier than criticizing someone anonymously. That takes no guts. If these faceless bellyachers were critiquing specific strategies, recruiting or player development, that would be one thing.

But from the story, you don’t get nuance from these coaches. There are razor-thin details about what in particular makes Harbaugh and Saban overrated. Coaches should be the best equipped to give specific information – both anecdotal and analytical – about why those two in particular are overrated.

Instead, we get drivel. Sallee points out that coaches are annoyed with the attention Harbaugh has received, writing the following:

“Harbaugh hasn’t finished higher than third in his division during his first two seasons in Ann Arbor, Michigan, but antics like sleepovers with recruits, music videos public spats with Saban attract eyeballs like moths to a light.”

One coach had this to say about Saban:

“Nick’s got a lot of advantages. In [my conference], you could take five or six of us and get there a month before the season and win 12 games. There is a little f—ing machine underneath that stadium, and they grow them there.”

This is jealousy, pure and simple. Harbaugh and Saban are two of the highest-paid coaches in the nation, working for historically great programs. They have all the resources necessary to compete for national championships. As a result of these advantages, you’re going to get both praise and criticism. Criticism is fair. There are legitimate reasons to dislike both. Harbaugh is crazy and Saban is a dictator. You don’t have to look too far for multiple examples to support those assertions.

But for coaches to call both overrated seems far-fetched and incredibly shortsighted. It sounds like a slow news day topic from sports talk radio hell. (Coming up next! Should Pete Rose be in the Hall of Fame? Yes or no. We’ll take callers right now!)

Let’s examine Harbaugh first. Coaches who are jealous of the attention he gets have only themselves to blame. Harbaugh is one of the few who has something interesting to say. He’s comfortable in his own skin and does things a little different.

Harbaugh should be applauded, not demonized.

If Harbaugh didn’t get results, he’d be portrayed as a clown (see Rex Ryan). He’s 78-33 as a college coach. Harbaugh built Stanford into the Top 25 program that it is today under David Shaw. In the NFL, he revived the San Francisco 49ers, taking them to the Super Bowl. He lost a power struggle with the general manager, lost his job, and that team has been a joke since he left.

Well, what about Michigan? Harbaugh is only in his third season, so there is still room to grow. The Wolverines have finished in the Top 12 of the final Associated Press poll in each of his two seasons. That’s not shabby. Sure Michigan’s expectations are to contend for the national championship every year. And Michigan has yet to reach the four-team College Football playoff.

Pundits: Michigan wouldn't be preseason Top 10 if Jim Harbaugh wasn't the coach, so they're overrated

Me: But Jim Harbaugh is the coach pic.twitter.com/B6K0OVukoE

But let’s tap the brake on overrated. By any reasonable metric, Harbaugh is good at what he does.

As silly as the Harbaugh argument is, it pales in comparison to the ridiculousness of calling out Saban.

Look, you can call Saban many things: testy, a bully, a liar, just flat out obnoxious. The only thing you’re not allowed to call him is overrated. The man has won national championships at two different schools (LSU and Alabama). He has five national championships and is probably the greatest college football coach of all time.

Yes, Alabama provides him with a great platform to be successful. But so do other schools (Texas, USC, Florida, Florida State, Oklahoma, Ohio State, Michigan and Notre Dame, etc.). None of those programs have been as wildly successful as Alabama under Saban. Before Nickatator, Alabama had coaches like Mike Shula, Dennis Franchione and Mike DuBose. Those guys went a combined 67-54.

Saban is 106–18 since arriving in Tuscaloosa in 2007. He’ll continue to roll because he’s a great coach and it’s easier for him to win in college than it ever was in the NFL (15-17 with the Miami Dolphins).

In college, if Saban doesn’t like his quarterback, he can always recruit a better one. In the NFL, there are limits to talent acquisition (the draft, free agency and a salary cap).

You would think fellow coaches would be smart enough to figure all this out. We give them too much credit. Coaches are just like a lot of other people in your work place and profession. They can be petty, jealous and unreasonable.

Coaches, if you want to call someone overrated, that’s your business. Just don’t hide under anonymity.