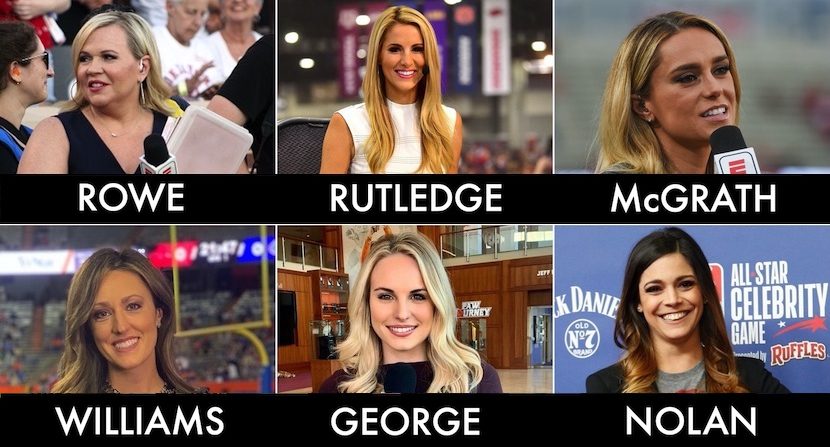 With Maria Taylor’s soap opera departure from ESPN now official, The Worldwide Leader is left scrambling to replace its female College GameDay co-host and ABC Saturday Night Football sideline reporter position for the second time in four years. This is not only an extremely visible and prominent role at the network, but also has been the launchpad for the careers of Erin Andrews, Sam Ponder, and now Taylor.

While the dust is still settling on Taylor’s exit, it’s almost certain that these positions will be filled by:

A. A woman, to balance out the show’s all-male Core Four of Rece Davis, Desmond Howard, Lee Corso, and Kirk Herbstreit.

B: An internal replacement, based on the position’s past turnover and ESPN’s current financial situation.

Here’s a look at the candidates and the odds of each replacing Taylor.

If this position was filled strictly on experience, Rowe would be a lock. She’s been at ESPN for over 20 years in a variety of roles and several years ago even worked while battling skin cancer. Rowe was also the sideline reporter for ESPN’s top afternoon college football broadcast team last season alongside Joe Tessitore and Greg McElroy. This should be Rowe’s job, but as ESPN showed by plucking Ponder to replace Andrews, seniority doesn’t always rule.

Rutledge reminds us so much of Erin Andrews. Both are University of Florida alums, a total natural on camera, and seem destined for much bigger things. So far, Rutledge has been a jack of all trades at ESPN, showing off her talents as a college football sideline reporter, co-host of Get Up!, and currently the host of NFL Live and the SEC Network version of GameDay, SEC Nation. Rutledge could either get both of Taylor’s old roles or ESPN could conceivably have someone else like Rowe handle the Saturday night sideline gig while Rutledge holds down the GameDay co-hosting duties.

The former Boston College cheerleading captain started her ESPN career as a production assistant and has worked herself all the way up to ESPN’s top Saturday night game broadcast, currently splitting its sideline reporter duties with Todd McShay. It’s not inconceivable that ESPN could leapfrog McGrath past Rowe and Rutledge if they believe McGrath is a star in the making.

Not to be confused with the actress of the same name, ESPN’s Allison Williams has now been at The Worldwide Leader for a full decade as a solid college football and basketball sideline reporter. Could being paired with Maria Taylor as the second sideline reporter for last season’s national title game between Ohio State and Alabama be a sign of a big promotion to come?

This is where things start to get fun with our first Wild Card. George has strong Allie LaForce vibes as a former college sports athlete and beauty pageant titleholder. Yes, she’s worked at the ESPN-operated ACC Network just two years as the current sideline reporter for the top ACC Network game each week with Dave O’Brien and Tim Hasselbeck. But in the cutthroat and superficial world of television, don’t count the former Miss Kentucky out of a massive career jump.

You wanna get nuts?! Let’s get nuts! On the surface, this doesn’t make any sense, as Nolan has no experience on college football or sideline reporting for ESPN. But keep in mind that ESPN is reportedly paying her over $1 million per year just to currently be a utility player without a real home on TV. Nolan would bring a comedic twist to the role like Pat McAfee did when joining GameDay if ESPN wanted to infuse the broadcast with more fun.

All of the women listed above were sideline reporters for ESPN’s college football coverage last season. Yes, we’re saying there’s a chance they land these coveted roles, just not a likely one considering all the other aforementioned options.