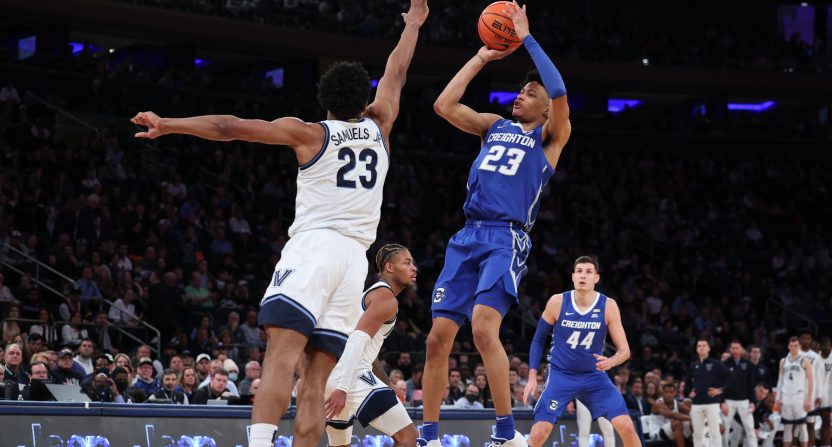 The Villanova Wildcats earned their fifth Big East Tournament title in eight seasons on Saturday, defeating the Creighton Bluejays in a 54-48 slugfest.

The big reason for the low score? Abysmal three-point shooting. And at one point during the game, Fox announcer Gus Johnson got pretty fed up having to make sense of it all.

The Wildcats have lived and died by the three-pointer all season long and while it tends to work out for them in the end, that means watching a Villanova basketball game means watching a whole lot of missed shots. Two players on the squad attempted over 200 three-pointers this season. One of them, Collin Gillespie, is among the top sharpshooters in the country, hitting over 42% of his threes. Even so, with a 35.9% team three-point percentage, Villanova viewers have watched them miss over 540 three-pointers so far this year.

That number grew on Saturday as, at one point, Villanova and Creighton were a combined 4-of-38 from three and they finished 8-of-32 and 3-of-29, respectively. It was enough to put many a basketball purists’ teeth on edge.

One of them happened to be calling the game. Johnson, who loves nothing more than making a meal out of a big shot, was stymied by the misses. Eventually, they broke him, and he started openly questioning where the sport had gone wrong, laying the blame at the feet of NBA superstar Steph Curry.

#GusJohnson keeping it real at the #BigEastTournament… volume up, what a miserable game this has been to watch. Be better. #BIGEASThoops #MarchMadness pic.twitter.com/B4vjQ6kISe

“Some of these shots these kids are taking are horrible,” said Johnson, looking to analyst Jimmy Jackson for answers. “Is this this analytics…crap?

“Yes it is,” said Jackson. “You pour so much into shooting the three. It’s either a three or layup.”

“Well it is, and that’s today’s game,” Jackson responded.

“Steph Curry is ruining the game of basketball. He’s a phenomenon and everyone thinks they can be Steph Curry and it just doesn’t make any sense.”

Johnson gets some kind of award for hitting two of the most tried and true complaints that older basketball fans have about the modern game, that “analytics” is ruining the sport and that Curry, specifically, is ruining the sport by inspiring young players to “shoot their shot.”

“I’ll get tagged on something on social media, like, ‘You ruined the game,’” said Curry in a February interview in response to this complaint. “Anybody who knows basketball knows where I stand on that. It’s an amazing way to play the game. It opens up the creative. Everybody loves to shoot the ball. But you can’t skip the work and years and years and years and years of reps that I put in and everybody on this level has. So, don’t skip that process. It is a fun way to play, and it’s dope to know that everybody feels an attachment to it.”

For better or worse, basketball has evolved and the three-pointer has been a core component of the college and NBA offense for quite some time. And there are reasons head coaches like two-time national champion Jay Wright employs it. If it didn’t work, he wouldn’t do it. So you either need to get used to this “analytics crap” or get out of the way.

For what it’s worth, Johnson’s best moment of the entire broadcast came courtesy of, what else, a three-pointer.

Not too shabby for some “analytics crap.”