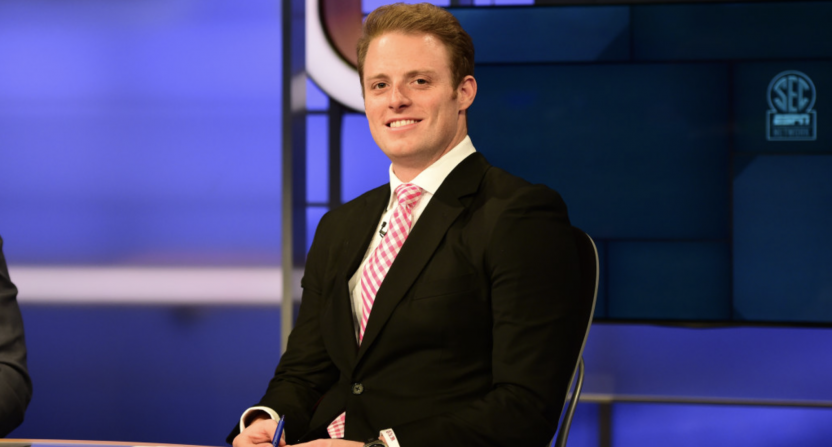 Oregon defensive end Kayvon Thibodeaux created a firestorm this week with comments to Fox Sports’ Joel Klatt about choosing that school over Alabama. Thibodeaux spoke about the “stigmatism” (sic) of Alabama education with “It ain’t the West Coast. It ain’t Harvard…I don’t know if my degree would mean anything,” and Klatt said “No, I hear you,” which led to him later apologizing for not pushing back. On Thursday morning, ESPN and SEC Network commentators Greg McElroy (seen above in December 2020) and Cole Cubelic discussed this on their morning radio show on Birmingham’s WJOX, with both pushing back at Thibodeaux’s comments about Alabama and with McElroy (an Alabama grad) in particular challenging Thibodeaux to compete with his Wonderlic score:. Here’s a transcription of some of that from Erik Hall at USA Today:

Cubelic and McElroy both chastised Thibodeaux for saying “stigmatism” when he meant “stigma.”

“He says he doesn’t like the stigma that athletes are dumb jocks, and yet, he sounds like a dumb jock,” McElroy said.

…”What I don’t understand is why he felt the need to cut down Alabama,” McElroy said. “And as someone who has always taken his academic situation very seriously, I’ll just come at him with this — if he’d like to take an IQ test, I’m available. If he’d like to take the Wonderlic test, I’m available. As a proud graduate with multiple degrees from Alabama, I will put my degree up against his any day of the week.”

“I’d like to show him the offers, because I would be willing to bet that Harvard didn’t offer him,” McElroy said. “I think they probably would have taken him, but Harvard did offer me — as did Yale, as did Princeton, as did almost every Ivy League school along with Duke, Stanford, Northwestern and Vanderbilt. And I chose Alabama, so put ‘er there Kayvon Thibodeaux.”

It’s understandable why McElroy in particular is annoyed about Thibodeaux’s shot at Alabama’s academics. McElroy was known for academic excellence while at Alabama, and was a Rhodes Scholarship finalist in 2010. And it makes sense for him to respond a bit here. However, the Wonderlic duel idea is a bit much, especially as that test has been heavily criticized, and the NFL is moving away from it (as Hall’s USA Today colleague Mike Freeman discussed earlier this month). Granted, there’s no really good way to measure “intelligence” (and different kinds of intelligence present differently), but a Wonderlic duel wouldn’t prove much of anything.

What’s interesting about this whole situation is that it all could have been avoided if Thibodeaux had been a little more careful with his initial comments. If he’d focused on praising Oregon’s academics as a reason he went there, he would have been praised for taking that side into consideration when making a university decision. (And Oregon does have strong academics, as discussed in all the coverage of then-Washington coach Jimmy Lake’s ill-advised attempt to slam them this fall.) It’s also notable that Thibodeaux said in that interview with Klatt that his decision wasn’t just about the academics, but also about Oregon’s relationship with Nike and about his desire to work with that company (something he’s talked about before). And even if Thibodeaux had said “Oregon was a better fit for me academically,” that probably wouldn’t have caused much of a stir; different universities shine at different things, and many students have individual needs and approaches that work for them. But his decision to throw all this shade at Alabama along the way led to this giant controversy, and now it’s even led to this Wonderlic duel challenge from McElroy.