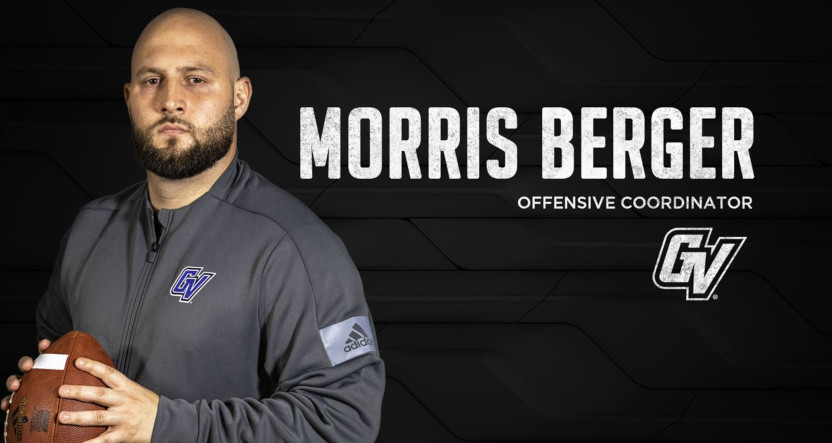 For the second time in less than 12 months, a college football coach is in hot water for remarks about Hitler. Last February, that was Independence Community College head coach and Last Chance U figure Jason Brown, who texted German player Alexandros Alexiou “I’m your Hitler now figure out your life” and wound up resigning afterwards (before getting charged with eight felonies involving blackmail and identity theft for trying to silence newspapers). This time around, it’s new Grand Valley State (based in Allendale, Michigan) offensive coordinator Morris Berger, who was suspended by the school Monday after he praised Adolf Hitler in remarks to Kellen Voss of the school’s student newspaper, The Grand Valley Lanthorn.

Berger said: “Over the last 11 years I have taken great pride in the responsibility and privilege of being a teacher, coach, mentor and a valued member of the community. I was excited and proud to be at Grand Valley, and am disappointed that I will not get the opportunity to help these players in 2020. However, I do not want to be a distraction to these kids, this great university or Coach Mitchell as they begin preparations for the upcoming season.”

Coach Matt Mitchell, in accepting Berger’s resignation, agreed it is in the best interests of the team and the university. “Nothing in our background and reference checks revealed anything that would have suggested the unfortunate controversy that has unfolded. This has been a difficult time for everyone. I accepted Coach Berger’s resignation in an effort for him to move on and for us to focus on the team and our 2020 season.”

Here are Berger’s initial remarks to Voss, which were first published last Thursday:

KV: So you graduated from Drury with a degree in History, you’re a history guy. If you could have dinner with three historical figures, living or dead, who would they be? And I’m ruling out football figures.

MB: This is probably not going to get a good review, but I’m going to say Adolf Hitler. It was obviously very sad and he had bad motives, but the way he was able to lead was second-to-none. How he rallied a group and a following, I want to know how he did that. Bad intentions of course, but you can’t deny he wasn’t a great leader.

KV: The way he was able to get people to rally around him was crazy.

MB: Yeah, that’s definitely one. You have to go JFK, his experience with the country and being that he was a good president and everything. And this might sound crazy, but Christopher Columbus, the ability to go on the journey he was on and his emotion into the unknown. Think about putting yourself in the setting of that unknown, and then to take it all in as you arrive is crazy.

Yeah, you probably shouldn’t go around praising Adolf Hitler’s leadership. (And really, that’s one of the three people in all of history you’d want to have dinner with?) And contrary to Berger’s comments, you can deny that Hitler was a great leader; beyond the atrocities he was responsible for, there are plenty of historians who have pointed out factors well beyond Hitler’s personal leadership that led to his rise to power, plus examples of his leadership failures. But beyond the historical debate, this is an absolutely incredible way for a new offensive coordinator to get in trouble, especially in a general interview that’s mostly about his football career. And it’s also interesting that an editor’s note on the story mentions that the last two responses (the above-quoted ones about Hitler) were “mistakenly removed” from the story after its initial publication:

Editor-in-Chief’s Note – 1/26/20:  After it’s initial publication, the final two responses were mistakenly removed from this story. It has since been reverted back to its original version, and is a direct transcription of the full, recorded interview.

There doesn’t seem to be any debate that Berger said this, but it’s incredible that he did. And it’s a rare case of Godwin’s Law showing up in a newspaper interview rather than an online discussion; with some people, maybe just a long-enough one-on-one conversation is enough for it to eventually turn to Hitler. And if the Jason Brown situation didn’t teach coaches to stop referencing Hitler, this one really should. But it’s wild that a coaching suspension, and now a resignation, has resulted from “What historical figures would you like to have dinner with?”