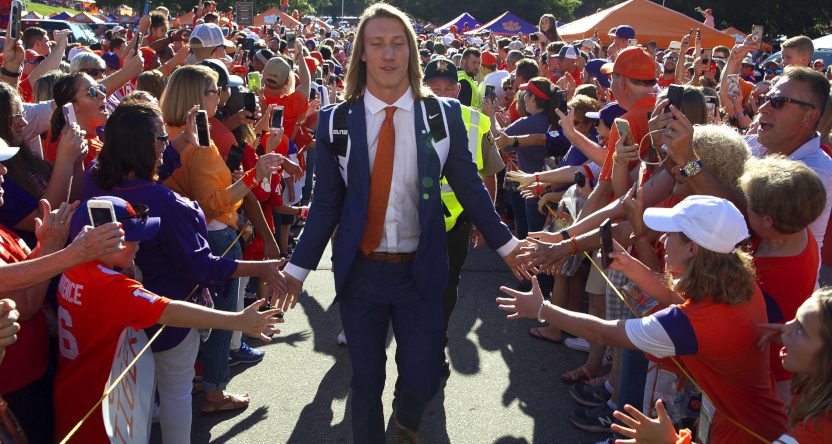 The reigning national champion Clemson Tigers (including quarterback Trevor Lawrence, seen above pre-game) begin their season tonight against the Georgia Tech Yellow Jackets (8 p.m. Eastern), but because the game is on the new ACC Network, there will be a whole lot of people who can’t watch it. The network launched last week with as many as 36 million subscribed homes thanks to a deal with Charter, but that still means that there are at least 83.9 million homes in Nielsen’s estimated U.S. TV universe who don’t have an ACC Network subscription. That includes a whole lot of big providers, including Comcast, AT&T Uverse and more. However, as per John Ourand of Sports Business Journal, Dish/SlingTV signed a “handshake deal” for this one game:

The Clemson-Georgia Tech game is just the first ACC Network one that will be unavailable to those who don’t have a network subscription. There are going to be four more games on ACCN this weekend, with Utah State playing at Wake Forest at 8 p.m. Eastern Friday night and East Carolina-NC State, Virginia Tech-Boston College and Virginia Tech-Pittsburgh all taking place there Saturday (at noon Eastern, 4 p.m. Eastern, and 7:30 p.m. Eastern respectively). And starting next week, there will be games on “ACC Network Extra,” digital-only content that will require authentication of an ACC Network subscription.

Of course, none of that necessarily means that ACC Network is a failure. The estimated 36 million-ish homes for the network at launch still compares favorably to some other networks (especially the Pac-12 Networks, currently only in an estimated 19 million homes), and they have deals with a lot of big providers. The conference network launch is also going to lead to a lot of revenue for their schools, which could help them improve their position in the pecking order against other Power 5 conferences. But the ACCN launch has come without a lot of big providers signing on, and that means there will be plenty of fans annoyed about not being able to watch their teams this weekend.