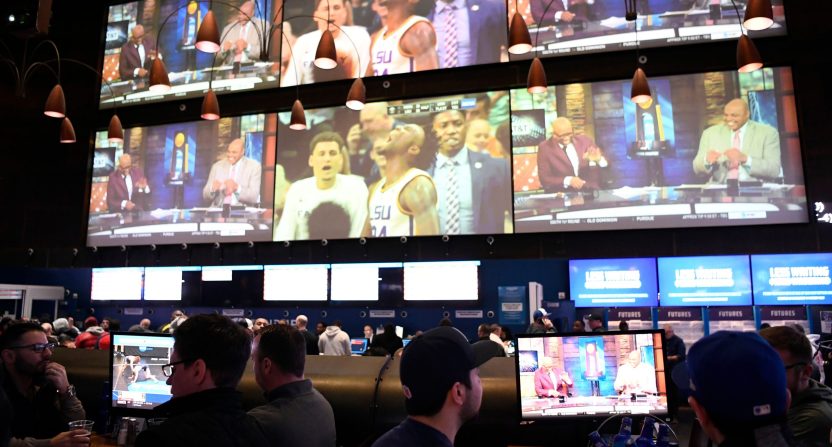 NEW ORLEANS — During the pregame hullabaloo before Kansas and North Carolina’s National Championship matchup, the stream of 2010s pop music and historic Final Four moments displayed on the videoboards stopped for a sternly-worded message.

Sports wagering jeopardizes the well-being of student-athletes and the intercollegiate athletics community.

The above booming out over the public-address system of a venue renamed the Caesars Superdome last summer oozes irony. But, it’s a fitting snapshot of the new reality in which college sports exist.

Since May 2018 when the Supreme Court opened sports betting per individual states’ discretion, media has been awash in gambling. What was once a wink-and-nod — like Brent Musburger’s references to our friends in the desert — has become an almost unavoidable stream of openly citing point spreads and over/unders.

The moment I checked Twitter upon arriving in Louisiana from California, which has not legalized sports betting, I saw a timeline with repeated promoted tweets featuring Li’l Wayne, J.B. Smoove, and interchangeable vlogger types offering me free winnings if any team in the Final Four scored a point.

All of the major sports networks feature dedicated betting programming. ESPN and FOX — the heavyweights of college athletic broadcasting rights — sprinkle plenty of it into flagship and game broadcasts, including the latter’s promotion of its FOXBet app.

College GameDay often feels like the spirit of Jimmy The Greek was hired as a producer, whether it’s football Saturday or March Madness as this postseason’s installment demonstrates. 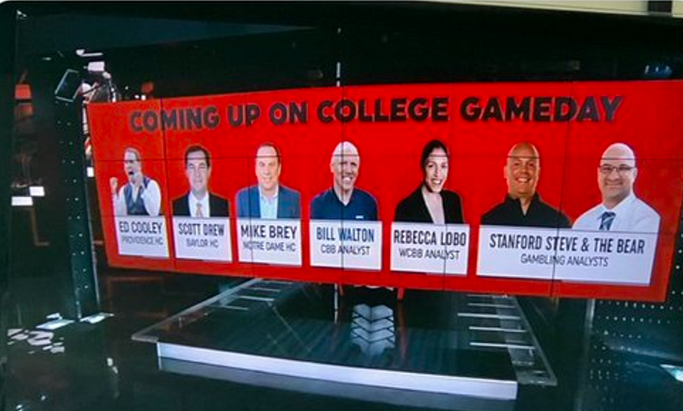 Wagering’s origins in sports date back…well, in the brilliant words of Dr. Steve Brule, the first gambler was, “Who cares? Probably some hunk who said, ‘Wanna bet?'”

Suffice to say bets were placed on competition long before Bugsy Siegel set foot in the Mojave Desert.

That media must no longer pretend there isn’t a substantial audience interested primarily in their wagers may be for the best. What’s more, in an era when sponsors that support sports media outlets spend markedly less on advertising, casinos and betting apps pump in sorely needed revenue.

But for college sports, there’s a difficult balancing act with legalized gambling’s proliferation.

The potential for scandal in sports betting’s increased ease and accessibility became evident this spring when the NFL suspended wide receiver Calvin Ridley for wagering on the league.

I bet 1500 total I don’t have a gambling problem

Ridley’s situation is precisely the kind of scenario college sports must avoid.

College basketball in particular has an ugly history when it comes to gambling. The game nearly died just as it was beginning to take off in the post-World War II era, a result of the point-shaving scandals involving a variety of New York-area programs undercovered in 1951.

Most noteworthy was City College of New York, the 1950 dual-NIT and NCAA champion. For the reigning national titleholders to be implicated was a blow to sports on par with the Chicago Black Sox scandal of the 1919 World Series.

The sport survived, of course, as it did other point-shaving scandals — like the Boston College incident of the late 1970s, referenced in GoodFellas and chronicled in a 2014 30 for 30 documentary.

But while such moments failed to kill the game, it cast a pall all the same.

Not long after the ‘51 scandals, the NCAA avoided hosting basketball games at Madison Square Garden. MSG was a den of illegal gambling activity, as Matthew Goodman illustrates in the excellent book The City Game, making the venue ripe for nefarious bookmakers to influence unpaid athletes.

The NCAA never has given an official reason for its 53-year layoff between tournament games hosted as The World’s Most Famous Arena, but a 2014 New York Times article says the point-shaving indictments of ‘51 are the consensus opinion.

College athletics’ governing body’s moratorium on postseason events in Nevada was much more clearly stated: March Madness never came to the Battle Born State because of its legalized sports betting.

The Supreme Court’s ruling in Murphy v. National Collegiate Athletic Association forced the NCAA’s hand; banning tournaments from Nevada when other states were free to allow sports wagering would have been nonsense.

Further, college basketball already rules Las Vegas come March with the West Coast, Western Athletic, Mountain West, Big West, and Pac-12 Conferences all hosting tournaments there. The Big Dance appetizer these leagues offer has gone on without incident, and made the tournaments an attraction for spectators.

The Pac-12’s move to Las Vegas in 2013 after 10 years of playing in front of minuscule crowds at Los Angeles’ former Staples Center is heralded as one of the conference’s few undeniable successes in former commissioner Larry Scott’s tenure.

Meanwhile, T-Mobile Arena — home of the Pac-12 Tournament since 2017 — hosts Nevada’s first-ever round of March Madness in next year’s West Regional.

Never mind the irony of the NCAA’s DontBetOnIt.org message booming through a venue named for a casino; next year, a team will advance to the Final Four on the heart of The Strip.

The 2023 West Regional will also occur a $5 Lyft ride from the Thomas and Mack Center, where Jerry Tarkanian’s UNLV dynasty crumbled under a cloud of gambling-related speculation.

Viewers of the new HBO series Winning Time may have just recently learned for the first time about the murder of longtime Tarkanian confidant and agent Vic Weiss in 1979.

The entertaining albeit highly fictionalized dramedy makes inferences intended to lead the audience to a specific conclusion — a dinner with Weiss, Tark, and Jerry Buss discussing the Los Angeles Lakers coaching vacancy, interrupted when a nearby table of wiseguys send the Runnin’ Rebels coach their regards is played up for effect.

Weiss’ death shortly thereafter remains unsolved, despite the efforts of Det. Leroy Orozco, who was later involved in the manhunt for “Nightstalker” Richard Ramirez. Winning Time heavily insinuates mafiosos murdered Weiss to keep Tark at UNLV, despite a 1989 Los Angeles Times report revealing Weiss was both deeply in debt and had been skimming from the mob.

All the same, Weiss was indeed discovered killed and stuffed in a trunk in Hollywood in 1979, and Weiss was in fact a close ally to Tarkanian at a time when Mafia-influence controlled Las Vegas. To wit, Weiss’ murder was three years before the attempted car-bombing of bookmaker Frank “Lefty” Rosenthal, depicted in the film Casino as Sam “Ace” Rothstein.

And UNLV’s place as a college basketball juggernaut very much ended with members of the 1991 Final Four team — including 1990 NCAA Tournament Most Outstanding Player Anderson Hunt — photographed in a jacuzzi alongside a man nicknamed “The Fixer,” Richard Perry.

An aggressive crackdown on Las Vegas’ criminal element through the 1980s removed the more unseemly — and sometimes, downright terrifying — aspects of sports betting. We live in a new world where casinos are promoted by a comedian like J.B. Smoove instead of being under the protection of enforcers like Tony “The Ant” Spilotro.

But given the decades of baggage, one can understand why college athletics should remain jumpy about gambling’s march into the mainstream.