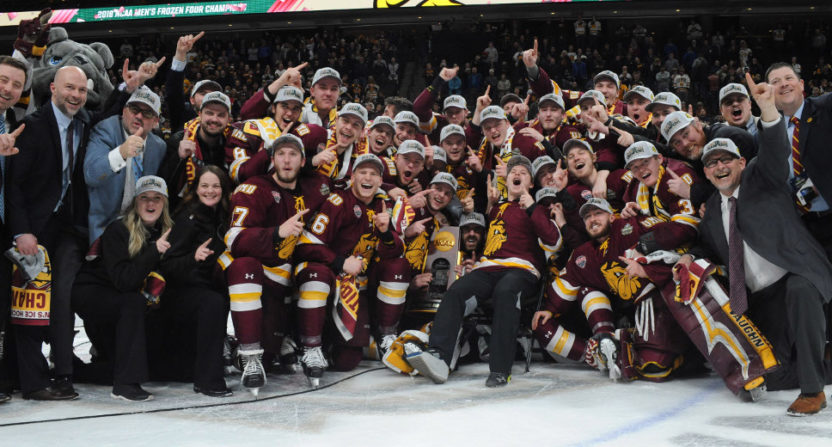 The NCAA men’s Division I hockey championship on ESPN produced impressive ratings this year, with the Frozen Four’s three games as a whole producing a 49 percent year-over-year increase and the national championship (which saw Minnesota-Duluth beat Notre Dame 2-1 on Saturday, April 7) rising 40 percent year-over-year. The three games overall averaged 409,000 viewers, with the title game averaging 653,000, both the best numbers since 2014. And the schools involved might have had a fair bit to do with that.

The field for this year’s Frozen Four was Notre Dame, Minnesota-Duluth, Ohio State and Michigan, with enrollments of 12,292, 11,168, 59,837 and 44,718 respectively (as per Wikipedia) and three of those in the Big Ten for hockey. (Ohio State and Michigan are Big Ten members across sports, while Notre Dame is independent in football and in the ACC for most sports, but in the Big Ten for hockey).

Notre Dame, Ohio State and Michigan are certainly well-known national brands with plenty of fans of their athletic programs beyond just past and present students. (Minnesota-Duluth is well-known to college hockey fans, as this marked their sixth Frozen Four and their second title, but that makes them more similar to a lot of previous Frozen Four teams than Ohio State, Michigan and Notre Dame.)

Compare 2017, where the Frozen Four included Notre Dame and Minnesota-Duluth again, but also Denver and Harvard (with Denver eventually beating Minnesota-Duluth for the title); Denver and Harvard are renowned hockey schools (Denver has eight national titles and 16 Frozen Four appearances, Harvard has one national title and 13 Frozen Four appearances), but smaller enrollments (11,614 and 22,000 respectively), and probably less prominence amongst general sports fans.

Meanwhile, that 2014 tournament that produced the previous impressive rating featured Minnesota, North Dakota, Union (the eventual champions over Minnesota) and Boston College. So that’s two major conference teams (Boston College plays hockey in Hockey East, but is in the ACC for most other sports, while Minnesota is in the Big Ten), and that’s probably why it did pretty well.

This is nothing new to fans of other sports, of course. Teams with bigger fanbases tend to pull in bigger ratings, and in the NCAA, larger schools from Power Five conferences with well-known brands tend to do well. That’s likely part of why this year’s NCAA Tournament men’s basketball ratings took a bit of a hit; lesser-known teams make for great stories, but don’t always pull in the eyeballs. In fact, CBS Sports chairman Sean McManus was particularly frank about that this year, telling Sirius XM host Chris “Mad Dog” Russo that Kentucky’s loss to Kansas State (another power conference team, even, but a less-prominent basketball brand) was a blow for CBS and Turner:

“From a television standpoint, you really root for the big teams,” McManus said. “Last night’s Kentucky outcome was not good for us and not good for TBS at all. Kentucky being the blue bloods that they are, and having the television draw that they have, that really hurt us. Kansas State winning — I have nothing against Kansas State as a school or a team — but that really hurt us.”

And that’s maybe even more interesting to explore in hockey, where the smaller schools from non-Power Five conferences aren’t always underdogs and are sometimes even more likely to win than their major-conference opposition. The likes of Denver, North Dakota and Minnesota-Duluth are huge powerhouses in the college hockey world where they’ve won a lot of titles in the past and are likely to do so in the future.

But there’s probably a broadcasting appeal in featuring Ohio State or Michigan instead, as there are maybe more casual fans of those schools to draw in; the ratings would seem to back that up. And that’s something that will be interesting to watch down the road. The Big Ten put three teams in the Frozen Four this time, but that’s unlikely to happen every year given the impressive competition from many other conferences. But this result turned out to be pretty great for the ratings.

The overall takeaway isn’t necessarily that big-name schools are going to dominate the Frozen Four going forward, or that it’s a crisis if smaller schools make it. The tournament has still drawn respectable ratings for ESPN even in the editions that didn’t pull in as many viewers as this year. But having big-name schools in the Frozen Four certainly seems to be nice for the tournament broadcaster, as shown by this major ratings jump, and that produced solid ratings indeed and made this a pretty worthwhile property. And that’s an interesting element of the Frozen Four; while all TV sports are impacted by matchups to some degree, this one seems to be even more impacted by who’s involved than most sports. So just how important it is for ESPN may well depend on who’s playing.