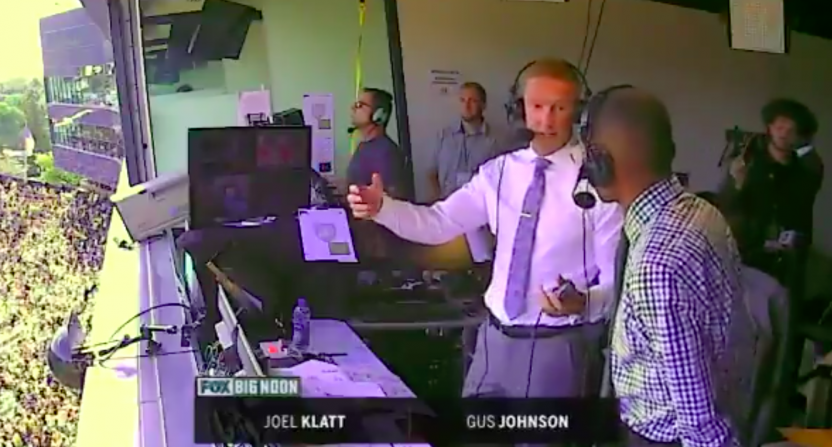 The Army Black Knights certainly gave it their all on Saturday in an upset bid against the Michigan Wolverines in The Big House. They took the No. 7 team in the nation to double overtime before falling, 24-21, though not before reminding the nation that service academy football players can still hang with the blue-chippers out there.

It’s especially impressive given the way that the life of a five-star scholarship student-athlete at a school like Michigan and a student-athlete at Army can diverge in just a few years. As it currently stands, West Point graduates come into the school knowing that they face a multi-year commitment to the military immediately after graduating. However, that rule has been up for debate in recent years and has even changed a few times.

Most notably, President Barack Obama changed that policy and made it so service academy athletes, if good enough, could begin a professional career immediately after graduating. That was a big change for these student-athletes, who often lose much of their “value” to pro leagues by the time they complete their military service. At the time, Navy quarterback Keenan Reynolds was turning heads and attracting NFL interest, but he needed the policy change in order to get that opportunity. Because of the change, he was drafted by the Baltimore Ravens and able to join them in preseason camp. Though he was cut, he also had stints with the Washington Redskins and Seattle Seahawks.

When Donald Trump was elected as President, he rescinded that policy and service academy student-athletes once again would need to wait until their military commitment was complete before pursuing a pro sports career. At the time, Defense Secretary James Mattis said that the policy was rescinded since the service academies “exist to develop future officers” and that graduates should fulfill their obligations for duty. As Pentagon officials wrote in 2017 when rescinding the policy, “[Service academy graduates] enjoy the extraordinary benefit of a military academy education at taxpayer expense.”

Strangely, Trump reversed course in 2019 and signed a presidential memorandum to create a new policy that will allow service academy student-athletes to go pro upon graduation, which was essentially the same policy he’d rescinded. The Pentagon had said previously that it would stand firm on its policy of not allowing deferments, although under the new(old) policy they have begun allowing some student-athletes to defer their service. Such was the case of Army grad Brett Toth, who now plays for the Arizona Cardinals while also fulfilling his commitment via the Arizona State University ROTC.

It all sounds a bit like a snake eating its own tail, so it can be a little confusing to understand who did what at first glance. You would think, however, that someone would want to get all the facts together before getting in front of a microphone to explain the situation to a national TV audience. Fox Sports’ Joel Klatt apparently decided to go a different direction.

This is the exact opposite of what actually happened. Obama changed the policy in 2016 to allow service academy members to go straight to the pros, in response to Navy QB Keenan Reynolds getting drafted by the Ravens. Trump rescinded the policy a year later. Shameful revisionism pic.twitter.com/WcsPAp49oj

“Just to give you some background, these academy members all over the country are held to their commitment to the five years of service after they’re done playing. And President Trump directed the Pentagon to actually look at that policy and allow for these players the opportunity, if earned, to play professionally in their sports.”

Klatt’s explanation is factual to a point, but certainly misinterprets the entire situation and creates a revisionist storyline. It negates the fundamental truth that the only reason service academy members needed this new policy is because Trump himself rescinded it. He is less a champion of their cause and more a janitor cleaning up his own mess.

It’s unclear if this was a mistake by omission or a purposeful attempt to dilute the facts. Regardless, given the atmosphere right now surrounding U.S. politics and the value of truth, there’s something to be said for telling the whole story when you’re going to speak about a topic like this, even during college football games.