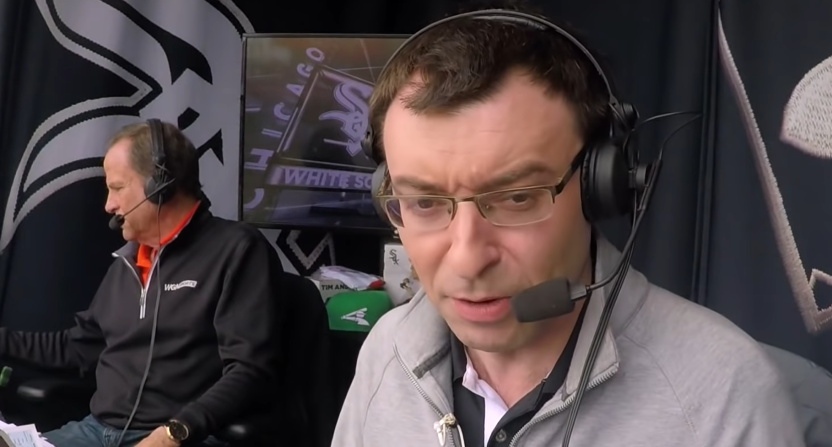 Jason Benetti’s move to Fox Sports has now officially come to pass. Last week, Jeff Agrest of The Chicago Sun-Times reported that Benetti was in talks with Fox, and Brett McMurphy of The Action Network reported Sunday night that Benetti would in fact leave ESPN and join Fox for college football, with Andrew Marchand of The New York Post adding that Benetti is also expected to call MLB games and college basketball there. Fox then officially announced the move Thursday:

“Jason is a top-tier broadcaster that elevates every production he joins,” said Zager. “His reputation precedes him, and we are excited to add his passion for sports and broadcasting to our lineup starting this fall.”

…“I am simply ecstatic to join FOX Sports,” said Benetti. “The company has a reputation for first-class live sports coverage and first-class people behind that coverage. I’m honored to be a part of that team.”

Fox’s release doesn’t have more specifics on what Benetti (seen at right above on a White Sox broadcast this April) will call for them beyond “contributing to the network’s live sports slate beginning with college football,” but Marchand’s report of MLB and college basketball makes sense. Fox needs some more depth on the MLB side after Joe Buck’s departure to ESPN, which led to Joe Davis being elevated to their top baseball role. Davis also appears likely to take the #2 role vacated on the NFL side following Kevin Burkhardt’s promotion into Buck’s old slot, so that clears a #2 slot on college football, and it looks like Benetti will slide in there alongside Brock Huard (behind the top team of Gus Johnson and Joel Klatt).

Benetti has spent the last 11 years at ESPN, calling games in college football, MLB, college basketball, the NFL, the NBA, and more. He’s also served as Peacock’s lead MLB broadcaster for their Sunday package this season, and has been the lead broadcaster for the Chicago White Sox on NBC Sports Chicago since 2016. He’s done Olympic and other work as well.

It’s clear that Benetti’s ESPN work is going away following this deal. And Marchand reported that his Peacock work is only for this year too, but he will stay as the White Sox voice for next season and beyond. It will be interesting to see how Benetti fits in at Fox, and what they have him calling beyond college football.