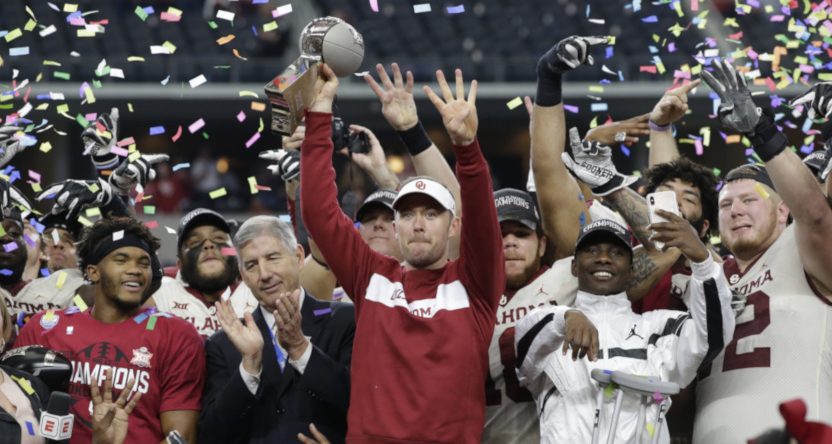 It won’t be Fox carrying the Big 12 championship game in 2019, 2021 and 2023, but it might be ESPN. Fox and ESPN have the regular conference rights, and Fox aired the game in 2017 (the first year it was played since 2010; a rule prohibited conferences with less than 12 teams from having a championship game, but that rule was changed in 2016 and the conference brought the game back after that), while ESPN aired the 2018 edition and has already acquired the rights to the 2020, 2022 and 2024 games. As per John Ourand and Michael Smith of Sports Business Journal, the conference was optimistic Fox would pick up the remaining odd-year games, but Fox declined:

The conference has been shopping the 2019, 2021 and 2023 games to media companies over the last several months after Fox told Big 12 officials that it was not interested.… The Big 12 had hoped that Fox, one of its two primary media partners, would pick up the rights to the championship games in the odd-numbered years. Fox carried the 2017 game as part of a mediated settlement around conference expansion, paying about $25 million for its rights. But the network and the conference could not come to terms on the other three available games. Sources said the last offer made to Fox valued the game in the high teens.The conference is trying to get at least $20 million for the game, sources said.

It’s interesting that Fox turned down live sports rights, such a key pillar of the “new Fox” structure, but it seems that was about scheduling as well as price. Ourand and Smith write that “Sources said a main reason for Fox’s lack of interest comes down to scheduling,” with the Big 12 championship likely having to compete against the SEC (CBS) or ACC (ESPN) championship games or having to be held on Friday night. (And it’s notable that Fox will have WWE Smackdown on Fridays beginning in October, making Friday a place where it’s harder for them to put other programming.)

However, while ESPN already has a lot of championship game programming (the ACC game, the Pac-12 game every other year, the Big 12 game in those even years, and a lot of Group of Five title games), they seem interested in adding these odd-year Big 12 games as well. And they have first right of refusal; the conference reportedly can’t take these games to a third network unless both Fox and ESPN turn them down, and price disputes are to be handled in arbitration. Someone else could potentially land these (the SBJ piece notes that “at least two networks are said to have shown interest,” so ESPN and someone else), but the most likely destination seems to be ESPN.And there’s significant ratings potential here for them. This year’s game (Oklahoma’s win over Texas, pictured above) drew a 6.2 rating and 10.16 million viewers on ABC, up 63 and 72 percent respectively year-over-year from the 2017 version (Oklahoma-TCU on Fox). It’s also notable that ESPN has at least two high-visibility networks to air conference championship games (ABC and ESPN), while Fox is more likely limited to its broadcast network for these given the lower profile of FS1.The overall takeaway here may be that while Fox is still focused on picking up sports rights, that’s not going to necessarily be at any price or at any scheduling cost. This report has them being pretty selective about these Big 12 championship games, with those scheduling concerns a particular reason why. But this championship game can still be a compelling ratings draw with the right matchup, and it might make sense for ESPN to add it, even with an already-crowded rights stable that weekend. If they also turn it down, though, it could be quite interesting to see who does wind up with these games, and for how much.[Sports Business Journal]