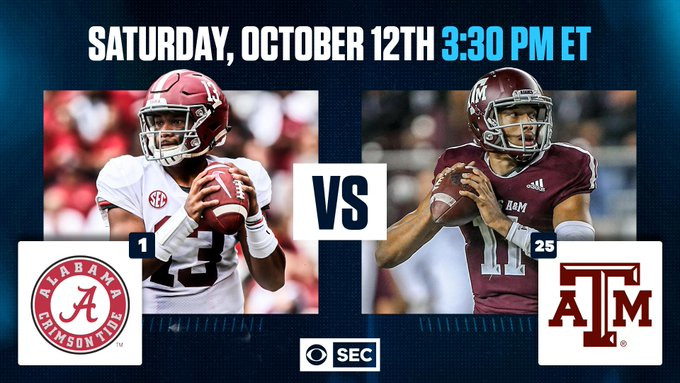 Most of the time, NCAA scheduling sees the best matchups (in terms of rankings) go to the network that pays for the first pick in the conference in question, but that’s not the case with the SEC this week. CBS pays for first pick each week in its SEC on CBS package (which sees them paying $55 million a year through 2023-24, one of the best deals out there), and that usually sees them taking a higher-ranked matchup. But this week, they have #1 Alabama at #24 Texas A&M, leaving #7 Florida at #5 LSU to ESPN.

Of course, the timing of that decision is part of this. CBS made that decision back on Sept. 30 before last week’s games, which saw Florida (then No. 10) beat then-No. 7 Auburn. (LSU was also No. 5 last week, but they were playing unranked Utah State, and their 42-6 win wasn’t exactly unexpected.) But Texas A&M was #25 last week, so Florida would have been presumably well ahead of them even with a loss to Auburn. And if CBS really cared about the outcome of Auburn-Florida, they could have exercised one of their options to wait, but they only get a couple of those each year (they’re using one for next week and deciding between LSU-Mississippi State, Florida-South Carolina, and Kentucky-Georgia).

Alabama also generally draws very well on TV, and they come with the Birmingham market, which routinely ranks at the top of local college football ratings even for games without the Crimson Tide. And there’s always a segment of viewers who just want to watch the #1 team. And while LSU often draws pretty well too, it’s maybe notable that their nearest big market (New Orleans) is ranked #50 to Birmingham’s #43, and is no longer included in the Nielsen revised overnight ratings (which only count the top 44 markets).

Also, Texas A&M has fans in a lot of pretty big Texas cities, one of the big reasons they were selected in SEC expansion ahead of the 2012 season. So picking Alabama-A&M may lead to better ratings than picking LSU-Florida would have. (Although we’ll never know exactly how the latter would have done in that slot; CBS games tend to draw better ratings than ESPN ones regardless of matchup thanks to the extra 35 million potential homes they have from being on broadcast rather than cable, and being one of the best games in the afternoon slate tends to help as well.)

But it’s also worth noting that CBS is limited in the number of times it can pick a particular team, which appears to be five. Back in 2014, that led to them being unable to take the Alabama-Auburn Iron Bowl and taking the Ole Miss-Mississippi State Egg Bowl instead (which wound up on broadcast TV for the first time since 1964), and the Iron Bowl promptly tied a regular-season ratings record for ESPN. This will mark the third time CBS has taken the Tide this season (they previously showed Alabama-South Carolina and Ole Miss-Alabama), so this Alabama pick may limit CBS’ options down the road. The two big ones left on the schedule are vs. LSU (Nov. 9) and the Iron Bowl at Auburn (Nov. 30), and CBS can presumably still grab both of those, but picking Alabama when they didn’t necessarily have to here may mean that they can’t take any of the Tide’s other remaining games. Granted, those (vs. Tennessee, vs. Arkansas, at Mississippi State, vs. Western Carolina) don’t look all that great at the moment, so maybe Alabama-A&M was a fine one to pick.

This does mean that ESPN gets a higher-profile SEC matchup than normal, though, and they’re pulling out plenty of stops to promote that. College GameDay (with John Goodman as the guest picker) will be live from Baton Rouge, and ESPN’s also going to broadcast it in 4K as the first in a the new “Samsung QLED 4K Game of the Week” series. And there will be plenty of interest in that one, both from fans of the schools and from neutrals intrigued by a top-10 clash (the only one this week; Fox’s No. 6 Oklahoma-No. 11 Texas clash falls just outside). We’ll see how this move works out in the ratings for both ESPN and CBS.