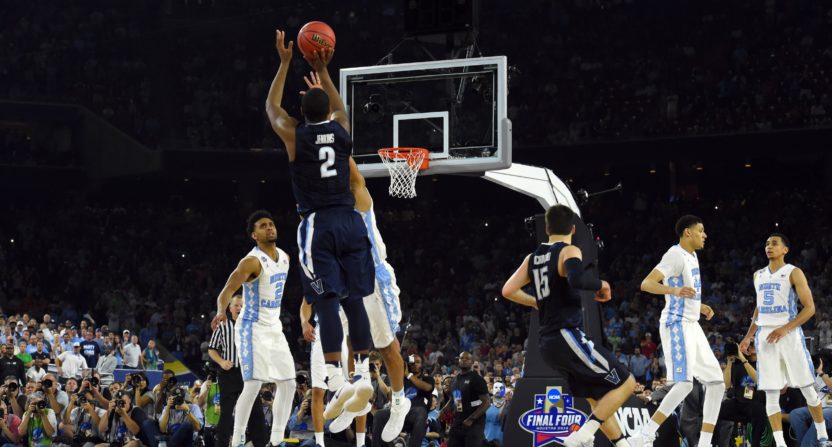 It’s the middle of March, and that means the eyes of the sports world are firmly focused on the NCAA Tournament. With that, I’m curious: what NCAA Tournament buzzer beater (ever!) is your favorite? It can be because your team hit the winning shot, because of the call, the drama of the shot, or because a team you hate got knocked out – your criteria doesn’t matter here.

(Also, if the shot wasn’t technically a buzzer beater and there was a second or so left on the clock, that’s fine too.)

We asked our staff, and here are their responses.

Andrew Bucholtz: It’s an obvious choice, but I can’t think of anything that’s ever beaten the 1983 championship game buzzer beater, with NC State’s Dereck Whittenburg launching a ridiculous shot from near halfcout (off an attempted steal, no less) and Lorenzo Charles calmly grabbing it and dunking it. It was the perfect conclusion to that incredible “survive and advance” run by Jim Valvano and the sixth-seeded WolfPack, knocking off the top-seeded “Phi Slama Jama” Houston Cougars.

This ending is insane on multiple levels, from Whittenburg almost losing the ball on the steal to him launching a shot that deep to Charles converting it into an easy alley-oop. And Billy Packer’s “They won it!” is the perfect call for me, with his bewilderment summing up the absurdity here.

Phillip Bupp: I don’t really have a favorite. Even if one busts your bracket, you get over it after a while because all buzzer beaters are great. So instead, I’ll go with the first buzzer beater I remember seeing and that’s Bryce Drew’s buzzer beater in 1998 where Valparaiso beat Ole Miss.

Ian Casselberry: Recency bias, anyone? This Michigan fan chooses Jordan Poole’s miracle three-pointer to beat Houston at the buzzer. I know the right answer is probably Christian Laettner in 1992 over Kentucky or Kris Jenkins beating North Carolina in 2016. That shot won a championship!

If you hung me upside-down from the top of a building, I’d admit that Trey Burke’s shot to force overtime versus Kansas in 2013 was bigger. That injected a “team of destiny,” “this is our year” feeling right into the veins. But like most Michigan fans, I thought the Wolverines were done Saturday night against Houston. They hadn’t played well through the entire game (nor did they look good in their first-round game versus Montana) and I was convinced they would lose. I can’t remember going so quickly from disappointment to joy. (Really, it was disbelief.)

Poole took a shot that wasn’t supposed to go in. It was a prayer. That was going to be an airball or a carom off the backboard, right? NO. The shot will be even bigger if Michigan extends its tournament run all the way to San Antonio. Dare Wolverines fans hope for even more… ?

Matt Clapp: I was a big UCLA fan as a kid, so I’ll go with Tyus Edney beating Mizzou at the buzzer in the 1995 NCAA Tournament.

UCLA was a No. 1 seed and it appeared they were going to go down in the second round to Missouri, trailing 74-73 with 4.8 seconds left. Incredibly, that time ended up being enough for Edney to coast to coast to beat the buzzer and keep the Bruins’ season alive. The behind-the-back dribble Edney pulled off as he crossed half-court, going full-speed, was especially smooth.

It would’ve been a very memorable moment even if UCLA didn’t win another game in the tournament, but it became much more memorable after UCLA went on to win the National Championship.

Ben Koo: I spent some time on this last night and nothing popped for me. My deepest apologies.

I think without OSU having a tourney buzzer beater, it’s all just muddled.

(Editor’s note: I took the liberty of making a selection on behalf of Ben)

Joe Lucia: The Villanova-UNC national championship game from two years ago was the ultimate “from agony to ecstasy” sequence in college basketball history. Marcus Paige hit a three for North Carolina with 4.7 seconds left to tie the game at 74, making overtime seem like a foregone conclusion.

Then, Kris Jenkins launched a miracle three that eliminated the possibility of that overtime, and everyone lost their minds.

The finish of this game was wild – Nova led by six with 1:35 left. The Tar Heels then scored the next five points, and answered a pair of Wildcat free throws with a basket of their own. Following two more Nova free throws, Paige hit his three to finally tie the game…and Jenkins broke the hearts of Carolina fans seconds later. It was an incredible back and forth game, and the championship was decided by the final shot of the season – you can’t get much better than that.

Alex Putterman: This is a shamelessly homerific pick, but my favorite buzzer-beater came in the 2006 Sweet 16 when my hometown UConn Huskies came back from down five points in the final 40 seconds against Brandon Roy’s Washington team thanks to a pair of 3s from Rashad Anderson.

The second of the two shots was an off-balance heave from well beyond the arc that fell through the net with 1.8 seconds to play and prompted a hearty “ONIONS” call from Bill Raftery. I fondly remember freaking the hell out in my family’s living room. UConn went on to win that game in overtime and advance to the Elite 8, where… we don’t talk about that.

Jay Rigdon: Had it gone in, Gordon Hayward’s effort to beat Duke would be the clear #1 for me and many other people, although many other people probably didn’t put $20 on Butler at 75-1 odds to win the title before the season began. That one hurt.

In lieu of that, and instead of a few shots that helped decide games with higher stakes, I’ll go with this last-second shot that, while technically not a buzzer beater, fits just about all the other criteria you would want. It’s from 14-seed Georgia State’s first round game against 3-seed Baylor in 2015:

Ron Hunter, cast on his left foot, fell off his stool when his son R.J. nailed the deep three that sent Georgia State into the second round. I’m not sure I’ve ever laughed so hard, and that it came in service of a fun upset makes it all the better.