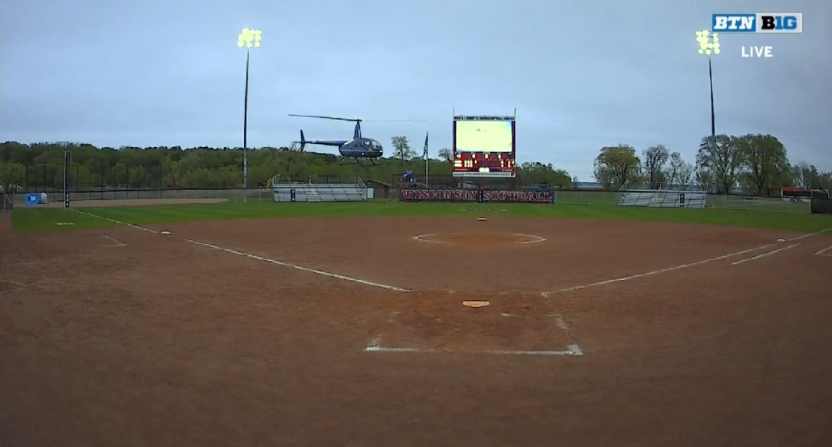 It’s been a soggy day in Madison as Wisconsin hosts the Big Ten softball tournament. Wisconsin and Minnesota was the first scheduled game, and it started at 12:03 Eastern Time. Eleven minutes later came the first weather delay, which lasted 49 minutes. Then just six minutes after play resumed, weather forced another delay, this one lasting four hours and fifty-two minutes.

Play resumed just after 6 PM ET, but the field was not in ideal condition, so someone (and bless whoever this was), decided that the best way to dry the field was to bring in a helicopter, have it hover around over the surface with the rotors acting like a giant fan blade, and hoping it helped. WKOW’s Amy Gill brought it to public attention:

MOST IMPORTANT #B1G SOFTBALL UPDATE EVER.

According to UW officials, in an hour, they are bringing in A CHOPPER TO LAND ON THE FIELD to clear out the rest of the water to play more games tonight.

Stadium will be evacuated and they will close down the road next to the field.

The stadium being evacuated was key, as it included the camera operators, but thankfully someone at BTN made the call to keep one camera rolling, because it gave us plenty of fun footage:

They even broke out a chopper delay graphic:

And hey, after another lengthy delay so (and this can’t be stressed enough) a helicopter could hover back and forth over the field in an effort to dry it out before sitting over a trouble spot and idling for a while, the game resumed.

As the chopper left they played “danger zone” on the loudspeakers ?

Minnesota ended up with the win in a game that lasted eight hours, delays included:

And now there are three more games scheduled to be played, despite the temperature sitting in the low 40s and more rain in the forecast tonight. Hopefully the chopper didn’t go too far.