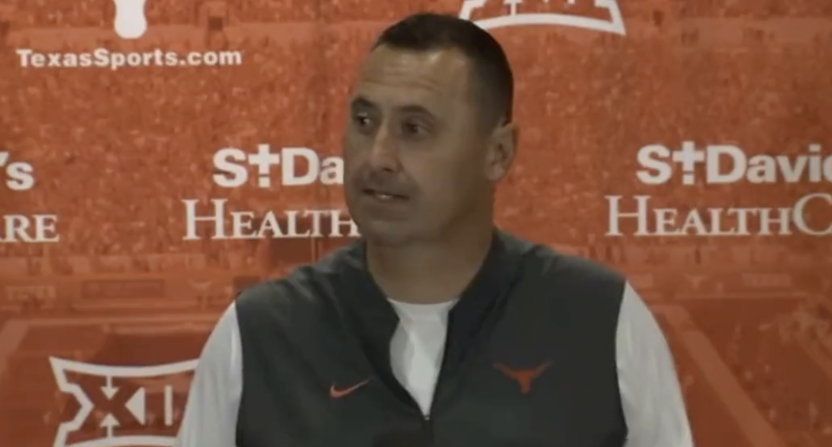 It’s been quite the first season for Texas Longhorns head coach Steve Sarkisian.

Sarkisian’s Longhorns have done what Texas always seems to do these days. They came into the year with a lot of hype and fell quite short of it. The Longhorns are nursing a 4-6 record following a catastrophic loss to the Kansas Jayhawks during a five-game losing streak. Despite the fact that the program made it official that they’re moving on up to the SEC, things continue to trend downward on the field. And we haven’t even mentioned the whole “assistant coach’s stripper girlfriend’s pet monkey Halloween biting incident” thing, which Sark had to publicly say was “not a distraction.”

So you would be hard-pressed to think the season could get any stranger for Sark. But then came Monday’s press conference, in which the head coach was asked one of the more bizarre questions in recent memory by Horns Illustrated’s Terry Middleton.

“Coach, couple years ago, one of my good friends and I were faced with a massive problem we couldn’t solve,” started Middleton. “In his wisdom, he said, you know, at this point we need to stop and ask ourselves, what would an extraordinary person do in this situation? This resonated with me the whole weekend. I realized that, of all the coaches who could be standing at that podium right now in those shoes, you are that extraordinary person. And you have a team of what I call coaching juggernauts. This is not only my opinion, this is a fact. I don’t think anyone could dispute this.

“So my question is, we write the Sarkisian Era story. We’re not even done with the first chapter yet. Can you unfold some of the onion of what are you working on, how are you solving this problem? I realize that you might not even know. But, you know, I’m gonna steal from Julian Edelman, ‘it’s gonna be one hell of a story.'”

Man, what we all wouldn’t give for a simple “talk about” question right about now.

First of all, credit to Sark for somehow maintaining a stoneface that entire time waiting for the actual question to illuminate itself.

Second, referring to a coaching staff that is currently 4-6 as a “coaching juggernaut” is a choice. And “I don’t think anyone could dispute this” is certainly up for debate.

Third, are we sure Middleton isn’t Sark’s brother-in-law or something?

Fourth, “unfold some of the onion?”

Fifth, in nine seasons as a head coach, Steve Sarkisian is 50-41. If he’s “extraordinary” what does that make Nick Saban? A Celestial?

You simply won't believe what I ask him. I pray I get the chance to ask a question. It is not a guarantee.

For the uninitiated, a quick check of Horns Illustrated’s Twitterfeed will quickly assuage you of any notion that it is unbiased. It’s a fan-centric outlet from the jump. That said, while the athletic department surely loves the support, it does call into question whether or not space needs to be made at the press conference for this kind of spin from someone who is supposed to be there to cover Sarkisian and Texas football from the journalistic perspective. Sarkisian is making over $5 million this year as the head coach at Texas, so he doesn’t need his hand held following tough losses.

Of course, schools and pro sports franchises already employ in-house journalists to tell the stories they want to be told and keep the coverage positive as much as possible, so it might be a moot point. But we can dream. And in the meantime, other college football journalists and media members certainly had their own reactions to the press conference question.

In 2021, I can't tell if this a relative of Steve Sarkisian posing as a reporter to distract and confuse everyone, someone who micro-dosed before walking into the presser, or just a dude asking an intentionally cringey question to promote his Austin improv group on social media. https://t.co/uCIXpGz6i3

What in the heck was this? Nothing will surprise me anymore regarding Texas football, including this “question” to Sarkisian https://t.co/01aIdhl66F

The question to Sarkisian could have been its own pod.

For his part, Middleton, who appears to be the person in charge of the Horns Illustrated Twitter account, is standing by his question. Responding to one person, he said that it was “not sucking up” but showing “respect for [Sarkisian].”

hmm, most interesting. A few facts

Not sucking up, it's respect for him, team, @UTAustin https://t.co/4aA2ZkMfWr

There are already reports and rumors out there that Sarkisian is on the hot seat and it’s only a matter of time before he’s fired. While some might find it hard to imagine Sark getting canned after one season, this is the University of Texas we’re talking about, and when their boosters want something bad enough, it happens. But in the meantime, Sark can rest easy knowing that no matter how bad things get, he’s always got a supporter in the crowd at the next post-loss press conference.