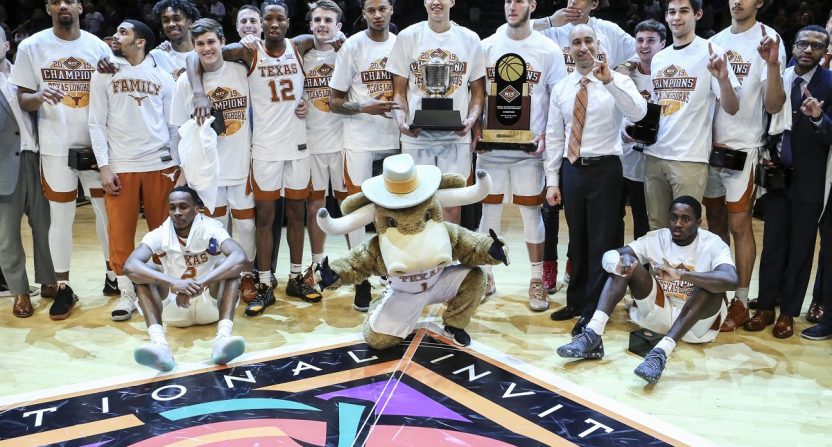 The NCAA will have the men’s and women’s college basketball tournaments this season, albeit in an altered format.

The men’s tournament will take place entirely in Indiana, while the women will play in Texas. It won’t quite be a bubble, but it will cut down on travel and exposure risks for everyone involved. We’ve known that for months, though. What we didn’t know is that the men’s NIT will indeed be happening, for reasons that are pretty tough to figure out.

That news was officially confirmed today, with the NCAA release noting that the 2021 NIT will have a 16-team field (down from 32), and no automatic qualifiers. (In normal years, teams that won a regular season conference championship but didn’t make the NCAA tournament field were automatically selected to the NIT.)

The real winner here might be ESPN, which will broadcast every game and be able to fill some otherwise sparse weeks in March with more basketball.

The 2021 National Invitation Tournament will feature 16 teams with all games being played in the Dallas-Fort Worth metroplex. The decision to conduct the NIT in one geographic location was made with the interests of having a safe and healthy environment for all participants.

Conference USA and the University of North Texas will serve as hosts for the 83rd NIT, and specific venues for each round are being finalized. Games will be played at Comerica Center in Frisco, Texas and at UNT Coliseum on the campus of North Texas in Denton, Texas.  First-round games will be played Wednesday, March 17, through Saturday, March 20. Quarterfinals also will take place Thursday, March 25. The semifinals and championship will take place Saturday and Sunday, March 27 and 28. 2021 also will feature a third-place game Sunday, March 28, which hasn’t been played at the NIT since 2003. All 16 games of the 2021 NIT will be televised on ESPN or ESPN2.

Teams and pairings for the 2021 NIT are scheduled to be released by the NIT Committee at 8:30 p.m. Eastern time Sunday, March 14, on ESPNU. Because of the reduced field size, all 16 teams will be selected as at-large participants, and there will be no automatic qualifiers for the NIT.

While it’s nice to point to the fact that the NIT will take place in one geographic site to reduce risk, there’s still an important question to ask on top of that: why play it at all? The NIT has a sort of throwback charm in normal years, and seeing small schools prove they should have been at-large picks (like Lipscomb showed on their run to the final in 2019) has some appeal as well. But we’re not getting automatic qualifiers this year, which means we’re probably going to see 16 mediocre major conference teams play in empty stadiums.

Of course, this isn’t a normal year, either. There are plenty of brand-name schools who aren’t normally available to the NIT; Duke, North Carolina, and Michigan State might all end up needing a secondary tournament. Indiana is also probably headed for this NIT, and maybe even Kentucky, though at 8-14 they might not even be considered for this version.

Regardless, it’s been harder and harder to justify the NIT’s existence in normal years, much less during a pandemic. But hey, if it can happen safely, there will presumably be an audience for more college basketball in March.