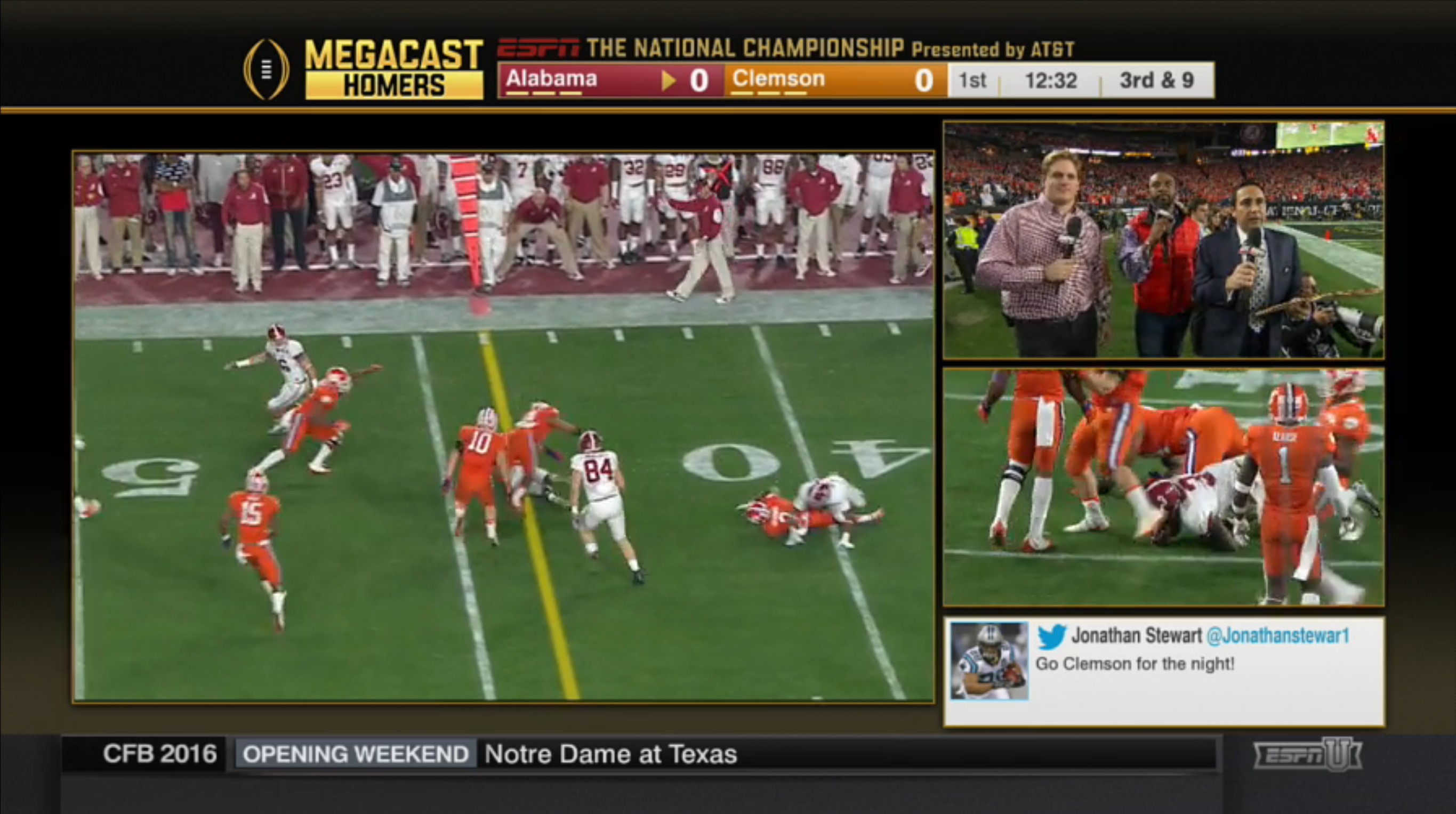 In all, ESPN will broadcast the championship game on eight different ESPN networks including ESPN Goal Line and ESPN3, plus Spanish-language telecast on ESPN Deportes.

The main broadcast, as usual, will be aired on the mothership, ESPN. Chris Fowler and Kirk Herbstreit will be in the booth and Samanta Ponder and Tom Rinaldi will be on the sideline for on-the-field interviews and coverage.

The most ridiculous broadcast every year is the ESPN Voices telecast on ESPNU, which features several ESPN personalities watching the game and giving their own running commentary on the game. This year, the featured ESPNers include Michelle Beadle and Marcellus Wiley of SportsNation, Keyshawn Johnson, and, to our sheer pleasure, Bill Walton. Hopefully, Teddy Atlas, who shined last year, shows up again.

The best news of all for those watching the coaches film room will be fewer commercial interruption. In past years, the commercials would roll just as some of the commentary from the coaches was really digging in, so it’s good to see that has been addressed this year.

Another good option will be aired on the SEC Network with Finebaum Film Room. This follows a similar strategy to the Coaches Film Room channel, but with a tad more of an SEC flair. Paul Finebaum will be joined by a pair of ESPN analysts, former Alabama quarterback Greg McElroy and Booger McFarland, as well as Florida head coach Jim McElwain (who was on the standard Film Room broadcast last year).

ESPN2 will be the designated “Homers Telecast,” with former Clemson quarterback Tajh Boyd and former Alabama offensive lineman Barrett Jones both returning from last year to provide their biased opinions, if you’re up for that. Joe Tessitore will be the play by play broadcaster for that feed, wit Adam Amin also chipping in. All four will call the game from field level.

Be sure to watch the game with your laptop nearby though, because ESPN3 will have some fun stuff for you, including the sky cam feed, two options bringing you the local radio call for Alabama and Clemson in partnership with Learfield Sports (this is a great idea), the commentary-free Sounds of the Game feed (also on ESPN Classic), the stats-heavy Data Center feed, and the potentially overwhelming Command Center feed (also airing on ESPN Goal Line).

ESPN will also have the game covered with plenty of social network updates on Instagram, Facebook and Twitter and more. How will YOU be watching the championship game? ESPN is giving you plenty of options to consider, and just like in previous years of the MegaCast, we’ll have a wrap-up for you on Tuesday.