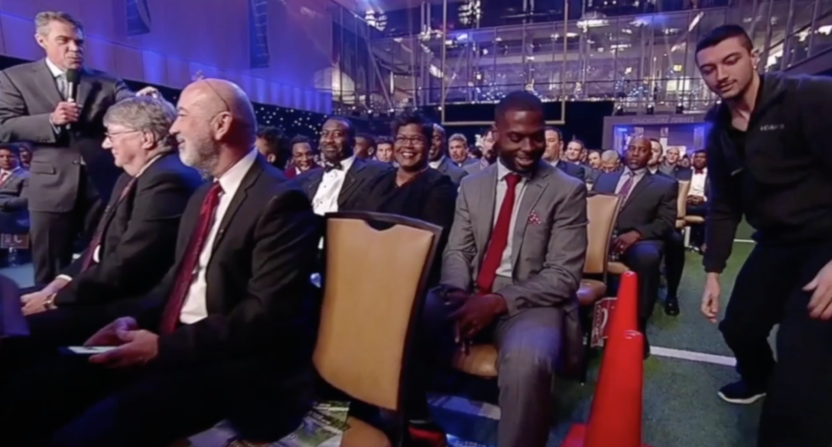 Last month, Ohio State quarterback J.T. Barrett tore his meniscus on the sideline of The Big House thanks to an apparent collision with a cameraman. And because the injury turned out not to be overly serious (Barrett played the following week in the Big Ten Championship Game), we can now joke about the whole thing.

ESPN hosted the College Football Awards Show on Thursday night, and host Chris Fowler poked some fun at the Buckeyes quarterback, a finalist for the Davey O’Brien Award. Fowler walked up to Barrett’s row, commended Barrett for playing through injuries, then said, “J.T., I want you to know, none of these cameramen on our staff are gonna get near that knee after that mishap at the Big House. We’ve created a whole safe zone for you. No one’s going to get close to you.” Barrett, meanwhile, laughed nervously.

At that point the cameraman who had been shooting a close-up of Barrett took several steps back, as someone ran up to place two giant orange traffic cones next to Barrett’s knee. Sure the protected knee wasn’t actually the one Barrett injured, but it’s the thought that counts.

OK, putting cones around JT Barrett’s knees to protect him from cameramen was funny. pic.twitter.com/evwmsCQkDw

As far as we know, Barrett escaped the award show without running into any cameramen.

All told, the traffic-cone bit was pretty funny, even if Barrett didn’t seem quite ready to laugh, and even if his coach is probably still busting blood vessels over the cameraman incident.