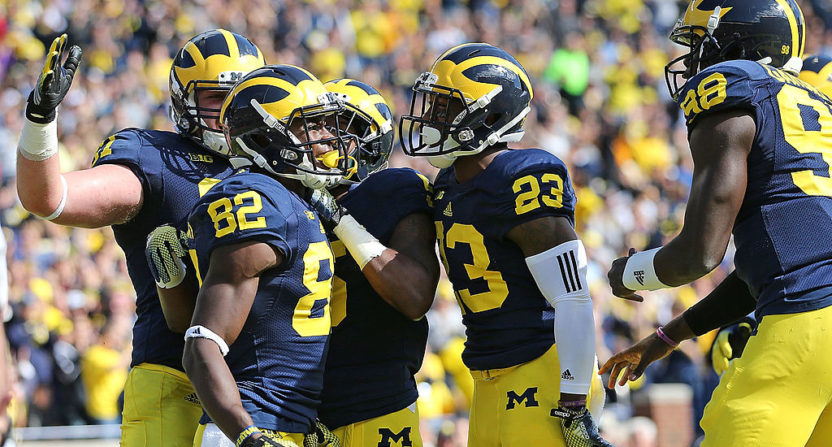 ESPN announced its schedule for the first week of the coming college football season Thursday, and… whew, is it impressive.

Within that first weekend, ESPN or ABC will air matchups featuring Ohio State, Michigan, Penn State and Wisconsin, the four presumptive Big Ten powers. That arrangement is interesting considering that 2017 is the first year of a deal between the Big Ten and Fox that gives Fox preference over ESPN in picking which games it wants.

Though no one has announced exactly how the Fox-ESPN game-selection process works, Ohio State’s 247 site has reported that, “Fox and ESPN would essentially hold a ‘draft’ to pick which weekend they would have the top choice of games. As the high bidder, Fox would get the first pick.”

Fox seems to have used the first pick of this “draft” to grab the annual Ohio State-Michigan rivalry game, and it also wound up with Penn State-Ohio State and Notre Dame-Michigan State. It appears ESPN focused heavily on securing a strong opening-week slate.

ESPN’s apparent decision to load up on Week One is consistent with its previous strategy of going all in on college football coverage during the only week of the season when there are no NFL games. As ESPN executive Nick Dawson told Awful Announcing last fall—when, unlike this year, the network lacked an A-list game during the second week of the season—it’s worth sacrificing in future weeks to come out strong at the start.

“If we’re going to suffer anywhere, if suffer is the right word, I’d rather come out of the gates Week One with something like we have this year and have a little bit of a dip Week Two than open with a whimper,” Dawson said.

ESPN might not have the greatest Big Ten games as the season goes on, but it made sure to stack its opening week.

UPDATE: After this post was published, a spokesman for ESPN emailed Awful Announcing to emphasize that Fox and ESPN will televise the same total number of Big Ten games and that ESPN will air high-profile Big Ten games throughout the season, including Ohio State-Oklahoma in Week Two.