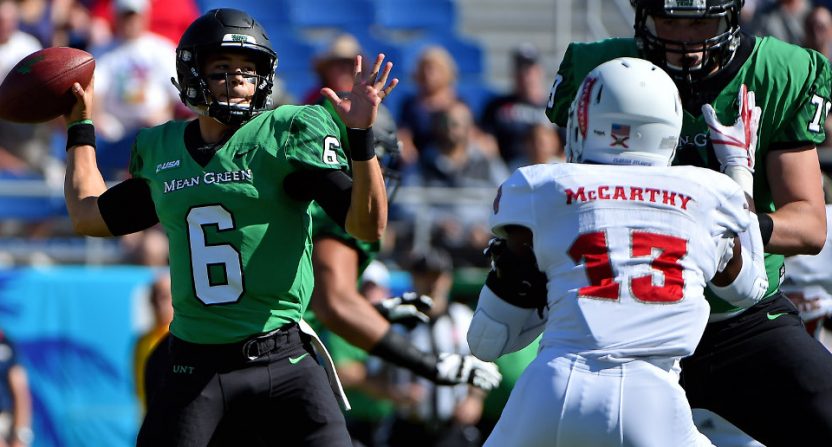 It’s a year of big changes for Conference USA, which has had all sorts of media partners over the years, from Fox, CBS and ESPN to beIN, American Sports Network and Stadium. Earlier this year, the conference announced a deal that made CBS their primary rights partner for football and men’s basketball, shifting some games that had been on ESPN (including the conference championship game) over to CBS Sports Network while also expanding their partnership with Stadium and having both CBS and Stadium produce some games exclusively for Facebook. Now, it turns out that ESPN will still be involved with CUSA as well, but only through its digital platforms, new over-the-top subscription service ESPN+ as well as traditional digital-with-cable-authentication service ESPN3. ESPN announced a new multi-year deal to show CUSA games on its digital platforms Thursday, and their release indicates it will involve plenty of content:

ESPN has further bolstered the college sports offerings on ESPN+ with a new, multi-year agreement with Conference USA. The digital deal will deliver more than 175 C-USA games to fans each year, including more than 125 combined football, men’s and women’s basketball games, with more than 100 of the total games on ESPN+ and the remaining games on ESPN3. In addition, ESPN’s digital platforms become the primary home of multiple C-USA Conference Championships, while also adding exclusive early round men’s and women’s basketball championship action.

…“As we look forward to the 2018-19 season and beyond, ESPN+ will offer the most expansive college sports lineup in the industry, right alongside professional leagues such as MLB, NHL, MLS and premier events from Grand Slam tennis, Top Rank boxing, UFC, the PGA Tour and more.” said Burke Magnus, ESPN executive vice president of programming and scheduling. “We are thrilled to grow our relationship with Conference USA and have its 14 member institutions as part of the impressive digital lineup which now features more games from the conference than any other network, including a significant number of post season games.”

Conference USA Commissioner Judy MacLeod said, “ESPN has continually positioned itself on the forefront of digital distribution and emerging platforms, which makes them an ideal fit for us. We look forward to sharing the C-USA brand with their extensive audience for many more years.”

Football is maybe the biggest part of this, and the deal will involve 45 CUSA football games this fall, with 32 of those on ESPN+ and the remaining 13 on ESPN3. A full schedule is included in the release. It’s notable that it doesn’t include a single game from 2017 conference champion Florida Atlantic; home games for Lane Kiffin and the Owls were probably snapped up by those TV deals with CBS and Stadium, and road games like their season-opening clash with Oklahoma and Sept. 21 game against UCF are dictated by the home team’s contracts, so those are set for Fox and ESPN respectively. But there are still some good games here, including Southern Miss at North Texas on Oct. 13 (those schools were 6-2 and 7-1 in conference respectively last year, with North Texas making it to the championship game seen above) and five games featuring UAB (the Blazers’ return to football in 2017 after a 2015-16 hiatus was a great story, especially as they went 8-5 overall and 6-2 in conference). And there is plenty of additional content here in other sports, including those early-round basketball championship games (the quarterfinals are on Stadium, the semifinals and finals are on CBSSN).

This is part of ESPN’s larger strategy in adding ESPN+ rights and getting more people to sign up for that $5 a month service, and college sports is a key part of that. Other conferences that will be featured on ESPN+ this year include the America East, Atlantic 10, Atlantic Sun, Horizon, Metro Atlantic, MAC, Missouri Valley, Southland, SoCon, Sun Belt and Ivy League. And while many of those conferences aren’t the largest draws out there, they all have some passionate fans; ESPN is betting that they’ll be able to get some extra subscriptions for ESPN+ out of this, both from those who have cut the cord or shaved their cable package down and also from those who have a full cable package, but want the extra games that are now behind this paywall.

A notable element of this is how some games will still be on ESPN3 instead of ESPN+. That has pros and cons for viewers; if you have ESPN and don’t have ESPN+, you’ll have access to those, but if you only have ESPN+, you won’t. And that’s similar to how other properties like the CFL have been split up, requiring both a cable subscription and an ESPN+ subscription if you want absolutely everything. Expanded ESPN+ content is great for those who have cut the cord, while ESPN3 content is great for those who have cable but not an ESPN+ subscription, but that mix means those who want it all will have to pay more. And that’s an important part of what ESPN’s doing with ESPN+; they’re making it not just a standalone service to attract cord-cutters and cord-shavers, but also one they hope those who still have cable will add as a supplemental service. Conference USA rights are just one piece of that puzzle, but they’re not a bad piece, and this deal may convince more fans of those schools that ESPN+ is worth the plunge.