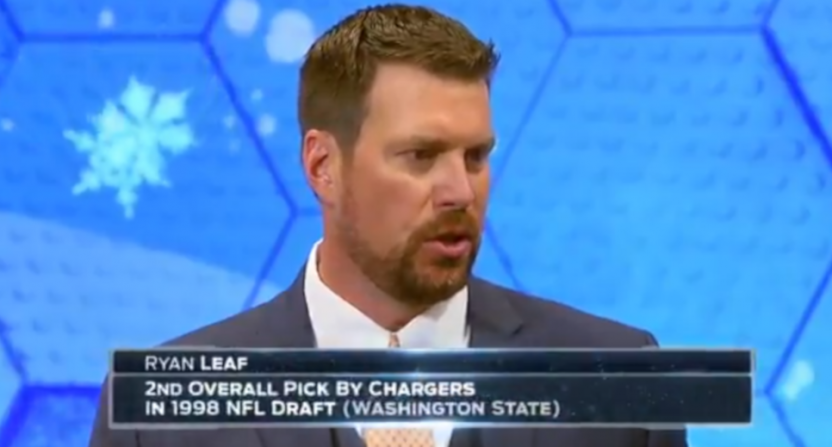 ESPN’s latest college football hire will be quite familiar to many. That’s Ryan Leaf, known for his remarkable college football career with Washington State, his #2 selection in the 1998 NFL draft, his subsequent lackluster four-year NFL career that’s led to him often being described as one of the top draft busts ever, his issues with substance abuse (which led to several burglary attempts to get prescription drugs and eventually saw him spending 32 months incarcerated, first in an addiction-treatment facility and then in jail), and his recent story of getting clean and pursuing a broadcasting career. Leaf worked for the Pac-12 Network last season and also hosted the Pac-12 This Morning show on Sirius XM’s Pac-12 channel, and he’s now joining ESPN as a game analyst. As Ralph D. Russo of The Associated Press writes, Leaf said getting the call from ESPN was a huge moment for him.

“I had to pull off the side of the road. I was really emotional. …Five years ago sitting in a prison cell I would have never imagined that I was going to be part of ESPN and the Disney Corporation. If you would have told me that I would have said you are absolutely crazy. And I can’t believe it. I lay my head down every night with a ton of gratitude.”

Thank you to everyone who supported me along this journey. Ton of gratitude in the Leaf household tonight. Thanks to @espn for giving a flawed human being a chance to be better today. #soberlife #cfb #letsgettowork pic.twitter.com/gsGC3x6W9A

This comes after quite the road for Leaf. He wound up in a lot of legal trouble in several different states over his attempts to obtain drugs, but has spoken since about how his time in prison convinced him to “change my life, 180 degrees.” As Mick Garry of the Sioux Falls Argus Leader relates, Leaf told the Addiction and Suicide: Communities in Crisis group in his native Montana last fall that he went through intense struggles, including a suicide attempt, but his eventual change was based on altering his worldview. He told that group “It had to be about other people, it couldn’t be about me ever again.” Leaf’s story was also explored in this 2016 feature from Fox’s Jay Glazer:

I'm in awe of humanity, you all help transform a life I felt was hopeless. #askforhelp @TranscendSL #Grateful pic.twitter.com/9k6E4dQ3vW

But it’s also interesting to see Leaf, a guy who had many prominent run-ins with the media during his NFL career in particular, now working as a member of the media. As Garry wrote, Leaf wasn’t expecting to go into media work after his retirement from the NFL given the way he battled with reporters there, but it’s something he’s embraced now.

“The last place I wanted to be was in a newsroom after I retired. It’s kind of karma now that now I’m a media member after how poorly I treated them for so long.”

And media work has worked out for Leaf. He was a broadcast journalism major at Washington State, and he told Russo it was one of the key paths he was considering after his 2014 release from prison, saying “I realized two things: I really wanted to do it and I really felt like I could do a good job at it.” That came after Leaf talked with and shadowed players-turned-analysts like Joel Klatt, Brady Quinn and Kirk Herbstreit, and he continued that last year, shadowing ESPN’s Greg McElroy around a Washington State-USC game last year. Leaf also told Russo he’s grateful to Glazer for support and mentoring, to Sirius XM’s Steve Cohen for building a show around him, and to ESPN’s Ed Placey for helping him through the process there.

And there should be some interesting times ahead for Leaf. Russo notes that he’ll be paired with play-by-play announcer Clay Matvick, and that he’ll be calling games mostly on ESPN2 and ESPNU this year. We’ll see how he does in this new role. But in any case, it’s certainly impressive that he’s rebounded from his low points and that he’s already found quite a bit of success in the sports media. And while his post-playing path may not be an unconventional one, that may make him even more notable as an analyst. He’s certainly already made remarkable progress in turning his life around, and this may be the next step along that road.

[The Associated Press, via The Seattle Times; screengrab from a 2016 Fox interview with Leaf]